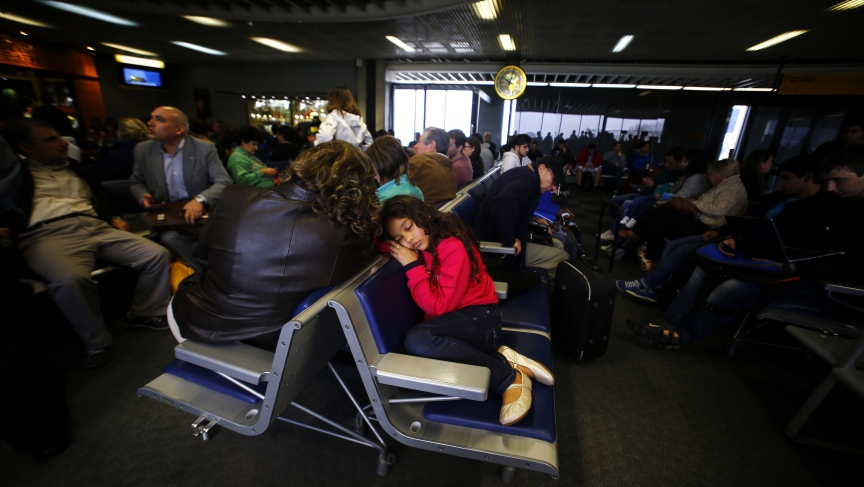 Passengers wait for their delayed flights at Alfonso Pena airport in Curitiba city.

After all, how can anyone enjoy it? There are travel restrictions, the TSA and delayed flights — and that's before thinking about plane crashes or hijackings or even just catching a cold from the guy next to you who can't stop sneezing.

Those are the things that go through Hearst's head every time he boards an airliner that "seems like it shouldn't be able to fly 30,000 feet above the ground."

To help ease his fears — and yours — Hearst composed a soundtrack for the tension-filled flight, called "Songs for Fearful Flyers."

Hearst wanted to create longer, soothing tracks that "didn't have jarring moments." For inspiration, he turned to Chopin, Philip Glass and "Brian Eno's Ambient 1: Music for Airports." He was also well-aware that his music would compete with the roar of the engines, so he needed to know what would "work in small headphones."

The CD begins with a song called "It's Only a Sound," then moves to "Marshmallow Clouds." And if the ride isn't as smooth as marshmallows, well, there's the track, "Like Bumps In The Road." The CD ends, of course, with "Baggage Claim," which features actress and comedian Whoopi Goldberg.

Her involvement came by chance while Hearst was working on a play. He confessed to the play's director how he was dreading an upcoming flight. The Air France Flight 447 disaster had just occurred, and Hearst was flying on another Air France flight.

The director knew Goldberg, another fearful flyer, and introduced her to Hearst over the phone. "All of the sudden, there's that voice that there's no mistaking," he remembers.

Whoopi offered advice: regulate your breathing, stretch and get rid of any toxic thoughts. As she was speaking, Hearst thought it would be great to get her "to say all this in recorded format, so I could set it to music."

Whoopi agreed, and Hearst made the album.