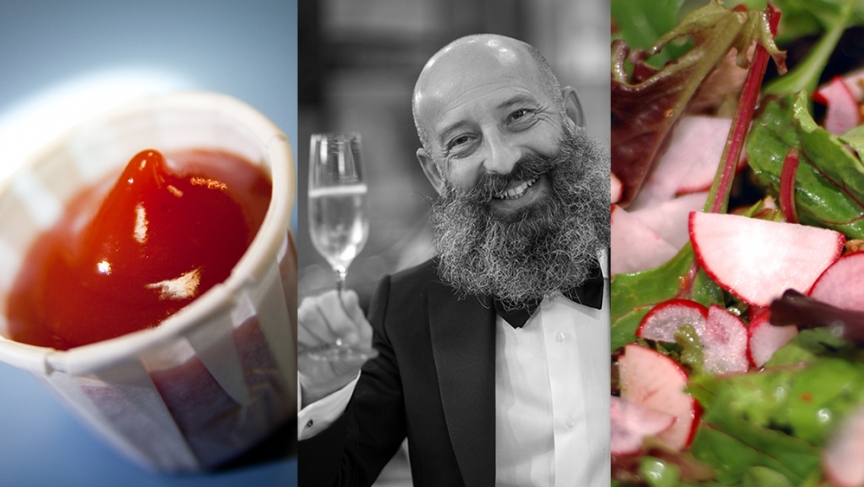 Where do the words "ketchup," "toast" and "salad" come from?

I didn’t think too much about what food I stuffed into my mouth when I was a kid, so long as there was lots of it.

No longer. Now I often want to know as much as I can about what’s headed for my belly: what the ingredients are, where they came from, and how they were put together.

Something else interests me too — the words we use for food. Dan Jurafsky is way ahead of me on that one: He’s a linguist at Stanford, and the author of "The Language of Food."

"It’s like we speak these words and we just look right past them," he says. "And in fact they’re telling us the history of our culture and our globalization, and the way we’ve been interacting for a thousand years.”

But most of us do look right past food words, so I thought it might be fun to run a little experiment.

I took my friends Adam and Jenny out for dinner at a local burger joint in Brooklyn. I asked them: Where do common food words like "ketchup" and "salad" come from? What would they guess? Oh, and I had Dan Jurafsky listen in on their linguistic guesses, to see how good their hunches were.

We began our meal by toasting Adam, who just got a new job. So where does "toasting" someone come from?

Adam thought that toasting might have something to do with toasted bread, or breaking bread with people. Jenny countered with the idea that it came from a Latin root and morphed into "toast" somewhere along the way, possibly through misspelling.

"So maybe it's from middle English," Adam offered, "like toostare, or something, and it was something you did with mead. Maybe you toasted your hops."

Dan Jurafsky, author of 'The Language of Food'

The mead idea was actually pretty close, Jurafsky says. "We used to drink, in the Middle Ages, sweetened mead with toast in it," he explains. "The drinks of the Middle Ages were much more hearty — people got a lot more of their sustenance from their wine and their beer than we do now. So toast in wine was a very common thing."

That drinking tradition then gave rise to slang phrases. "Sommewhere in the 18th century, it became the custom to talk about the society lady of the hour as if she spiced the party, just as the toast spiced the wine," Jurafsky says. "So we talked about her as the 'toast of the town.' And then we began to raise our glasses to those people — the glasses which still barely had toast in them, for not very much longer. So that's the story."

Alright, next up: what about the word "ketchup?"

Adam and Jenny had no idea. "Catch up?" But they thought it might come from Vietnam, or "some sort of Asian-type cooking." Like some sort of "fermented sauce," Adam ventured.

Jenny added a piece of pop culture trivia: "Wasn't there an episode of Mad Men when they were talking about ketchup as catsup? It's 'catsup,' right?"

Not bad. "Ketchup comes from Chinese, it was originally a fermented fish sauce," Jurafsky says. "You stick fish in a vat, put a lot of salt in, and you go away. It was made in Vietnam, Thailand, and in the southern part of China" — the region that traded with those two places.

"The fact that it's spelled in two different ways is usually a hint that a word comes from a language that may not have had the same orthography as us," he says. "So the fact that we spell with a ‘c-a-t-s’ or with a ‘k-e-t-c’ tells us that it was borrowed from Chinese, which of course didn't use the Roman alphabet.

The different spellings were yet another by-product of imperial competition: "English, Dutch and Portuguese sailors and traders who first encountered the word had to figure out a way to spell it," Jurafsky points out. "And so they all spelled it in different ways."

Ketchup found its way to Europe and then, in the late 19th century, America. And that’s where the tomatoes and the sugar got added — of course.

And one more: how about "salad?"

Jenny began by sounding out the word: "Sal-ad. But 'sal' is salt. That's not right."

"Maybe it is," said Adam in reply. "At another time, people probably salted a lot of things. I wonder if something salted that wasn't necessarily cooked, but was cured in somewhere using salt, lead to the word salad."

"Excellent!" says Jurafsky. "Salad indeed comes from salt. The Latin is erba salata, salted greens. And the word salt is there in so many of our words. Sauce and salsa and salami — they literally all just mean salted, as does salad."

Low sodium wasn't a big priority back in the old days, it turns out: "Before refrigeration, salt was our major means of preserving, so words like sausage and sauces [referred to] salting — ways to preserve foods."

Jurafsky’s work is a reminder that food words signify much more than food: They reveal the ways people have borrowed from each other down the centuries, passing things along this culture to that, transforming foods and ways of life along the way.

So as you settle down for your Thanksgiving dinner, just remember: there’s probably a little bit in there from everywhere. And what could be more American than that?

The World's host, Marco Werman, wants to know where the word "offal" comes from. Do you know the answer? Educate us on Facebook, or leave your own "food word mystery" in the comments.