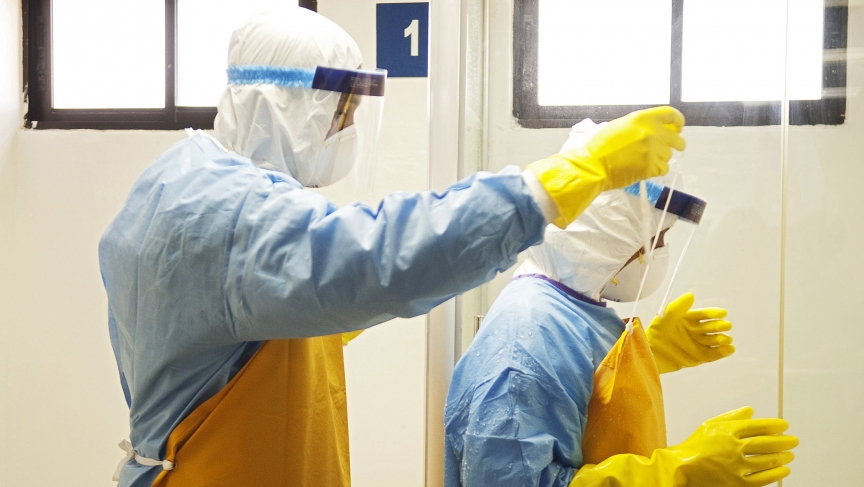 Doctors help each other with their protective suits during an Ebola virus drill in Santo Domingo, Dominican Republic.

For epidemiologist Sharon McDonnell, who arrived just over a week ago in Monrovia, donning her hazmat suit is both an indisputable necessity and a huge burden.

“I can only really compare it to when I was in Afghanistan, and I was trying to pass as Afghan and I had to wear a burqa,” she says. “I had a similar sense of being really separate from the world.”

For those fighting Ebola on the front lines, learning the proper precautions to take is just as important as caring for the patients themselves. But personal protective equipment — for Ebola doctors, that means hazmat suits — is incredibly limiting, McDonnell says.

“We learn hand washing, and then we wash our hands many times and show that we can do it right. And then we try the personal protective equipment and try to demonstrate that we can do it without being too much of a klutz,” she explains. “Because you actually lose a lot of vision, your hearing and your dexterity [when wearing the equipment] — which is useful in things like trying to practice medicine. … So we practice all week long in that protective equipment.”

McDonnell has been periodically checking in with The World during her stay to tell us about what it’s like on the ground in Liberia. For an epidemiologist like her, there’s a special set of concerns when it comes to protective measures, she says — namely, how easy it is for health care workers to maneuver within the equipment.

“As an epidemiologist, one of the things I have to do is pay attention to how long people can work in personal protective equipment, what can they do in the equipment,” she says. “We have to really pay attention to the kinds of things we want them to do while they’re completely geared up."

Luckily, doctors aren’t the only ones taking extreme precaution. Liberia passed a law requiring businesses to provide hand washing facilities to their patrons — generally, that consists of a .05 percent chlorine solution, McDonnell says.

She says these hand washing measures could stop not only the spread of Ebola, but other diseases, too — gastrointestinal and respiratory illnesses, mainly.

Some other measures — like the near-constant message of “don’t touch”— are being treated with a little more humor, McDonnell says.

“So now, if you want to come up to someone, the two of you have to figure out how to greet each other. Shall we bump elbows? Shall we bump feet? Maybe we’ll do a combination of both? You start doing a little dance with people.”