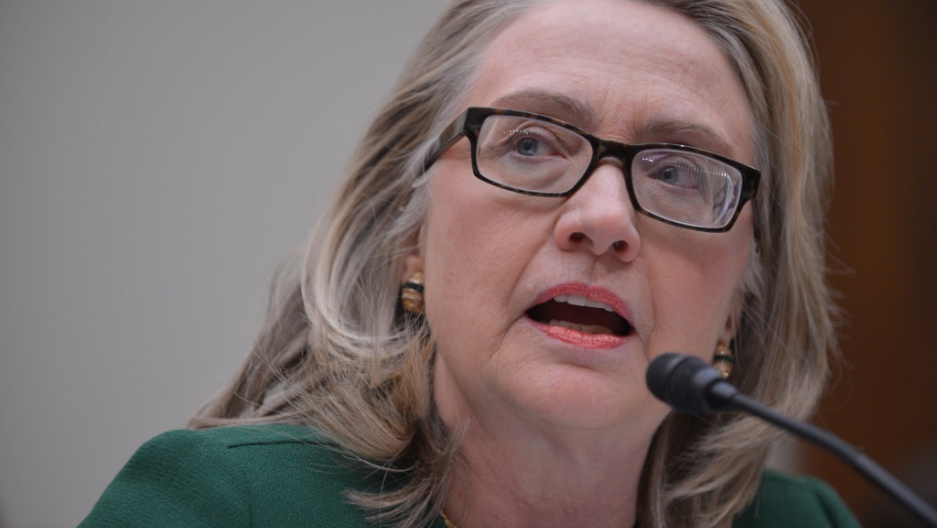 US Secretary of State Hillary Clinton testifies before the House Foreign Affairs Committee on the September 11, 2012 attack on the US mission in Benghazi, Libya in the Rayburn House Office Building on January 23, 2013 in Washington, DC.
Credit: MANDEL NGAN
Share

BOSTON – It was easy to miss the news about the House Intelligence Committee report on the fatal 2012 attacks on US diplomatic compounds in Benghazi, Libya.

It was released late last Friday afternoon, landing in the Saturday newspapers where all reports go to die. It didn’t get much play on any major networks, and definitely not on FOX News.

Maybe that’s because the report on the 2012 attacks left the Republican Party in the same spot it has been for a good two years: With little evidence to support their blistering criticism of how the Obama administration and the State Department, then headed by Secretary Hillary Clinton, responded to the assault.

This report, put out by the Republican-controlled Congress, was the sixth such congressional probe that has failed to turn up evidence of any willful attempt on the part of the administration to mislead the American public. This is despite the partisan drumbeat of bitter and often vitriolic criticism of Hillary Clinton and Susan Rice, who was the UN ambassador at the time.

The report also stated that the military gave no order to “stand down,” as Republicans have claimed, in responding to the attacks where four Americans were killed, including Ambassador J. Christopher Stevens.

On the issue of Benghazi, it seems the fog of war was overtaken by the toxic plume of partisan politics that engulfs Washington these days.

But through that partisan haze came a book released this fall that cuts through it all and sets the record straight. It is a book about what we call “ground truth” – an old-fashioned approach to reporting that sticks to facts gathered on the ground and told through the eyes of people who were actually there.

“13 Hours: The Inside Account of What Really Happened in Benghazi” written by Mitchell Zuckoff is an extraordinary work of non-fiction by a great reporter and former colleague of mine at The Boston Globe. Zuckoff is now a professor of journalism at Boston University and an author with three bestsellers under his belt, including “13 Hours.”

The book is a gripping, true account of the events of Sept. 11, 2012 from the minute the surprise attack got underway at 9:30 p.m. to about 10:30 a.m. the next morning. The book is told through the eyes, and indeed is coauthored by, the Annex Security Team, a group of six CIA contract operators who responded to the attack in Benghazi.

In a riveting narrative, Zuckoff tells of how the team fought to repel what appeared to be a planned assault on the compound by heavily armed attackers who were out to kill the Americans stationed there. But perhaps one of the strongest attributes of this book is not what it sets out to do, but what Zuckoff informs readers at the very beginning that the books is not about.

Zuckoff writes, “It is not about what officials in the United States government knew, said, or did after the attack, or about the ongoing controversy over talking points, electoral politics, and alleged conspiracies and cover-ups. It is not about what happened in hearing rooms of the Capitol, anterooms of the White House, meeting rooms of the State Department, or green rooms of TV talk shows. It is about what happened on the ground, in the streets and on the rooftops of Benghazi, when bullets flew, buildings burned, and mortars rained. When lives were saved, lost and forever changed.”

One central theme that this book confirms in devastating detail is that there was inadequate security at the compound and that this was reported up the chain of command. There were memos written and conversations had about the lack of adequate personnel, resources and equipment, but nothing was done.

This security failing – which arguably is the responsibility of both Secretary Clinton as head of the State Department and the Republican Congress that has relentlessly cut funding to State – has been cited in several of the previous congressional reports but was given a face through the men of the Annex Security Team.

So why is there so much focus on dragging Hillary Clinton over the coals on this without any substantive facts, when the much larger concern of safety of embassies still looms large?

Is there any sign that this partisan witch-hunt will ever stop?

“Not likely, I am afraid,” said Zuckoff on Sunday at a public conversation we recently shared before a gathering at the Jewish Community Center in Newton.

One sign that it is not over is the fact that Speaker John Boehner has created yet another committee to investigate, this time a separate, special committee to probe the rumors, the innuendo and the smoke and mirrors yet again. And this investigation has a reported budget of $3.3 million.

So amid all of the partisan noised around this issue, take a minute to quietly imagine if the millions of dollars that have been spent on these congressional reports was simply put toward better securing diplomatic compounds to prevent any such attack in the future.