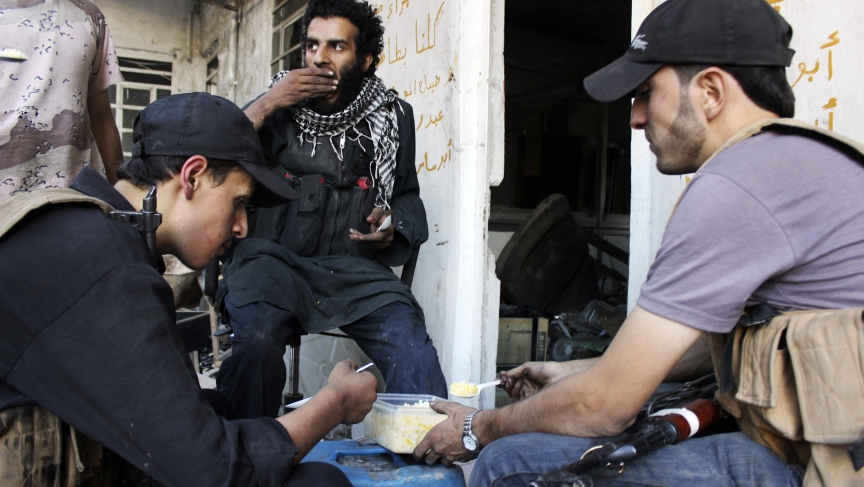 Rebel fighters eat in the Damascus suburb of Arbeen October 6, 2014.

A civil war completely resets the lives of people who manage to survive. Towns look different; families are torn apart. People often struggle with who they are, and how to go on.

In the case of the Syrian civil war, some of the Syrian rebels are already facing that struggle, as Raja Abdulrahim reported recently for the Los Angeles Times. In the early days of the war, some rebels decided to go by aliases, out of fear for their own safety and the safety of their loved ones.

But says as the war went on and many rebels either left the country or found themselves in areas no longer controlled by government, the aliases stuck.

"They've created these aliases and they've taken over their lives and personalities," she says.

Qusai Hayani, for example, goes by the nom de guerre Tony al-Taieb. Abdulrahim says a lot of the names the rebels chose have the term 'abu' in them, meaning father of, but Hayani chose a different path.

"At the beginning [of the war], the government was saying that it was a very sectarian uprising and it was all Sunni Muslims," Abdulrahim explains.

Qusai chose the name Tony because, in Syria, it usually signifies a Christian person.

"He had used it to try and encourage his Christian friends and to try and show that it was not just Sunni Muslims who are rising up," she says.

Then there's Abu Firas who, before the war, went by the name Abdulkareem Laila. Before the war, Laila was a shy, quiet man who couldn't find a permanent job and freelanced as a sociology teacher. Things changed drastically for him after the war.

He became a well-known media activist and one of the main spokesmen for the rebel group the Islamic Front. "He spends his time with commanders going to front lines and does interviews on satellite channels," Abdulrahim says.

But living under different names has created confusion for many of rebels.

"It becomes a real identity crisis," Abdulrahim says, "especially for those who end up leaving Syria but are still active within the opposition."

Those who leave, she says, start to find remnants of their former lives. Abdulrahim finds that even the rebels who say they've figured it out are still struggling with their pre and post-war identities.

"It's easier to inhabit these identities fully when you're inside Syria, living under daily bombardments and all the issues that come with living in a war-zone," she adds.