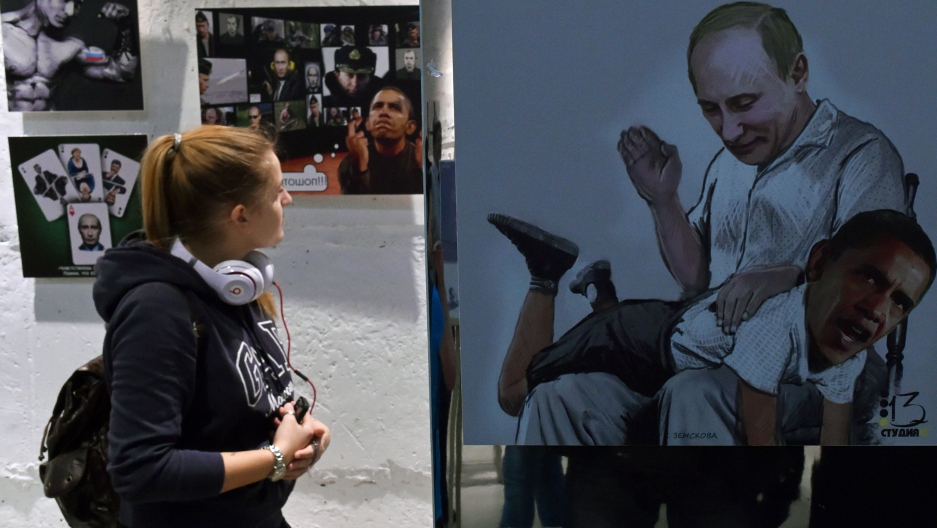 MOSCOW, Russia — Explosions, violence and social injustice: it’s not the Middle East, North Africa or eastern Ukraine, but Ferguson, Missouri — which is just how the Kremlin likes it.

As the world watches the Midwestern US suburb descend into chaos, Russia’s powerful state media machine is exploiting the disorder to highlight what it’s long argued to be America’s penchant for double standards, especially over the crisis in Ukraine.

Never mind deep-seated complexities of race relations and social identity. America beats its own citizens, and that’s all that matters.

“You want to export that kind of democracy?” the political scientist Alexander Domrin declared during a state television appearance on Tuesday. “Thanks, but no thanks.”

The Ferguson riots have received generous coverage in Russia by state-controled television, from which a majority of Russians get their news, ever since they first erupted last August.

They’ve been a gift to Kremlin propagandists keen on exacting payback for American support of Ukraine’s recent pro-democracy revolution.

Moscow bills that upheaval as a “fascist” military coup that ousted a key ally and installed pro-Western lackeys — a charge that rings absurd with most of the international community.

But now the Ferguson episode — which the state media here liberally calls “pogroms” — has presented the perfect opportunity to show just how contradictory America can be.

Igor Korotchenko, a defense analyst who’s become a key pro-government talking head, urged viewers on Tuesday to “draw a conclusion from the two-faced politics of the US.”

“In one case, they fan the flames [of protest] like they did on Euromaidan in Ukraine,” he said during a television talk show, referring to the protests in Kyiv. “But in the analogous situation at home, they behave extremely severely.”

“And that is what’s called American democracy,” he added.

Korotchenko and other Kremlin shills have even darkly warned that police brutality may lead to a larger rebellion. The popular tabloid Komsomolskaya Pravda ran a headline Tuesday asking, “Will Ferguson become Obama’s Maidan?”

The riots also make perfect fodder for the Kremlin’s well-funded English-language propaganda outlets, such as the television network RT, which are aimed at broadcasting Moscow’s official point of view to a massive global audience.

That’s especially important now, as Russia drifts further into global isolation over its support of the separatist rebels in eastern Ukraine.

Sputnik, the sleek new international arm of the flagship state media agency Rossiya Segodnya, ran a story on Tuesday discussing how more American citizens were killed by police in the last decade than died during the Iraq War.

The report, which contained little discernible news, cited a 10-minute American documentary on police abuse produced more than a year ago.

“These numbers are shocking, especially since the Iraq war is considered by the American public as having been incredibly brutal and bloody,” the report said.

“But it seems that there is an even more brutal war waged against US citizens — by US police, on American soil.”

Meanwhile, top Russian officials took aim at what they’ve consistently described as America’s unilateral sway over much of the world.

Parliament speaker Sergei Naryshkin even suggested on Tuesday that NATO should kick the US out of the military alliance to ensure greater stability in Europe.

He went on to slam Washington for creating more problems in the world than it’s solved.

“One must say they’re paying for it today, tied down as they are in many unresolved conflicts at once,” the TASS state news agency reported him as saying.

For most, however, it was a prime opportunity to employ the tried-and-true Soviet tactic known as “whataboutism” — deflecting criticism by pointing to your opponent’s own internal problems. Race relations were once a key component of this strategy.

Some even saw a chance to turn Ronald Reagan’s infamous term for the Soviet Union against their old adversary.

“America is an evil empire not only in relation to the entire world,” tweeted Dmitry Agranovsky, a leftist opposition lawyer who supports the Kremlin's Ukraine policy, “but in relation to its own people.”