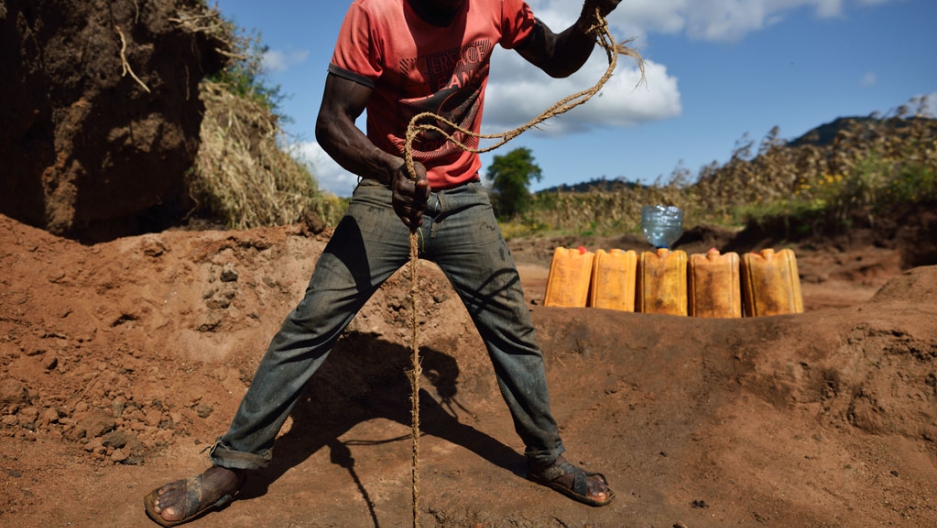 Editor's note: This is Part One of a series produced by The GroundTruth Project for GlobalPost, funded by the Galloway Family Foundation. Part Two, which explores the early warning signs that the water project was failing, will be published on Tuesday, November 25.

MLANDA, Tanzania — During dry season, students walk on the brownish-red sand, passing a water pump adjacent to the school buildings. The plastic bag covering the nozzle is a reminder for the central Tanzanian village of Mlanda that water has not flowed from it for years.

Outside the school, a bright yellow bucket sits atop the head of a young girl, moving slowly across the limitless landscape. Adila is returning home from a two-kilometer walk to the nearest water source — a ground well where farmers take their livestock to drink — to fill the 20-liter bucket. She too passes the barren pump and the classroom where her classmates sit to learn.

Adila will miss class this afternoon, like she does nearly every day. She must carry the water home before turning around and heading back to school.

Speak with Tanzanians today, and you’ll hear them describe an ambitious dream: to shed the country’s 60-year legacy as a “third world” nation, and emerge as a thriving middle-income one, despite allegations of a culture of government corruption that has led donors to suspend close to $500 million in budgetary aid.

For some, achieving the goal of a middle-income Tanzania begins with water. The single broken-down pump in Adila’s home village of Mlanda is one of thousands across Tanzania. In 2007, the World Bank joined an unprecedented drive the Tanzanian government had launched in 2006 to fix its water crisis once and for all. In the past, international donors funded different projects in the country’s water sector.

This time, the World Bank would provide Tanzania with the financial and technical support to organize them to pool their money together, in a grand experiment that combined rural and urban water resource management into one plan.

To date the drive has attracted more than $1.42 billion — including $200 million in direct budget support from the World Bank as well as funding from various other donors and the Tanzanian government — an incredible sum for a single project in a small country like Tanzania. The initial goal was ambitious: to bring improved access to water to 65 percent of rural Tanzanians and 90 percent of urbanites by 2010, and continue until each and every citizen had safe drinking water.

By all available metrics, the project has failed: In 2007, only 54 percent of Tanzanians had access to what is called an improved water source — a water point, like a well or water pump, that is protected from contamination. By 2012, that figure had actually decreased to 53 percent, according to the latest available World Bank Data. Coupled with Tanzania’s rising population, 3.5 million more Tanzanians lacked access to improved water than did before the project began. Others are at immediate risk of failing as communities find themselves unable to raise the money to fix and maintain them. Experts across Tanzania’s water industry say the program is failing to address the fundamental challenges that have plagued Tanzania’s water sector for decades.

They are only trying to intervene for a short time — ‘let’s keep the system working for a couple years,’” says Herbert Kashililah, chair of Water Witness Tanzania. “If I am from the World Bank, it is easier to count new projects than try to ensure people are running their own systems."

The World Bank defends the program, arguing that despite its slow start and the likelihood that some water points will stop working, it is better than doing nothing.

The problem of providing rural water around the world hasn’t been cracked,” said Philippe Dongier, World Bank country director for Tanzania. “You could say, ‘if that’s not going to be sustainable, why should we build it?’ But that could be said all over the world.”

A World Bank spokesman in Washington interviewed Monday said that while the data used to analyze the initiative is "factually correct," it combines rural and urban data. The spokesman said that combined data can hide some of the overall successes the project has had in improving access to clean water in rural areas.

The spokesman added that the government, with support from the World Bank, had brought access to 8 million more people in rural areas through this initiative. But due to an increase in population, when viewed as a percentage, access to clean water has actually decreased in Tanzania.

And so governments and international financial institutions continue investing hundreds of millions of dollars to keep the project going, despite evidence that it hasn’t succeeded. Plus $102.9 million more has been committed to the program in the past year alone, and the deadline for completion of the first stage has been extended for a third time, to December 2015.

Meanwhile, revelations about the transfer of $122 million from Tanzania’s central bank into overseas private accounts led a dozen funders, many of the same ones who backed the project, to halt payments. The money was sent by the state-owned power company TANESCO to IPTL, an independent power company. Both groups say it was legal, but opposition politicians and watchdogs cried foul.

Allegations of a cover up have dogged the government and they got louder as the prime minister asked for parliament to cancel debating the corruption allegations earlier this month.

Why is such an unprecedented project lagging behind its lofty goals? And why does the World Bank continue to solicit hundreds of millions of dollars for it?

An investigation undertaken by The GroundTruth Project for GlobalPost interviewed more than two dozen government and World Bank officials, Tanzanian water engineers and independent experts along with community leaders in places where water projects were to take place.

Only recently have steps been taken to address the worst of the challenges. Meanwhile, millions of Tanzanians in villages across the country are clamoring for improved access to water and demand accountability for the millions of dollars in loans.

Their cause is urgent: In 2004, 32,665 Tanzanians died from illnesses directly related to poor water, sanitation and hygiene, according to the World Health Organization, accounting for a startling 12 percent of all deaths that year for any reason. That’s 9,000 more water-related deaths than in neighboring Kenya, which has roughly the same population.

The project’s failures thus far raise serious doubts about the ability of international donors to achieve lasting progress anywhere, even as institutions pour billions more dollars into global water pipelines. In Tanzania, the setbacks have a direct impact on millions of Tanzanians.

For Adila, it means time away from school, the risk of falling behind her classmates and a cascade of negative consequences that could continue the rest of her life. And she is but one example of a problem facing an entire country.

Clarification: This story first reported that 3.8 million more Tanzanians lack access to improved water now than in 2007. That number has been recalculated using 2012 population data from the World Bank. This more accurate calculation shows that 3.5 million more Tanzanians lacked access to improved water in 2012 than in 2007. This data point was calculated using 2007 and 2012 water access data and 2007 and 2012 population data for Tanzania from the World Bank.

Two weeks after this story was published, the Tanzanian Water Ministry challenged the claims made in this story in a letter to GlobalPost. The GroundTruth Project re-examined their presentation of the data in light of these concerns and found that the reporters fairly characterized the failings of this project to date.