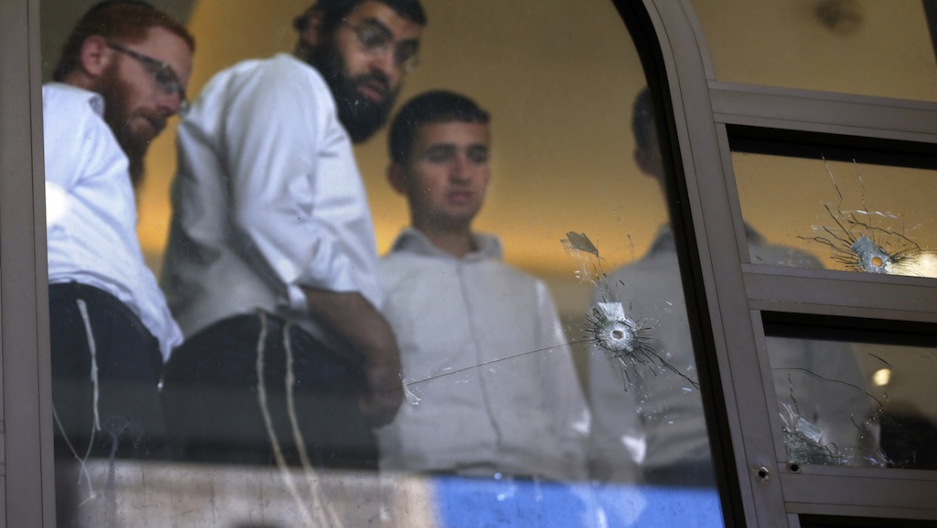 Ultra-Orthodox Jews look at bullet holes in the main window of a synagogue in Jerusalem which was attacked the previous day by two Palestinians armed with a gun and meat cleavers.
Credit: Thomas Coex
Share

The attack on a Jerusalem synagogue last week, where two Palestinian assailants wielding guns and hatchets killed five Israeli men and wounded seven more, has left Jerusalem shocked and fearful that a cycle of religious violence is underway.

For many, that the attack happened in a synagogue, against four worshipers who were mid-prayer, has made it all the more horrifying. The fifth Israeli murdered was a policeman responding to the scene. Both of the Palestinian attackers were killed by police.

As images began to circulate of the blood-stained prayer books and shawls, several news orgnizations published accounts that compared the attack to the anti-Semitic pogroms of Russia, where Jews were killed for being Jews.

Why does it matter that the backdrop for this gruesome attack was one of holy worship? After all, there should be no moral difference between those who murder innocent people on a bus, or in prayer. A life is a life, right? Yet whenever acts of terror happen in prayer spaces, whether it the Israeli settler Baruch Goldstein’s 1994 rampage that killed 29 Palestinian Muslim worshippers in Hebron or the 2012 Sikh Temple shooting in Wisconsin that killed six, a particular kind of outrage is sparked.

There are two ways to understand this visceral reaction. For the faithful, spaces of worship are akin to God’s embassies on earth, and within them worshipers are supposed to be safe. Perhaps more tangibly, places of worship are uniquely potent sites of identity.

The site of a synagogue specified the identity of the victims in ways more strongly than when acts of terror happen in public spaces. At an inter-faith gathering yesterday morning, the Bostoner Rebbe of Jerusalem, one of the founding rabbis of the neighborhood where the attacks occurred, referred to those killed as being killed "al kiddush hashem," for the sanctity of the name of God, as they were "murdered while praying."

The Rebbe, Mayer Alter Horowitz, also called upon his community to increase acts of loving-kindness in memory of what he called "martyrs." To be killed while wrapped in a prayer shawl and tefillin, or black prayer straps which metaphorically bind the worshiper to God, is to be “martyred,” he said.

That holy spaces in particular should be free from the taint of everyday violence and politics is ancient, going back to the Greeks and their documents of “sacred law” which forbid the carrying of weapons or wearing of armor in sanctuaries, or in some cases even bringing any iron into the space, reminiscent as it is of weaponry. Harvard University professor of classics Paul Kosmin said,“there are famous moments in Greek history where attacks on sanctuary are absolutely considered more heinous, as a form of symbolic violence.”

Kosmin added that symbolic violence “is always more vicious because it is meant to carry a broader message.”

In the biblical book of Chronicles, King David tells the people he was forbidden by God to build the First Temple on the Temple Mount (itself a persistent site of conflict today), because as a man of war he had shed blood, and was thus unfit.

This impulse that violence and worship should never mix carried through the Middle Ages, where Europe's accused and convicted Christians could claim sanctuary in a church. A church’s walls were revered by Christians as the boundaries beyond which man’s law could not pass. University of Madison, Wisconsin professor Karl Shoemaker explained that the sanctuary of a worship site is “born out of a notion that the church as an institution should be independent from royal authority or secular authority, and outside the framework of the everyday world of politics.”

The ancient world had a complicated system of recognizing and respecting each other’s sanctuaries. There was agreement that no violence would enter a sanctuary, a complicit understanding that persisted through the world wars, keeping the Vatican and other churches intact despite the bombings that devastated Europe.

Last Tuesday, that understanding was broken once again. That it happened in a synagogue in Jerusalem, a city with overlapping sacred space revered by Muslims and Jews, Palestinians and Israelis, sadly came to nobody’s surprise.

On Friday, as police and army flooded the streets Jerusalem, Israeli security officials reportedly said that it could take months to secure a sense of calm. For now, it seems, both Israelis and Palestinians are united only by fear that the situation could escalate and by a hope that it does not.