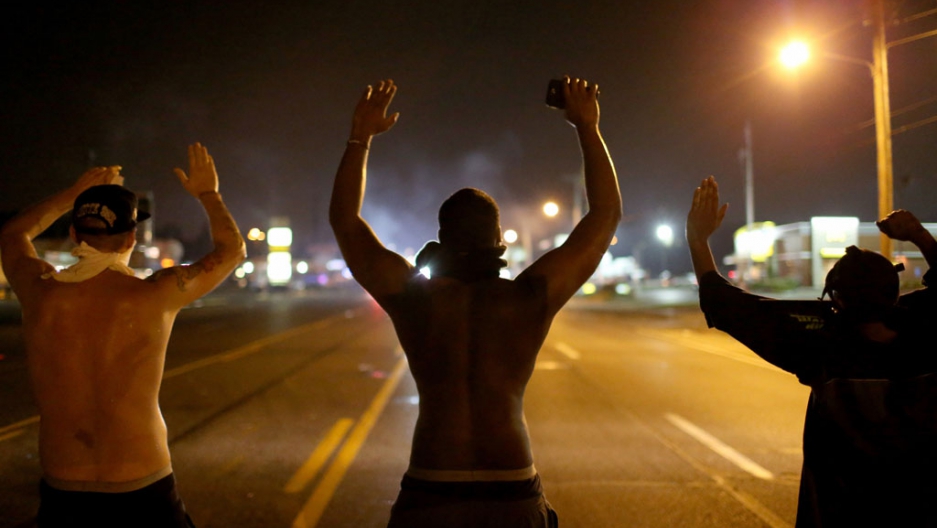 Demonstrators raise their arms and chant, 'Hands up, Don't Shoot', as police clear them from the street as they protest the shooting death of Michael Brown on Aug. 17, 2014 in Ferguson, Missouri.
Credit: Joe Raedle
Share

Update: The grand jury decided not to indict Darren Wilson, sparking protests across the country. We asked readers for their reactions. Click here to jump to that section of the story.

On Aug. 9 in Ferguson, Mo., Darren Wilson, a white police officer, shot and killed Michael Brown, an unarmed black teenager. Brown's body was left in the street for four hours.

Brown's killing was a familiar American tragedy in a country where young black men between the ages of 15 and 19 are 21 times more likely to be shot by police officers than young white men of the same age.

But it became a global story when local police — outfitted in tactical hardware that made them seem more like an occupying army than a force meant to "protect and serve" the people — cracked down on protesters and arrested journalists. While cops were firing rubber bullets and tear gas at demonstrators, Missouri governor Jay Nixon established a curfew to keep people off the streets.

Fellow justice-seekers expressed solidarity. Palestinians, accustomed to surviving under military occupation, tweeted advice to Ferguson protesters about how to deal with tear gas, even as Israeli air strikes were demolishing Gaza and killing thousands of Palestinian civilians. Hong Kong protesters, who began their pro-democracy demonstrations more than a month after Brown's killing, adopted the "hands up, don't shoot" as a tactic in homage to the Ferguson protesters.

Countries that the US has often accused of human rights abuses seized on what seemed to be a moment of glaring hypocrisy. North Korea called the US “a graveyard of human rights” where “people are subject to discrimination and humiliation due to their race, and are in constant fear that they may get shot at any moment."

China’s state news agency Xinhua published an editorial saying the US had “much room for improvement at home” and that it should “concentrate on solving its own problems rather than always pointing fingers at others.” And Egypt, sounding more like the United Nations than like a country that routinely kills protesters, called on the US to respect demonstrators' rights of assembly.

The world is still watching as a grand jury prepares to announce in the coming hours or days whether it's decided to indict Darren Wilson. At GlobalPost, we reached out to non-American readers to find out why it matters to them.

From Israel, Elizabeth Tsurkov sees parallels in law enforcement tactics and the treatment of Palestinians and African Americans:

So about Ferguson, in Israel we're going through something very similar. People focus on the occupation when they think of Israel, but we have other problems too. Israeli police has been caught on tape assaulting unarmed civilians who had angered them. A lot of that violence and even torture in detention is directed toward Palestinian citizens of Israel. Recently, a video surfaced of police shooting a Palestinian-Israeli man who attempted to assault their vehicle with a knife, but he was shot when he was walking away from the car and posed no danger. This caused a huge uproar among Palestinians in Israel and Israel witnessed riots and protests just like after Ferguson. Just like in the U.S., police brutality and racism intertwine and in both countries, cops get away with violence against minorities. I think that unless racism is addressed in the general society, nothing will change.

Police killings of unarmed youths everywhere reverberate with Greek audiences, because of the killing of Alexandros Grigoropoulos in December 2008, which sparked month-long protests and riots, and resulted in the life imprisonment in the officer who fired the lethal shot. Militarized policing and police brutality, especially, as well as the "limited" curtailment of constitutional rights over protests, as seen in Ferguson in the past few months are also familiar, recalling scenes from Keratea, Skouries, and most recently Athens' Exarchia district. Greek youths see the same tactics deployed by "their" state against them propagated around the world, and no prospect of justice without protest, no prospect of peace without justice.

What really shocked me and many others abroad were the images of the police, when they decided to show up in military gear and point sniper rifles and automatic weapons at people simply protesting. It points to a great lesson about inequality and poverty: that not only it is the main drive of how policing impacts on the everyday life of poor people (in this case, murder), but also the lengths to which they will now go to make sure dissent out in the streets is not tolerated. Militarisation of the police to such an extent, would not be tolerated in a society in which an underclass hasn't been accepted as a permanent feature, which is unfortunately the case with the US and other Western democracies.

Shireen Ahmed, from Canada, forcefully argues that that Ferguson pulls back a veil of hypocrisy in the United States when it comes to human rights, law, and equality.

Beginning with the senseless death of Mike Brown, it has been angering to watch the events unfold in Ferguson. Protestors are villified; groups in solidarity are being accused of co-opting the calls for truth and justice, and gun sales in the region have risen dramatically ahead of Grand Jury decision warning of imminent violence. America claims to hold "freedom" in the highest regard. Yet, it stomps through much of the world, under the guise of protecting said freedoms, while exploiting resources and turning a blind eye to humanity that doesn't profit. Meanwhile, at home it allows the killings of innocent black men and continuing systems of institutionalized racism through police brutality is almost laughable. American "freedom" is laughable.

And Ana Zárraga from Venezuela:

"I have been following Ferguson since protests erupted in August. Couldn't believe that the country that wants to champion freedom of speech abroad, has allowed the excessive use of force by police against protesters.

San Francisco-based Canadian Sana Saeed thinks Ferguson is a watershed moment when it comes to this race, policing, and justice:

Ferguson is a watershed moment; it's not just about the murder of Mike Brown but about a culture and system of brutality and violence towards people of color — especially Blacks, for whom the modern Us prison and police system was meant to enslave. Ferguson is about rising up against that and pushing towards real justice, real reconciliation and ending the silence on this violent pandemic.I'm following it because that very same system of enslavement and oppression of Black Americans is what also continues to churn the culture and system of Islamophobia in the United States

GlobalPost's Twitter followers said similar things when I asked them why they were following Ferguson.

From Karachi/Toronto, concern about racial oppression:

@timmybicicleta @GlobalPost Yes I am. Coz I am concerned about racism hatred and bias towards any one group of people!

From Ireland, more interest in Ferguson as part of a single, global movement for justice:

@timmybicicleta @asteris justice is an international quest. Spreading the truth & solidarity so important

From France and London, analogies to widespread police militarization:

@timmybicicleta @ElSnarkistani I am. Can make a parallel with current riots happening in France after police killed a student protester.

@timmybicicleta @ElSnarkistani different responses but we are seeing a rise in the militarization of police equipment as well here. Strange.

@timmybicicleta @oemoral London b/c here too rule of law not colour-blind. Appalled by militarisation of police & demonisation of protesters

And also from London, a comparison between Ferguson and Guantanamo Bay prison as harming US image and influence abroad:

@timmybicicleta @GlobalPost It allows regimes elsewhere to point at Ferguson (& Guantanamo etc) and say "why should we listen to you?". 2/2

There you have it. Many voices from many places with one message: Ferguson is about global justice, not just justice in the United States.

We checked back in with our readers to see what non-Americans thought about that decision.

From Scotland, a short summary of what many people are feeling today:

From Birmingham, England, feelings of inevitability and yet shock at how McCulloh delivered the news:

@missyasin Sadly predictable from the moment the last shot was fired. The arrogance & cynicism of the *prosecutor's* statement though... wow

From Canada, the American justice system is poisoned by systemic racism:

@missyasin jury decided not just on wilson's guilt, but on whether young black lives r worth all the "fuss." Justice system needs reform.

From India, oppression of marginalized groups seen in Ferguson is a global problem:

@missyasin just awful. it is the same system that oppresses underprivileged and vulnerable communities in India as well - muslims dalits OBC

@missyasin: Fully expected. Now cops equipped to invade Iraq have turned up demanding an end to peaceful protest?! Land of the free my ASS!!

From Australia, a call for police reforms at the highest level:

From Cairo, Egypt, a place that knows police violence:

@missyasin ALL COPS ARE BASTARDS

And from Brisbane, one word that says so much: