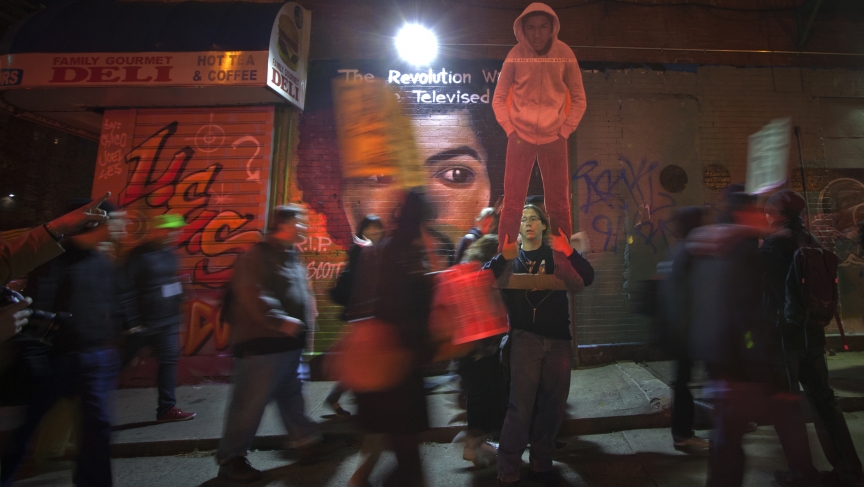 A mural showing Gil Scott-Heron and his trademark phrase, "The Revolution Will Not Be Televised," is the backdrop for protesters marching through the streets of New York in 2012, demanding justice for slain Florida teenager Trayvon Martin.

American jazz poet Gil Scott-Heron wrote his proto-rap song "The Revolution Will Not Be Televised" in 1970. But the title phrase has became so widely used since that it's practically a protester cliche — but that doesn't take away from its enduring power.

"You see it everywhere from Tahrir Square in Cairo to the streets of Kiev," says Marcus Baram, who wrote a biography of Scott-Heron, "everywhere from the Occupy movement three years ago to Ferguson." And it gets continual updates: "It's become 'The revolution will not be televised — but it is being tweeted' and videoed and shared in innumerable ways on the Web."

Baram believes Scott-Heron, who died in 2011, would be pleased to see his trademark phrase all over the frontlines of social activism: "Gil always felt the song was misunderstood by people, because people took it literally, 'The revolution will not be televised,' — it will not appear on TV.'"

"What he was saying was that you have to be active, you can't be a passive participant in the revolution," Baram says. "When the revolution happens, you're going to have to be in the streets. You just can't sit on your couch in your living room and watch it on TV."

Baram's new biography, "Gil Scott-Heron: Pieces of a Man," chronicles the life of the poet whom many call a forefather of modern rap. The book provides the backstories for Scott-Heron's most enduring songs. One of them, "Johannesburg," became a rallying cry for anti-apartheid efforts in America after its 1976 release.

Scott-Heron finally made his first trip to South Africa in 1998, during Nelson Mandela's presidency. "When [he and his musical partner, Brian Jackson] played at Johannesburg's FNB stadium in front of tens of thousands of people, they got to the chorus, 'What's the word?' and there was dead silence," Baram says. That's because "Johannesburg" had been banned by the apartheid regime, and most South Africans had not become familiar with the song.

Scott-Heron's career had stalled in the United States by the 1990s, but the singer still drew impressive crowds when touring abroad. "He would perform at stadiums in the UK, Germany, France and the Netherlands," Baram says. "And then when he was back in New York, he'd perform at small nightclubs or even bars, and to much smaller audiences, which really affected him."

Despite his incisive critiques of his country, Baram says, "I think he was depressed about that, because he was a proud American in many ways — even though he was so critical of injustice in this country."