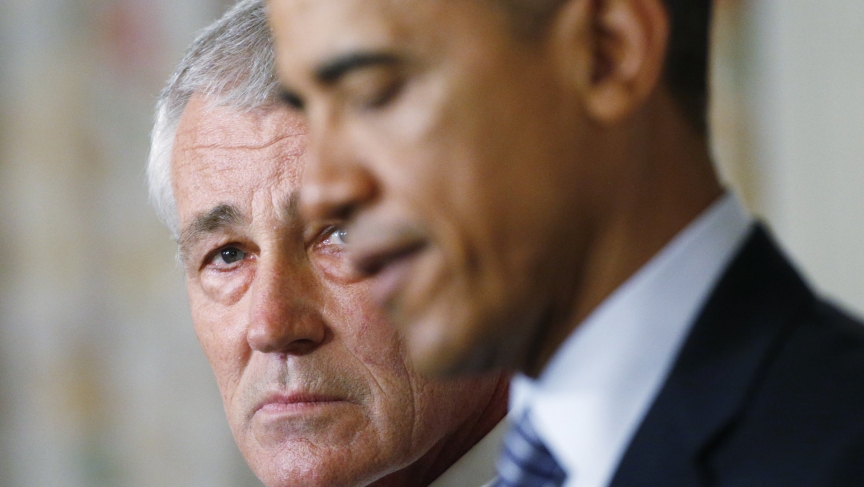 Did he jump or was he pushed? That’s a question you could ask right now of Chuck Hagel — whose resignation as secretary of defense was announced Monday.

Hagel and President Barack Obama appeared together at the White House Monday morning to announce Hagel's departure from his post. They were nice and polite, full of mutual gratitude.

But reports of tensions behind the scenes have been mounting for weeks.

“He jumped after he was pushed,” says Craig Whitlock who covers the Defense Department for the Washington Post. “Clearly President Obama didn’t have a lot of faith in his performance.”

“I cover the Pentagon,” says Whitlock, “and I know Hagel was not looking to get out. He was someone who thought and hoped he could serve for the remainder of President Obama’s term. The president clearly decided otherwise.”

Whitlock says there are multiple reasons for Obama’s decision. “The Democratic Party just got thumped in the mid-term congressional elections,” says Whitlock. “And there was a lot of questions about Obama’s foreign policy and national security strategy, particularly in the Middle East with the Islamic State, but also Afghanistan. So Obama has been under pressure to make some changes, to show that he’s got a coherent strategy. And a lot of times you need a fall-guy in a situation like that.”

Whitlock points out the same thing happened to Donald Rumsfeld under President George W. Bush after a mid-term defeat in 2006.

“Hagel was not considered a leading voice on a lot of international issues,” says Whitlock, highlighting other problems the White House felt with Hagel. “And there were some grumblings in the Pentagon that he was in a little over his head in managing this very large department.”

Disagreements and finger-pointing often follow these kind of personnel changes, says Whitlock. "I would say it’s not very strong in this case.”

“The complaint we’ve been hearing from the Pentagon from people close to Hagel, but also from the last two defense secretaries — Bob Gates and Leon Panetta — is that the White House liked to micro-manage the military; they liked to micro-manage the Defense Department," Whitlock says. "They were always questioning the nitty-gritty of troop movements and deployments and how they organized things. Gates and Panetta in particular have been pretty outspoken recently, saying they got really annoyed by getting calls from low-level White House staffers demanding an explanation for this or that. I think that was certainly the case with Hagel too. I don’t know if that’s why he left, but certainly he can point the finger back that the White House didn’t make it easy for him either.”