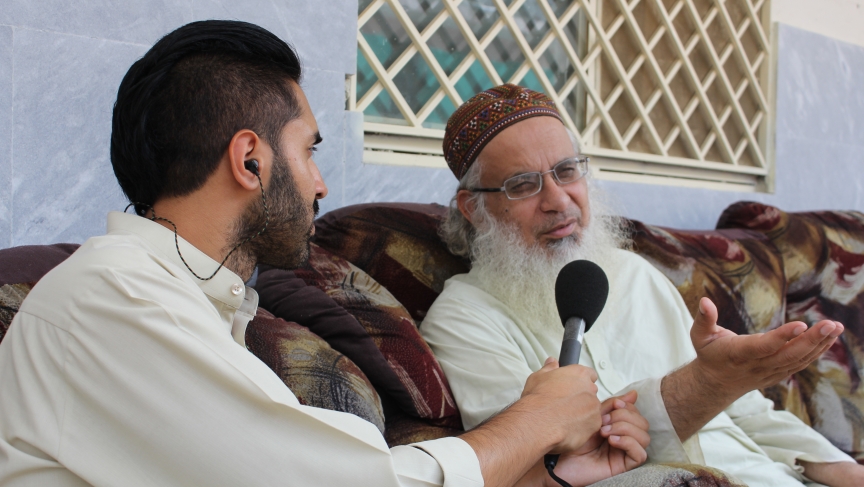 The BBC's Mobeen Azhar speaks to Imam Ghazi, leader of the Red Mosque

Across Pakistan, an increasingly radical brand of Islamic school or madrassa is gaining influence, spreading a purist form of Islam. And many of their students are going on to become imams and preachers across the country.

The BBC’s Mobeen Azhar spent time visiting one of the most famous and influential of these madrassas, the Jamia Hafsa in Islamabad. Students at the madrassa study for eight years in facilities where one of the libraries is named after Osama bin Laden. Male students who graduate are then qualified to preach at mosques across Pakistan.

Mobeen found that there was little attempt to moderate or hide the radicalism of the madrassa’s political and military agenda, which is hostile to both the Pakistani government and all ‘non-believers’ across the world. The school’s head Imam Ghazi told him it was the school’s aim to make students "passionate about fighting" in the cause of Jihad, even if they were not directly offered military training. Imam Ghazi’s views on the West are scarcely less radical.

According to Mobeen, he sees the attacks of 9/11 as an occasion to be "celebrated."

For Mobeen, the limited syllabus and worldview offered to students was particularly worrying. Most courses focus on Koranic studies and the Arabic language. So-called "worldly" subjects are also offered, but are used to reinforce a jihad-focused outlook.

"To be blunt, those lessons are really about how bad and how terrible the outside world is," Mobeen explained. "So its very introspective. I remember being in a classroom of students, and asked them to raise their hands if they regarded Osama bin Laden as a hero. There were 34 students, and every one of them raised their hand."

Although the Pakistani army and police are currently fighting a Taliban insurgency based on similar beliefs, there is great reluctance in Pakistani society to openly criticise these types of schools. The Jamia Hafsa is part of a larger "Red Mosque" complex, which formed the center of an armed uprising against the government in 2007. Dozens and possibly hundreds of madrassa students were killed in the fighting.

For Mobeen, the long-term risk is the influence that madrassas like Jamia Hafsa have on wider Pakistani society. "Many of the boys who go on to do the whole course will go on to be imams. And therefore community leaders. And that is quite dangerous scenario in my view. ... They will be preaching what they learned during an eight-year period at this seminary."

Mobeen Azhar's BBC documentary on radical madrassas in Pakistan can be heard on the BBC website.