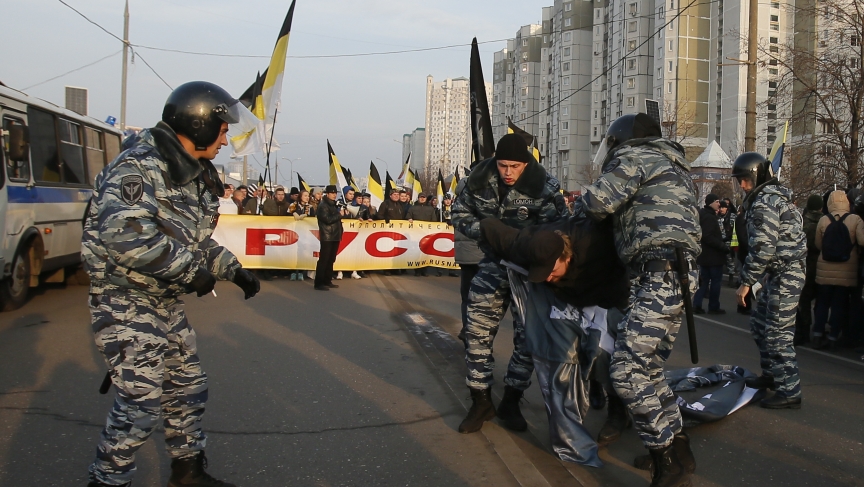 It turns out that the UN's Office on Drugs and Crime collects data on the size of police forces in many countries. And when it comes to sheer numbers, Russia beats everyone else. It has 565 police officers for every 100,000 Russians.

That number is about 100 more than the nearest competitors — Turkey and Italy. Portugal and Hong Kong are right behind those, with about 450 police officers per 100,000 people. You can check out the top ten rankings for yourself in the infographic created by the research firm Statista and published in the Independent.

Of course, some potential contenders didn't weigh in. Belarus was absent from the data and so was North Korea — perhaps the world's most oppresive "police state." The United States, by the way, has about 250 police officers per 100,000 residents.

The Loch Ness monster rears its head once again

After more than 18 months without so much as a peep from Nessie, suddenly the Loch Ness monster is all the rage. Over the centuries, there have been more than 1000 sightings, some dating back 1500 years. But fear not, swimmers and lakeside picnickers! The Woodland Trust has an explanation for the latest surge in sightings.

The Trust says that two rivers flow into Loch Ness and their flows often peak in late fall and in spring. They pick up dead limbs and logs as they pass through Urquhart Bay Wood and send those long, neck-like hunks of wood into the lake. Nessie believers are unconvinced.

The Scotsman spoke with Gary Campbell, who keeps track of "confirmed" Nessie sightings — as opposed to the unconfirmed kind, of course. Campbell isn't surprised by the new sightings of Nessie. He said the long run without sightings was the unusual thing and such a gap had not happened in nearly 90 years. "I’m convinced that Nessie has just taken some time out and will be back with a vengeance this year.”

This family is the target for Obama's immigration announcement

Thursday night, President Barack Obama announced he would defer deportations and grant work authorization for more than three million undocumented immigrants — making a total of five million undocumented immigrants who have been protected by his executive orders. PRI's The World met a family who meets the new criteria and is likely to win protection from the new policy.

The Manceras came to the US with the promise of a job and legal status. For whatever reason, Gabriel Mancera's employer never came through with the proper paperwork. The family chose not to leave and had a child in the country. Under Obama's executive order, their American child would help qualify the whole family to stay here legally. In addition to keeping the family together, the new order could help the parents find better-paying jobs.

This 100-year-old woman finally had her dream come true

Ruby Holt turns 101 this year. For her birthday, she only wanted one thing: to see the ocean.

Growing up in rural Tennessee, spending most of her time working on a farm or raising children, she never had a chance to make the 400-mile trip to the nearest ocean. But she'd heard so much about it.

So the retirement home where she lived reached out to the Wish of a Lifetime foundation. The AP reports that Holt received an all-expenses-paid trip to the Gulf of Mexico, as well as a custom, motorized scooter to carry her across the sand. She even got a chance to dip her toes in the water shortly before her birthday. What did she think? The ocean sure is cold.

Think you can trust those food labels? Think again.

Take the term "all-natural," for example. You might imagine that to mean something is straight out of the ground as "nature intended," or something like that. But, in fact, it can mean whatever the business making the product wants it to mean. In short, it's a marketing statement, not science, and it's not regulated by the government.

Americans are increasingly looking for foods that are healthy. But that search is far from easy. PRI's The Takeaway looks at a series of measures in the past year that have sought to bring some regulation and clarity to food labeling.

Hard to imagine a bigger insult for an American politician than being depicted as a hated symbol of tyranny. pic.twitter.com/TxkbBxCnky

The Philippines and other parts of the western Pacific region have their eyes on the skies — watching for another possible tropical outburst. According to AccuWeather, a line of storms could develop into a tropical cyclone, threatening the island chain by the middle of next week. Flooding, mudslides and damaging winds appear to be the greatest risks, even if the storms remain disorganized as they move through the country.