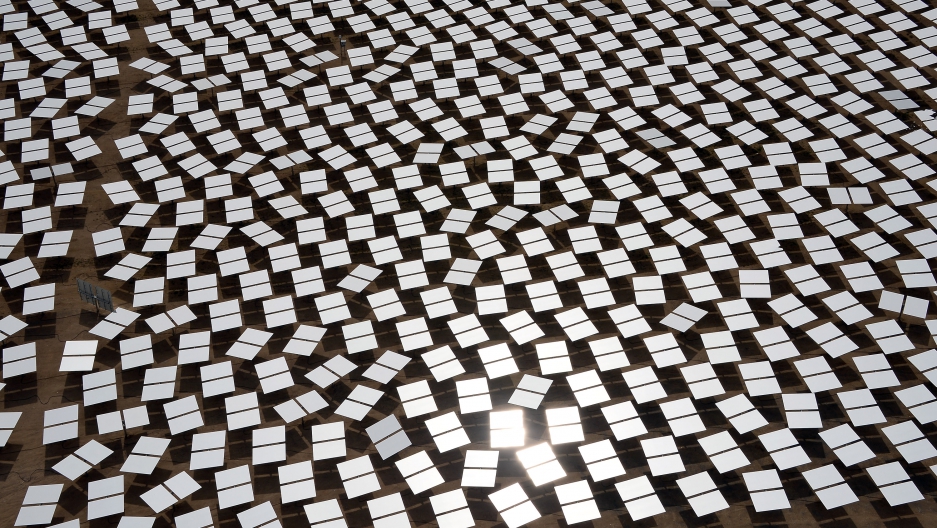 Heliostats at the Ivanpah Solar Electric Generating System are seen from above on March 3, 2014 in the Mojave Desert in California near Primm, Nevada.
Credit: Ethan Miller
Share

Editor's note: This essay is the fifth in a series, “Conservation Innovation: Voices of a New Generation,” which has been produced by the Lincoln Institute of Land Policy in collaboration with The GroundTruth Project on GlobalPost. The essays were written for presentation in Sydney, Australia during the November 2014 World Parks Congress organized by the International Union for the Conservation of Nature.

STANFORD, California — The framework for mitigation of environmental impacts in the United States is in pressing need of a new approach.

Currently, mitigation measures (measures required by regulation to moderate or alleviate environmental impacts) are an afterthought in the permitting process, being considered in a late, limited and fragmented manner – or not at all. A new, comprehensive framework based on investments in landscape-scale initiatives with tangible environmental benefits is both environmentally and administratively preferable to time-consuming efforts associated with the development of “one-off” mitigation projects.

Consider this example. In the Mojave Desert in the southwest United States, increasing numbers of solar power plants are being proposed for construction in response to rapidly growing demand for sources of renewable energy. Environmental regulations call for the mitigation of any impacts that such plants might make to the habitat and populations of wildlife such as the desert tortoise.

Over the past several decades, mitigation efforts undertaken in association with the construction of similar energy infrastructure facilities were scattered across the landscape. These scattered efforts generally provided modest, localized benefits, leaving very much in question the long-term viability across the vast desert landscape of wildlife populations, including that of the desert tortoise.

Environmental mitigation is the process of addressing impacts to the environment caused by human action — notably those resulting of highway, energy, water, and other infrastructure projects — and follows a hierarchy. First, negative environmental impacts should be avoided, for instance by re-siting the project to a more suitable location. If relocation is not feasible, science-strong measures should be deployed to minimize harms. Finally, if environmental impacts are inevitable, there should be appropriate compensation. This notion is conceptually sound, but has been unevenly implemented.

This is where landscape-level mitigation comes in: avoiding and minimizing environmental impacts is still a priority, but, when those need to be compensated, infrastructure project dollars will flow to larger, previously identified ecosystems where they can make a larger, longer-term difference.

The idea of landscape-level mitigation has been embraced by the White House. President Obama has directed the Steering Committee on Federal Infrastructure Permits to modernize the federal permitting process of infrastructure projects. I was a part of a policy lab group at Stanford Law School that worked to develop recommendations for the Steering Committee. Our policy lab group, working with David J. Hayes, former deputy secretary of the United States Department of the Interior, came to understand that, in practice, environmental compensatory mitigation actions required for infrastructure projects in some cases revolve around the types of environmental impacts for which specific regulatory requirements exist (in particular, impacts on wetlands under the Clean Water Act Section 404, and impacts on endangered species under Sections 7 and 10 of the Endangered Species Act).

With this in situation in mind, one of our policy lab group’s goals was to establish recommendations for a mitigation system that would address a wide variety of mitigation requirements under a single procedure. The goal was to improve outcomes for watershed health, species health, and habitat health while speeding up regulatory review times. By doing so, we could streamline the work of both developers and regulators.

This new, comprehensive approach would be based on advance planning that would identify, by means of programmatic studies, the best sites both for infrastructure projects and for corresponding mitigation activities. Use of these advance planning results would occur early in the process of permitting any specific development proposal. In addition to streamlining workflows, clearer siting rules would also send a clear signal to the market that the establishment of mitigation banks and other voluntary conservation mechanisms that conform to landscape-scale planning efforts would be welcome developments.

The recommendations of our policy lab group, as well as those of others interested in establishing landscape-scale mitigation procedures, have been presented for consideration by US Secretary of the Interior Sally Jewell, federal regulators at the US Fish and Wildlife Service (USFWS), the Bureau of Land Management (BLM), and other agencies, as well as project developers as they strive to improve permitting practice and efficiency.

Two examples illustrate the relevance of the landscape-scale approach to mitigation. The first is associated with attempts to protect the habitat of the greater sage grouse, a bird that needs large expanses of land to provide habitat for the various stages of its lifecycle. This is a topic of particular interest because of the ongoing USFWS formal status review of this ground-dwelling bird under the Endangered Species Act.

The prospect of a potential listing of the greater sage grouse as a threatened or endangered species in the 2015 fiscal year has attracted significant attention from the eleven Western states and by developers, such as oil and gas companies and wind energy companies, whose future infrastructure investments would be affected. A large, multi-agency group is working to inventory – at a landscape scale – the bird’s remaining habitat. The group’s goal is to identify important habitat strongholds for the species, some of which may be insufficiently protected and vulnerable to being lost. If more stringent regulations regarding greater sage grouse habitat come into play, plans to mitigate at the landscape scale may well become highly relevant and particularly useful in siting new energy facilities.

The second example takes us back to consider the fate of the desert tortoise. In a pilot effort, the BLM auctioned off to three development groups a total of six solar energy development sites in the Dry Lake Solar Energy Zone (SEZ) in Clark County, Nevada, about 15 miles northeast of Las Vegas. The solar sites auctioned off on June 24, 2014 cover a total of about 3,083 acres.

Importantly, the successful bidders were able to take into account per acre mitigation costs estimated by BLM, based on a March 17 Regional Mitigation Strategy for the Dry Lake Solar Energy Zone. The landscape-level strategy made the mitigation of impacts on desert tortoise habitat an integral part of the planning process.

Members of the conservation community and developer representatives appear to be pleased with the auction results. The Wilderness Society issued a press release reporting that “The auction is significant not only for this specific parcel’s clean energy potential, but because it indicates the tremendous progress our federal agencies have made over the past decade to find smart, responsible ways to develop clean energy on our public lands.” And in September 2014 First Solar filed with Nevada regulators for permission to proceed with plans to build a 200 megawatt solar facility at the site.

This programmatic approach could potentially set an example to be followed by fellow nations. Brazil, for instance, has an early assessment system that has been in place for many years: mitigation measures are determined at an initial stage of the permitting process - it is, however, subject to costly and time-consuming one-off analyses. Payments are generally channeled to governmental funds: as a result, developers have limited information with regard to the use of their resources, and, from a policy standpoint, relevant opportunities for engaging stakeholder participation are lost. Should Brazil adopt a programmatic planning model, mitigation needs and development siting could be matched, stakeholder participation could be increased, and overall more environmental benefits could be reaped.

Developing a workable framework based on investments in landscape-scale with tangible environmental benefits is both environmentally and administratively superior to the prevailing model of one-off mitigation projects. Such a holistic approach has the potential for, at one time, simplifying the permitting process and achieving better environmental results – a clear win for all stakeholders and for our landscapes.

Alessandra Lehmen is a Brazilian lawyer and policy advocate who received her LLM in Environmental Law and Policy from Stanford Law School in 2014. At Stanford, she was a 2014 Woods Institute Rising Environmental Leaders Fellow, the winner of the 2013-2014 Olaus and Adolph Murie Award for best written work in environmental law, and a member of the Board of the International Law Society. She also holds a JD, an LLM, and a Ph.D. degree in international law from Universidade Federal do Rio Grande do Sul and an MBA from Fundacao Getulio Vargas, Brazil.

Read Part One of the series: How to keep the American Southwest from drying up altogether

Read Part Three of the series: Why reversing deforestation is all about love

Read Part Four of the series: How green bonds can fund a conservation renaissance