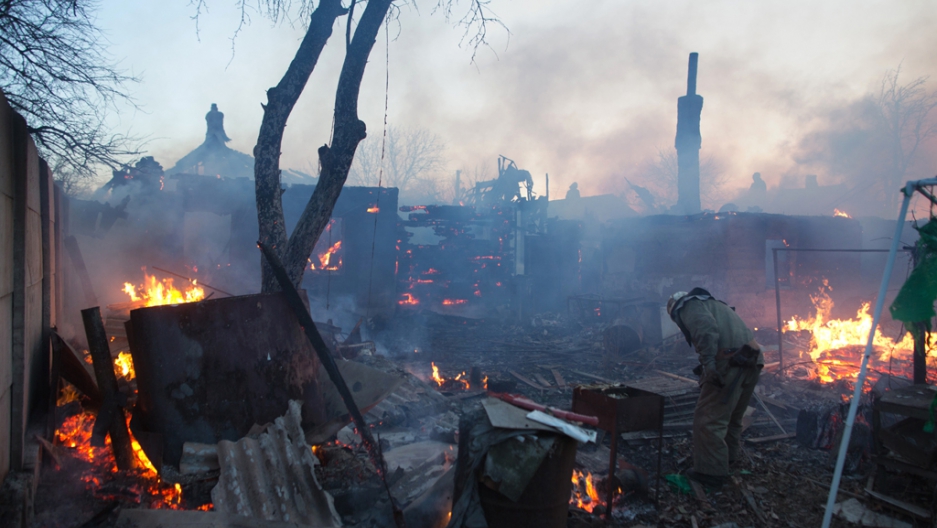 Firefighters tackle a blaze after shelling destroyed several houses in the district of Kuibishevskiy near the airport in the flashpoint eastern Ukrainian city of Donetsk on Nov. 20 2014.
Credit: MENAHEM KAHANA
Share

It's been a tough year for Ukraine. The country has been shaken to the core, with every sector taking a hit from the geopolitical quagmire it's been mired in for the past 12 months. Thrust into the spotlight last November following protests over its decision to forgo a trade deal with the European Union, Ukraine has been forced to face its national struggles on the global stage. In the course of a year, the country overhauled its leaders, lost Crimea to Russia and created the conditions for a second Cold War.

Throughout the revolution's tumultuous year, GlobalPost has reported from Ukraine's east, west and center — starting at Kyiv's Maidan, the movement's nucleus of protest. This timeline featuring our best reporting and analysis from correspondents and editors breaks down the sweeping changes the country has undergone in the past year.

The Ukrainian government bows out of a trade pact with the European Union, angering pro-EU opposition leaders who call for protests. GlobalPost senior correspondent Dan Peleschuk reports from Moscow:

Protesters in Ukraine are hoping to stage a nationwide campaign to denounce the government’s suspension on Thursday of plans to sign landmark agreements with the European Union, a move they say marks the abandonment of the country’s European aspirations. Calls to protest from opposition leaders, civic activists and ordinary Ukrainians flooded social networks on Friday, a day after the cabinet announced it would forgo sweeping political and trade agreements with the EU in favor of renewing relations with Russia, its Soviet-era ruler.

As anti-government protests continue to swell at the Maidan, Kyiv's central Independence Square, demonstrators topple a statue of Vladimir Lenin on Dec. 8, 2013. Peleschuk explains the significance of the moment:

Those who greeted the statue’s destruction say it represents a symbolic moment in a wave of demonstrations aimed at establishing Ukraine’s European identity and wresting the former Soviet republic once and for all from Moscow’s grasp.

A man tries to stop anti-government protesters from destroying a statue of Russian communist revolutionary leader Vladimir Lenin on Dec. 8, 2013 in Kyiv, Ukraine.

Ukrainian parliament passes a controversial anti-demonstration legislation on Jan. 16 and repeals it a few weeks later. The protests continue to rage on, and three people are killed in clashes between security forces and demonstrators.

Peleschuk sends in video from the epicenter of the clashes in Kyiv, which resembles a war zone:

Ukraine's parliament votes President Viktor Yanukovych out of office, and he flees Kyiv. His archrival, former Prime Minister Yulia Tymoshenko, is freed from prison. What does this mean for Russia?

The two managed to sign a natural gas deal in 2009 that looked set to finally begin setting Ukraine free from Russian influence exerted through its wrangling over gas prices.

After he eventually won the presidency in 2010, Yanukovych immediately set about undoing the deal by agreeing to new Russian subsidies in exchange for extending Moscow a long lease on the port of Sevastopol, where the Russian Black Sea Fleet is based.

But Putin is playing a long game. He’s shown in the past that he can lie low and rely on energy deals and propaganda to try to influence events. Surely that will continue in Ukraine, which will remain Russia’s southern neighbor, an important trading partner where many people speak the Russian language and have relatives and other close ties to the old Soviet master.

GlobalPost news editor Ambika Kandasamy talks to Christopher Miller, a former editor at Kyiv Post, about the violence on the ground and the radicalization of some protesters:

listen to ‘Radical protesters’ on Audioboo

Kyiv protesters hold a memorial for their comrades who were killed in clashes with Ukrainian forces.

Ukrainians get a glimpse of Yanukovych's decadence after protesters storm his deserted mansion. This short video produced by GlobalPost contributors Ben C. Solomon and Nadia Parfan shows the reaction of one babushka upon seeing his home.

"My heart can't take everything that's happened here," she says.

Crimea holds a referendum to decide whether it should join Russia, on March 6, 2014. Here's what one voter — a pensioner — tells Peleschuk:

I was born in Soviet Russia, in Crimea, but they handed me off to Ukraine like a sack of potatoes, along with my native land.

The US and EU enact sanctions against Russia — GlobalPost's Jason Overdorf gives the details:

The European Union and United States have enacted visa bans and asset freezes against a number of Russian and Ukrainian officials after Crimea applied to join Russia on Monday.

The US and EU say the referendum as well as Russia’s military invasion of Crimea are illegal.

Another phrase used by reporters in Russia and Ukraine alike is "little green men," which refers both to the colour of their uniforms and their unconfirmed origin. Their involvement in Crimea is a "tragicomic masquerade," says Russian liberal newspaper Novaya Gazeta, which argues that "the little green men will turn into Russian troops very soon."

Eastern Ukraine is thrown into tumult as separatists seize government buildings in Donetsk, Luhansk and Kharkiv. Mass pro-Ukraine rallies are held in Donetsk:

Yet fears of the new regime in Kyiv persist in eastern Ukraine, as this video by GlobalPost contributor Greg Brosnan reveals:

Many on Europe's radical right admire Putin's strongman image. Nigel Farage, leader of the United Kingdom Independence Party, last week said Putin was the world leader he most admired. "Compared with the kids who run foreign policy in this country, I've more respect for him than our lot."

Russian media have widely reported his comment that the EU has "blood on its hands" by meddling in Ukraine.

Chocolate tycoon Petro Poroshenko is elected as Ukraine's president. Peleschuk describes the hurdles that are in store for him:

Before Petro Poroshenko, who won Ukraine’s presidency in the election on Sunday, had even detailed his priorities in a post-election press conference Monday, he was slapped with a fresh raft of reminders of just how tough his job will be.

By dawn, armed pro-Russian rebels had seized the central airport in Donetsk, the regional capital of the industrialized eastern heartland and the hotbed of Ukraine’s separatist movement. Flights were suspended , and clashes with pro-government forces erupted shortly after.

Poroshenko signs a free-trade agreement with the EU in Brussels, promptly drawing the wrath of Russia. Reuters reports:

Poroshenko announces a ceasefire with separatists in eastern Ukraine which lasts less than two weeks.

Men search the wreckage of a commercial passenger plane that was shot by a missile on July 18, 2014 in Grabovka, Ukraine.

Once buzzing with activity, this sleepy compound in the rolling hills of eastern Ukraine emptied quickly on Thursday as the last of a team of international experts left, their mission to identify the remains of Malaysia Airlines Flight 17 indefinitely suspended.

The development comes as fighting between Ukrainian government forces and separatist rebels rages on despite pledges from both sides not to interfere with the work of identifying the remains of around 80 bodies still believed to be scattered throughout the sprawling site.

Ukraine's Western allies had likewise warned Moscow against unilaterally deploying the caravan of white tractor-trailers, suggesting the move was aimed at resupplying rebels and thereby infringed on Ukraine’s territorial integrity.

But Saturday’s delivery to the besieged city of Luhansk — currently in the throws of what Moscow has cast as a "humanitarian crisis" amid heavy shelling — seemingly ended as quickly as it began, without any of the provocations critics feared would serve as a pretext for Russian military involvement.

Another ceasefire between Ukraine and separatists goes into effect. The BBC takes a comprehensive look at the 12-point ceasefire.

And NATO gives a stern warning to Putin. Ames has the story:

On paper, at least, NATO's conventional forces still outgun Russia's despite Putin's massive investment in defense in recent years and the steady decline in military spending by European members of NATO since the end of the Cold War. ... However, NATO’s weakness lies less in the number and quality of forces at its disposal than on whether its member nations have the political will to use them. Many allies will be hoping against hope that Friday's ceasefire could mark the start of a genuine de-escalation that ensure their will won't be put to the test.

Ukraine, Russia and the European Union signed a deal on Thursday that will see Moscow resume vital supplies of gas to its ex-Soviet neighbor over the winter in return for payments funded in part by Kyiv's Western creditors.

After several failed rounds of talks in recent weeks as conflict rumbles on despite a ceasefire with pro-Russian rebels in eastern Ukraine, the accord also eases concerns that a new "gas war" could disrupt winter supplies if energy to EU states, notably through pipelines shut down across Ukraine since June.

Another truce between Ukraine and separatists fails. The UN says at least 1,000 people were killed during the ceasefire.

Peleschuk writes that Ukrainian "officials and ordinary people are still figuring out how to patch together a traumatized and divided society."

There's a war with Moscow-backed separatists in the east, a tanking economy and a hugely corrupt state bureaucracy desperately in need of reform. There's also Vladimir Lenin, whose toppling in Kyiv became an early symbol of the protests against the ousted pro-Moscow President Viktor Yanukovych. Lenin's legacy — or rather, how it's being handled — has become a barometer for how quickly Ukraine can heal its post-revolutionary wounds. "On one hand, it’s a symbol of separating from the totalitarian past," says Volodymyr Paniotto, a leading sociologist in Kyiv. "But on the other, it’s a characteristic of a radicalized society using uncivilized methods instead of civilized ones."

Ukraine continues to fight its other battle: Helping its thousands of displaced citizens.

Ukraine and separatists in the east have agreed to a ceasefire in the Luhansk region which will go into effect on Friday, Dec. 5, Reuters reports:

The deal reported by the Organization for Security and Co-operation in Europe is the latest attempt to reinforce a much violated ceasefire agreed on Sept. 5.

Shelling from both sides has continued despite the three-month-old ceasefire deal signed by Ukraine, Russia and the pro-Russian separatists' leaders. Subsequent attempts to forge a stronger truce have failed to halt the artillery fire.

The OSCE said representatives from both sides had "agreed in principle to a total ceasefire along the entire line of contact" in the Luhansk region, but that differences remained on certain details.