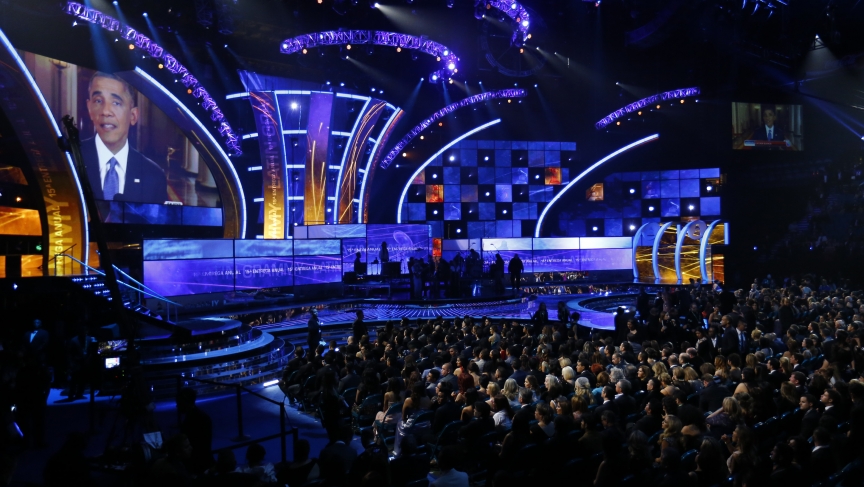 President Barack Obama is shown on a large screen as he delivers his immigration speech from the White House before the start of the 15th Annual Latin Grammy Awards in Las Vegas on November 20, 2014.

President Barack Obama was in Washington on Thursday night, but he became the star of the Latin Grammy Awards being held at the same time in Las Vegas.

The awards show was delayed by 17 minutes so President Barack Obama’s announcement on immigration could be carried live with Spanish translation on Univision, and his decision to defer deportations and grant work authorization to five million undocumented immigrants was celebrated during the rest of the evening.

“After the announcement, it was all anyone could talk about,” says Billboard magazine’s Leila Cobo. “It was kind of astonishing that this was the topic of the night. For example, Carlos Vives dedicated his Grammy to Obama … it was amazing considering he’s not even American, he’s Colombian.”

When Enrique Iglesias accepted the Grammy for Song of the Year, he mentioned the president’s actions in his acceptance speech.

"Good evening. We’re here in France, in Paris, and we want to send you a very big hug," Iglesias said in a video message. "We wish we could be there with all of you celebrating. This night is not only historic for all the Latino artists, but for all the Latino people who live in the US. A big hug. Thank you."

Cobo says the issue is close to the hearts of performers because it’s so important to their fan base. “I think [the musicians] are very, very plugged in, because I think everybody is in some way connected to somebody who is in this situation," she says. "A lot of Latin music-buying fans are illegal and they interact with the artists ... and to have these people be able to live legal lives helps everybody.”

Cobo says her favorite performance of the night was the collaboration between Canadian reggae fusion group Magic! and Latin pop legend Marc Anthony. Together they sang a Spanglish version of Magic!’s hit song, “Rude."