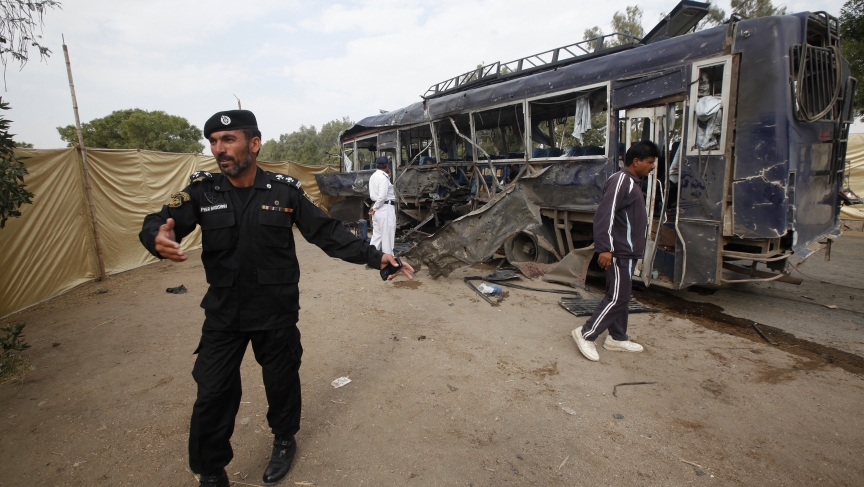 A security official prevents members of the media from approaching a damaged police bus at the site of an explosion in Karachi targeting policemen on February 13, 2014.

Local police in Karachi, the commercial capital of Pakistan, now report the Taliban have taken control of the city's organized crime.

Azhar spent time with a Karachi police unit deployed to raid Taliban suspects. He found a force facing heavy loses from Taliban attacks — an average of one officer a day is killed fighting the Taliban in the city — and with only minimal control of some areas of the city.

Even making an arrest can involve severe risks. Mobeen attended one night raid in a Taliban-controlled district of the city, where an organizer of suicide bombings was believed to live. More than 25 armed police officers were involved in the raid, but they couldn't risk staying in the area more than a few moments after the arrest. All the officers wore face masks to avoid reprisals against them and their families.

For their part, the Taliban see themselves as part of a wider struggle to institute a "true" Islamic government in Pakistan. Mobeen interviewed one Taliban member held in custody. In spite of being shackled and blindfolded in an institution notorious for torture, the man goaded his captors.

That war isn't without horrors on both sides, either: The police are themselves accused of torture and summary executions.

In the long run, the Pakistani state’s ability to win the fight may depend on its legal system. Between September 2013 and September 2014, there was not a single successful conviction in Pakistan for terrorism-related offenses. That will have to change before real progress is possible.