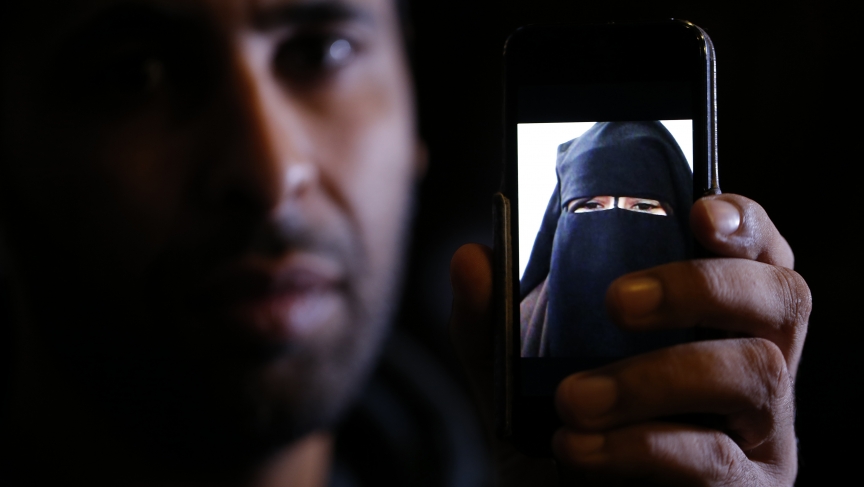 Foad, the brother of 15-year-old Nora, who left her home in Avignon for Syria nine months ago, shows a portrait he took last September, during an interview on October 6, 2014.

France has been shocked by the suggestion that two of the killers identified in the latest beheading video from ISIS are French.

“People are very disturbed by it for obvious reasons,” says Christopher Dickey, the Paris-based foreign editor of The Daily Beast, "but also because these are not Muslim immigrants or the descendants of Muslim immigrants: These are people who have converted to Islam.”

French officials say more than half of the French citizens associated with ISIS are converts who "grew up in conventional French households in Normandy or Paris or wherever," Dickey says. "That really is disturbing for people because it means, basically, your next door neighbor, or your next door neighbor’s son, whom you never suspected, could turn into a jihadist.”

Dickey says these converts embrace their own idea of Islam and cherry-pick bits of the Koran and the hadith, the traditions associated with Muhammad: “It’s as if you went to the Old Testament and took every bloody passage you could find and say, 'This is the lesson for us about how to lead our lives and how to relate to other people.' That’s what happens with these guys.”

French authorities believe 1,100 to 1,200 French citizens are involved with jihadist networks abroad. Of those, they believe 376 are currently with ISIS in Syria or Iraq, including 88 women and 10 children. Some have returned and others have, in their words, been "neutralized."

The women do not go as fighters, but rather supporters of the cause, often marrying jihadi fighters. “For some reason this is a seductive idea for some young women in Europe," Dickey says.

He explains that the women are given as a kind of prize to proven warriors. Other women are captured from minority sects like the Yazidis and forced into sex slavery for jihadi men. "There’s a video of some of these young guys sitting around talking about how they’re going to divide up the slave women they’ve acquired," Dickey says. “It’s very medieval, and it’s very ugly.”

The French authorities say they work hard to stop potential jihadis from leaving the country, and prosecute those who return. But Dickey points out that one of the men in the video brags how he flaunted his identity while traveling to Syria, “wearing combat boots and full beard at the airport, looking exactly like a jihadi, and nobody bothered him for a second.”

But the French are not unduly concerned. There were extensive waves of Islamist terrorist attacks in Paris and elsewhere in France in the 1980s and again in the 1990s.

“The French, while they’re certainly not cynical and passive about this, they know they can live through these kinds of incidents," Dickey says. "And it only increases their determination to crack down on these guys.”