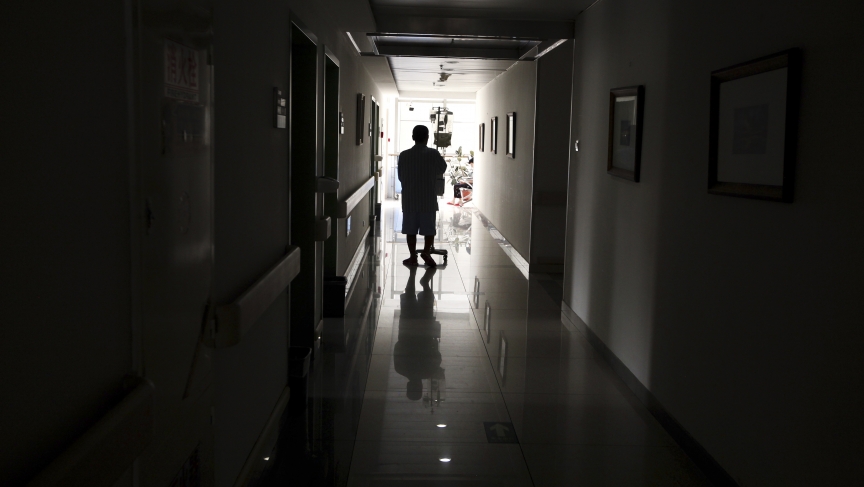 A cancer patient pushes his drip stand as he walks down a hallway.

On November 1, when 29-year-old Brittany Maynard chose to end her own life under Oregon’s Death With Dignity Act, she reignited an emotional debate that had been simmering quietly in the US for a while: Does someone who is terminally ill and facing months of pain and suffering have the right to decide enough is enough?

In five states in the US, people have this right, under certain circumstance. Oregon is one of them. Brittany Maynard relocated from California to Oregon earlier this year specifically because she wanted to be able to decide for herself when her illness had taken enough of her life away — to die with dignity.

(Editor's note: This is part of a full series on death and dying produced by To The Best of our Knowledge. Several pieces will be featured here on PRI.org in the coming weeks — but you can see all of it at TTBOOK.org)

Maynard’s case is especially riveting because she was only 29 and so publicly passionate and articulate about her choice. But more commonly, people who seek physician-assisted death are older and their choice does not generate national headlines. This was the case of 75-year-old Ben Wald.

Wald was faced with lung and bone cancer that had left him nearly unable to speak and in excruciating pain. He, too, decided to end his own life in a quiet, dignified way that would spare his loved ones the worst of his suffering.

In 2005, Ben had been diagnosed with colon cancer. After a successful surgery, he and his wife Pam thought they had come through it. Then, in 2011, the cancer recurred. It had already metastasized to his lungs. It was now considered Stage Four lung cancer.

“We were really shocked,” says Pam Wald, Ben’s wife, “because we thought he just had a cough — and when we went in and had X-rays, they originally thought it was just pneumonia.”

When they got the new diagnosis, Pam says, they faced it as they did most things: “We're both kind of idealistic, optimistic people and so we just said, ‘All right, let’s just see what we can do to fight this — and so that's what we began doing.’”

But eventually the doctors told them there was no treatment that would stop the progression of the cancer. There was a 10 percent chance that chemotherapy could extend Ben’s life a couple of months, but there would be side effects. Together, Pam says, the Walds elected not to do this.

By March of 2012, Ben’s weight had dropped from 170 pounds to 120 pounds and the cancer had now spread to his bones. “He lost his voice. He could just whisper,” Pam says. “He was in incredible pain; he could not get comfortable at all. He had no appetite, no energy.”

One night he woke Pam up in the middle of the night. “I was married to a very, very honest man,” Pam says. “He said, ‘Pam, we just need to talk. I look in the mirror and I see someone from Auschwitz. I love you and Bonnie [their daughter] dearly, and our friends. But I just don't want to keep living like this.’” He told her he wanted to explore Oregon's Death with Dignity law.

“Because I love this man and had been with him for 43 years, I just stepped up to the plate and said, ‘Okay, I'll do whatever I can to help you,’” Pam says.

Like Maynard, Ben and Pam reached out to the nonprofit group Compassion & Choices to help facilitate his death. Qualifying for Oregon’s Death With Dignity Act is not a simple process; Pam says she was grateful for the volunteers who helped her navigate the complicated criteria written into the statute, so she could focus on caring for her husband.

Under Oregon’s law, two physicians must agree that the case is terminal and that the patient has less than six months to live. The patient must make two requests for the medication, separated by at least 15 days — and both doctors must agree the patient is lucid enough to make his own choice.

“They had to ask him the question,” Pam explains. “They can’t ask a loved one. A person must be able to speak for himself in order to qualify for the law.” Both doctors confirmed that Ben qualified and one of them, Dr. David Grube, a family physician for 40 years, wrote out the prescription for the medication that would end Ben’s life.

“Ben was laying on the couch in the living room and I said, ‘Honey, we got permission.’ I could just see the peace,” Pam says. “He just became so relaxed. He was still in pain, but I could see a relaxed feeling in him. It was like, ‘Oh, I have my choice.’ And I could see that I was giving him a gift of love by helping him with this.”

On a Wednesday, friends picked up the prescription for the Walds and came to their house for dinner. That evening, Ben told Pam he wanted to take the medication in two days — on Friday, May 4.

There is another condition of the law that may have hastened Ben’s decision: the medication must be self-administered. No one is allowed to help the patient take the medication.

“The medication is very, very bitter, so Jane [a volunteer from Compassion & Care] mixed the medication with applesauce in a little white teacup with a spoon,” Pam explains. “She gave that to me. Ben was sitting on the edge of the bed and I gave that to him. And then he just ate it all real fast.”

She wished she had been allowed to help him, but she knew the law. “I can’t help him. He has to take it himself. If someone cannot hold the cup, because of physical disabilities, like ALS or Parkinson's — if they can't hold it, then by law they cannot utilize the Death With Dignity Law,” she explains.

Fortunately, she says, Ben did not need help eating at that point in his illness. Pam says he lay back on the bed very peacefully. He died two hours later.

Pam says the last words he spoke were, “Thank you.”

This story is based on an interview from To the Best of Our Knowledge, an audio magazine of ideas that's two hours of smart, entertaining radio for people with curious minds.