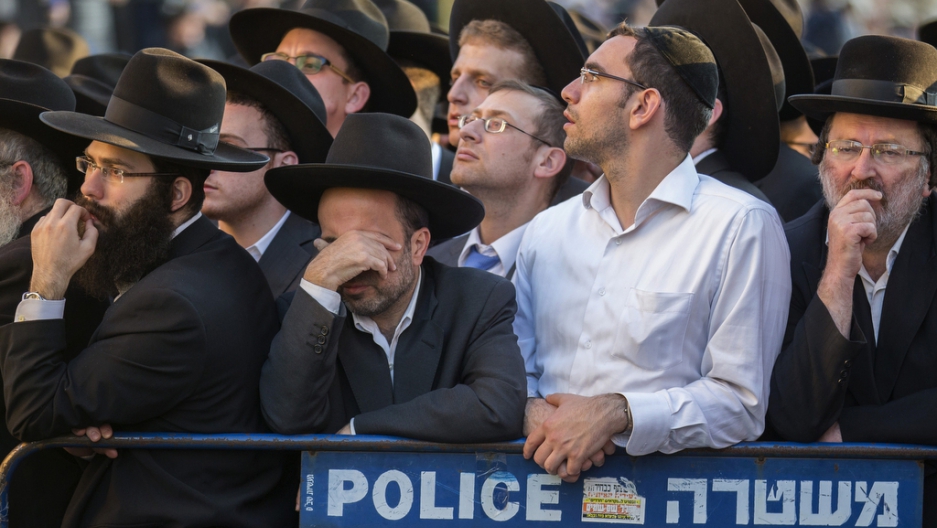 Ultra-Orthodox Jews mourn over the bodies of three of the victims of an attack by two Palestinians on Jewish worshippers at a synagogue in Jerusalem on Nov. 18, 2014.
Share

Tuesday's frenzied attack on Jewish worshippers at a synagogue in Jerusalem, in which Palestinians shot and hacked four rabbis to death, is shocking even for this part of the world.

Two Palestinian men used meat cleavers and a gun to carry out the gruesome attack, which also left eight people wounded. The assailants were later shot dead by police. An officer who responded to the attack died of his injuries late Tuesday night.

More from GlobalPost:  What people in Jerusalem right now are saying about the violence

As horrifying as this incident is, it's just the latest in a series of deadly attacks and violent clashes between Israelis and Palestinians over the past five months.

To put this latest attack in context, we've pulled together this timeline of the major incidents since June:

An Egyptian-brokered ceasefire agreement that went into effect on Aug. 27 ended the fighting, but has failed to restore peace to the troubled region, with Palestinian and Israeli leaders accusing each other of fueling the latest outbreak of deadly violence.

Long-simmering tensions between the two sides boiled over this summer following the kidnapping and murder of three Israeli teenagers in the West Bank, which sparked a seven-week war between Israeli forces and Hamas militants in the Gaza Strip. More than 2,200 people were killed in the conflict, most of them Palestinians.

July 2 – A Palestinian teenager is abducted in East Jerusalem and burned to death in an apparent revenge killing for the murder of the three Israeli youths.

July 8 – Israel launches “Operation Protective Edge,” sparking a seven-week war with Hamas militants in the Gaza Strip. More than 2,200 people were killed in the conflict, according to UN figures, most of them Palestinians.

Aug. 27 – An open-ended ceasefire between Israel and Hamas is announced.

Sept-Oct – Palestinians stage frequent protests in Palestinian neighborhoods of Jerusalem, fueled by tensions over access to the holy site known to Jews as Temple Mount and to Muslims as al-Haram al-Sharif, or Noble Sanctuary.

Oct. 19 – An Israeli settler runs over and kills a 5-year-old Palestinian girl in the West Bank.

Oct. 22 – A Palestinian driver rams his vehicle into a crowd of commuters waiting for a train in Jerusalem, killing a baby and injuring several others.

Oct. 24 – Israeli forces shoot and kill a 14-year-old Palestinian-American boy during clashes in the West Bank.

Nov. 5 – A Hamas militant driving a minivan kills one person and injures more than a dozen others after ploughing his vehicle into pedestrians in Jerusalem. Israeli police shoot dead the driver.

Nov. 10 – Two separate knife attacks by Palestinians leave an Israeli woman and a soldier dead in Tel Aviv and the West Bank.

Nov. 12 – Israeli authorities grant initial approval for the construction of 200 homes on disputed territory in Jerusalem.

Nov. 13 – Netanyahu holds talks with US Secretary of State John Kerry and Jordan’s King Abdullah II to ease tensions between Israelis and Palestinians.

Nov. 16 – An Israeli man is stabbed in the back with a screwdriver near central Jerusalem.

Nov. 17 – Palestinian bus driver Yousuf al-Ramouni is found hanged in his bus near Jerusalem. Police say it was suicide, but Palestinians claim he was the victim of foul play.

Nov. 18 – Five Israelis are killed in an attack at a synagogue in Jerusalem. The Popular Front for the Liberation of Palestine praised the attack in a statement and said the two men responsible were its members. The statement stopped short of claiming responsibility, but Hani Thawbta, a PFLP leader in Gaza, told Reuters: “We declare full responsibility of the PFLP for the execution of this heroic operation conducted by our heroes this morning in Jerusalem."