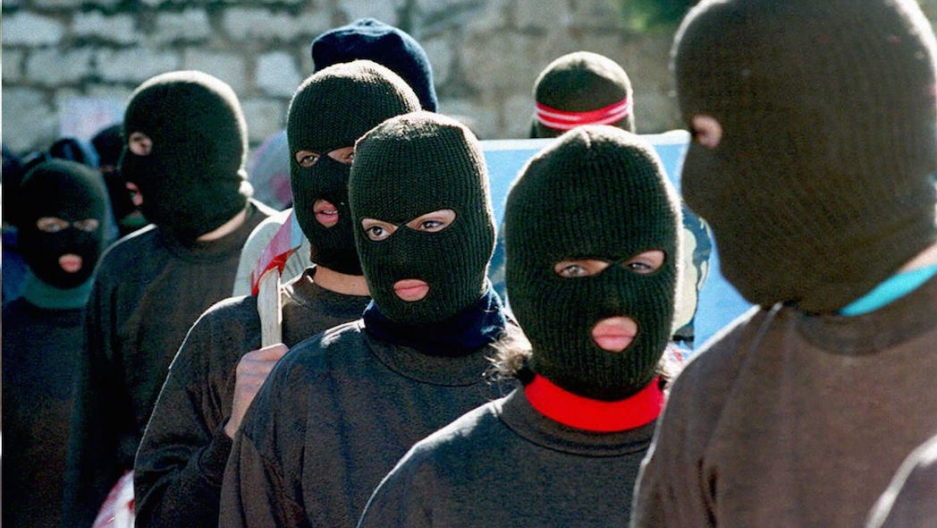 Masked members of the Popular Front for the Liberation of Palestine (PFLP) gather at the Bethlehem University December 8, 1994, for a rally commemorating the seventh anniversary of the start of the Intifada and to protest the Israel-PLO peace accord.
Credit: AWAD AWAD
Share

CAIRO, Egypt — Five Israelis were killed on Tuesday in the worst attack to take place in Jerusalem in years. Two Palestinian men, cousins identified as Ghassan and Odai Abu Jamal, attacked worshippers in a synagogue with knives and a gun before being shot themselves.

The assailants were members of the Popular Front for the Liberation of Palestine (PFLP), a leftist group whose militant wing, the Abu Ali Mustafa Brigades, issued a statement in the aftermath of the attack calling it a “heroic operation” and describing the perpetrators as “martyrs.”

The statement stopped short of claiming responsibility for the attack, but Hani Thawbta, a PFLP leader in Gaza, told reporters on Tuesday: "We declare full responsibility of the PFLP for the execution of this heroic operation conducted by our heroes this morning in Jerusalem."

Regardless, the attackers' affiliation with the group is not contested. So, who makes up the PFLP, and what does the group stand for?

Founded by a Christian

While today much of the world associates Palestinian resistance with the Islamist group Hamas, this wasn't always the case. In the early days of the occupation, secular groups tended to hold sway. The PFLP was one of them. Founded by a Palestinian Christian, George Habash, in 1967, the group espouses a blend of Marxist-Leninist principles, coupled with Arab nationalism.

Islamist groups gained ground later in part as a result of the Israeli government allowing them to flourish in order to counter the influence of more powerful secular groups.

Over the past few decades the PFLP has fought for a one-state solution to the Israeli-Palestinian conflict and has historically been skeptical of peace process negotiations.

The group changed its position in 2000 to back a two-state solution, with Jerusalem as the capital of a Palestinian state. Then in 2010, it reverted to its original stance of calling for a one-state solution and arguing against peace talks with Israel.

The US, the EU and Canada have declared it a terrorist organization.

Friends around the world

Japanese terrorist Kozo Okamoto, a member of the Japanese Red Army guerrilla group, with Palestinian former jail mates after being freed in a prisoner swap between the PFLP and Israel.

As its name suggests, the PFLP is concerned primarily with the liberation of Palestine. But its Marxist politics have meant it made friends with a wide variety of militant groups from across the world over the years. One of those was the left-wing German Baader Meinhof organization.

Historically it has had good relations with the former Soviet Union and China, and at different points with Syria, Yemen and Iraq. Its relationship with Iran has ebbed and flowed depending on regional politics.

The group also had ties to the communist militant organization the Japanese Red Army, and carried out several violent operations with them.

Mural of Leila Khaled on the Apartheid Wall at Bethlehem on June 16, 2013 in central West Bank.

The PFLP became known in the '60s and '70s for pioneering plane hijackings to garner attention for their cause.

One of the group’s most famous members was the female hijacker Leila Khaled. She participated in a number of hijackings, including of a TWA flight from Rome to Athens in 1969, which saw the group take two Israeli hostages. They were later released in exchange for Syrian and Egyptian soldiers held by Israel.

Khaled had cosmetic surgery operations on her nose and chin to change her appearance so that she could take part in her second hijacking the following year. An iconic photograph of her in 1969 helped make her an international symbol of Palestinian liberation.

The PFLP would regularly attack civilian targets in and outside of Israel. In one of their worst attacks — in cooperation with Japanese Red Army guerillas — they murdered two dozen passengers at Israel’s international airport in Lod in 1972.

They carried out further attacks in Munich, Brussels and Greece.

Masked Palestinian militants of the PFLP hold up their rifles and flash the sign of victory on Sept. 2, 2014. The rally in Gaza City celebrated the Egypt-mediated ceasefire between Israel and Hamas.

The PFLP is not what it once was. The decline of the Soviet Union in the 1980s meant the loss of its most powerful backer. The rise of Islamist groups such as Hamas, as well as a leadership that was seen as old and out of touch, saw much of its support ebb away.

Many of the group’s leaders have either been locked up or assassinated by Israel. One of those killed was Abu Ali Mustafa, who replaced Habash as leader in 2000. In retaliation, the PFLP shot and killed the Israeli Tourism Minister Rehavam Zeevi. The PFLP’s current leader, Ahmed Saadat, is in an Israeli prison.

In recent years, the group has continued to engage in armed resistance, firing rockets from Gaza and attacking Israeli troops patrolling the border.