Women wearing "No Walmart" head bands at a protest outside Walmart India offices in Gurgaon, India

Shambhu, the young man who sells vegetables from a cart near my home, is probably my neighborhood’s most popular person. Most residents, especially older ones, have his cell phone number and often order their produce by phone. For the rest, mornings usually begin with a stop at Shambhu’s cart.

That's the way it is in most neighborhoods in Delhi. Each area has at least one vegetable vendor; the same goes for fruit vendors, too, although there are usually a few more of them walking through neighborhoods with their carts.

Some 80 percent of the Indian economy is in the informal sector, and street vendors and hawkers are part of it.  They’re still an integral part of life in India, and not just when it comes to vegetables and fruits. Even in a city like Delhi that's home to big malls, smaller places like the Sarojini Nagar market are packed every day of the week with people buying clothes, shoes, jewelry, household goods and anything else — all from hawkers and street vendors.

I’ve marveled at how important these vendors are to people’s lives, but I've also come to recognize the sad reality that many of these vendors and hawkers struggle to make a living. That became even more clear when I covered a protest by the National Hawker Federation at Walmart’s India headquarters in the neighboring city of Gurgaon.

When I arrived at mid-day, there were a couple hundred protesters on the side of a busy and dusty road. On either side were tall, futuristic looking buildings, all representing the new, rapidly developing India.They seemed to represent the older India, still poor and part of its old economic ways.

Some protestors wore black head bands with the sign: No Walmart. But they weren’t there to ask Walmart to leave: They simply wanted the company to make sure its stores are not built near areas with many vendors and hawkers — at least 3 km, or about 1.8 miles, away.

None of them had had any experience with Walmart, but most protesters said their businesses suffered because more people are shopping at supermarkets and malls.

“All malls affect street vendors,” says Geetanjali Arora of the National Hawker Federation, who helped organize this protest. “All the fruit and vegetables that vendors sell, now malls are selling them too. People go there, buy all they need for a week and they come home. So, obviously this affects how much street vendors can earn.”

But now, after the construction of malls in his neighborhood? "I hardly have a customer," Sahni says.

From what I can see around me, the trend is obvious. When I was growing up, there were no malls or supermarkets in India; now both are everywhere. Vendors are still a big part of the culture here, but shopping at malls and supermarkets has become the cool thing to do. And as neighborhoods develop, governments sometimes try to “clean up" by evicting vendors and hawkers. 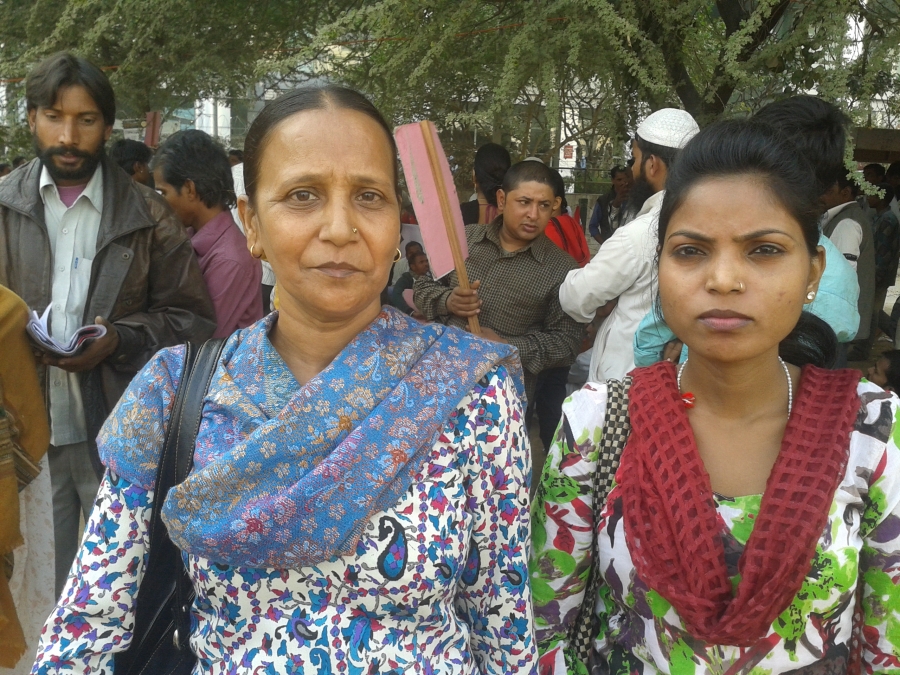 Sudha, a 42 year-old widow (left) has been selling purses at a market in West Delhi. Lately, she says her business has suffered as more and more people are choosing to shop at bigger stores in malls.

The protest seemed less about Walmart and more about the larger conflicts between India's haves and have-nots; between wanting to have a better standard of living and having to barely scrape by.

Sahni says he wants his kids to grow up and get jobs so they don’t have to be poor. But he’s not hopeful about it.

His younger son, who’s in seventh grade, has been nagging him about a private tutor because the public school he goes to isn’t that good. “But a private tutor costs 1,000 [rupees] a month,” he says. “How will I pay for that? I just can’t afford it!”