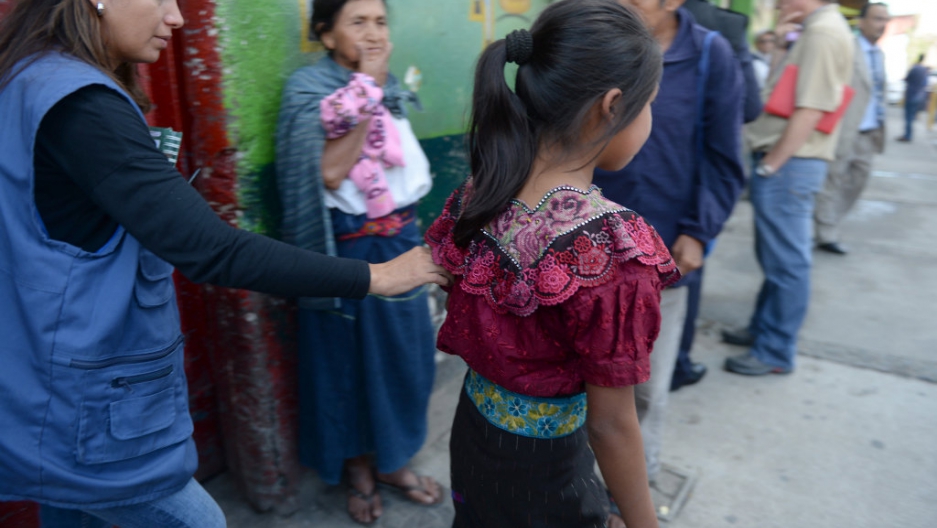 A girl (R) is taken away by an Attorney General's office staffer after having been rescued from a house where she was held captive by a network of human traffickers and labour exploitation, in Guatemala City, on Sept. 10, 2014. The Defense Advanced Research Projects Agency (DARPA) is currently working on technology that could help stop millions of men, women and children from being abused, exploited and sold into slavery.
Credit: JOHAN ORDONEZ
Share

LONDON — It’s estimated that somewhere between 14,000 and 17,000 people are trafficked annually in the United States, and millions of people around the world are victims of the global exchange of humans for money.

Sex trafficking is a massive problem that has been a key focus of the Thomson Reuters Foundation and numerous other groups for years. A massive community of NGOs, law enforcement agencies, media and policymakers around the world have been combating the scourge of sex slavery for years, but the practice has continued unabated.

However, help often comes from the most unlikely places. At DARPA (the Defense Advanced Research Projects Agency), an American agency mostly associated with wartime experiments like robots and mind control, Dr. Christopher White and a team of creative technologists are using digital tools to curate data from across the public web to combat sex trafficking and give law enforcement a leg up on catching perpetrators.

While these days “big data” is often considered a dirty phrase associated with evil marketers and Facebook’s privacy policy, it’s important to remember just how much information is out there – and that studying it can do a lot of good. Memex, DARPA’s program for aggregating and crunching those numbers, is a notable part of President Obama’s Big Data Initiative [PDF] and one example of how the power of data can be leveraged in a positive way.

Dr. White sat down with the RIGHTS blog after his speech at Wednesday’s Trust Women Conference in London and blew the audience away.

AP: Your team can look at a cluster of online sex advertisements that share information in common, such as vernacular, photos, text, locations and phone numbers. You mentioned that there were 373,000 online ads for sex in New York in a year, and 119,000 in London. Globally, what’s the number you’re looking at?

CW: It depends on how you prioritize the discovery of content online. It’s not that New York is a lot worse than London, it’s that because we were working with [the Manhattan District Attorney’s office], we wanted to make sure to focus comprehensively on New York because we had the connection to prosecutors. If we had focused more on London, that number might be higher. But as the effort has grown, we have acknowledged the international aspect and begun the process of discovery of content across the world. So I think right now we’ve observed something like 60 million ads online. We expect the cost for posting those to be in the couple-hundred-million-dollar range. So even just the cost of posting them is quite a significant business presence. And you assume they’re making a profit, right?

AP: One of the examples you showed during your presentation was a visualization of an online network operating out of Dubai that you said “got taken down.” What was the story with that?

CW: The story was that we saw ads that were connected together and the things they had in common were things like email addresses, phone numbers and images. The odd part was noticing how many locations they were appearing in, and that they were appearing all at the same time. And so there was a question, “Why are all these ads appearing at the same time in all these places?” And it turned out it was a recruitment network to try to find high-end escorts. When I said that it was “down,” I meant that the presence of that recruitment network has shifted away from the part of the web that is easy to find and see. I wanted to make the point that these kinds of ads are connected. That allows you to diagnose that this is, indeed, a recruitment effort, and then you can appropriately respond. If you’re a law enforcement agent in Hartford, Conn., you can look at this and know it’s an international network.

AP: One of the most complex problems facing people who work against sex trafficking is the international aspect. Many NGOs are focused specifically on survivors in their areas or regions, where they assist victims of trafficking move on with their lives and prosecute cases. On the other hand, law enforcement is involved with tracking perpetrators and patterns, trying to catch them. How do you work with both parts of the fight against trafficking by using technology?

CW: One powerful aspect of the data involved in the sex trafficking space come from common parts of the internet. The online sales of sex and massage, escort services, parts of the hidden web… those are all useful to victim outreach, law enforcement and prosecution. This creates an opportunity for sharing and interaction. In general, it’s about raising awareness and informing people about cross-jurisdictional trafficking, international border crossing, sourcing of women and young boys, and the financing aspects. Once those issues are raised, then the organizations that traverse those boundaries can move to take action. The technology is a glue, an enabling thing that allows those organizations to communicate — especially if they have standardized mechanisms for storing and sharing information.

AP: Organizations like shelters, legal aid and victims rights groups that have people coming to them, have intake procedures that include interviewing people. They ask things like, who are you, where are you from, how did you come to be here? If they could parse the answers to these questions and analyze that data, it would be a goldmine for you, and for law enforcement. But few NGOs are thinking along these lines. What’s an easy way to give them a head start on trying to get a universal system that’s reliant on technology?

CW: The first thing is to acknowledge the potential uses of information and data, and become data literate. The goal is to become analytically literate, but it’s unrealistic to expect organizations to hire computer scientists to build software, especially in the data world, where it’s a very prized skill set. But they need to acknowledge that technology and data are important and even if they can’t use it, or fund it themselves at first.

Because when they recognize that, it affects an NGO’s policies. This could lead to, for example, a standardized form for intake procedures that could anticipate being machine readable. It is a very important — but small — change from what they currently do. So if you have the notion that half of this form has fields that will be fed into machines later, it would have fixed metadata: like location, time, personal information, and then a narrative with keywords where you can write whatever you want. You can have a very general form that will save you lots of time. And you can also anticipate if other organizations are using it, and your information combined can be that much more useful.

The third thing is forming partnerships with technology organizations. Some of the NGOs [at the Trust Women conference] are starting to sponsor technologies, and many of the big technology firms are beginning to have philanthropic arms. So there are people and organizations interested in supporting the non-technical community. The trick is to combine the skill sets necessary to solve complex problems.

AP: You mentioned finance earlier, and in your speech. A number of banks are cooperating with a data-sharing initiative by the Manhattan District Attorney’s office and Trust Women. Yesterday we heard Cyrus Vance tell us that JP Morgan Chase, Citigroup, Bank of America, Wells Fargo, TD Bank, Barclays, Western Union and American Express have all signed on to share data with law enforcement. How does that work, exactly?

So, they came up with indicators, or ways in which financial transactions might indicate human trafficking, that they could then expose through these reports. The reports would come back to the government and the DA’s office could access them. I’m supportive of the relationship between financial institutions and law enforcement, but I wasn’t involved in it. This work is more about private transactions and customers. On our side, we’ve started by focusing on the public internet, because we feel that is a space that’s being used by traffickers and it offers a challenging technical opportunity to build software and systems to solve an important problem.

AP: So what is DARPA working on next? What does the next stage of this operation look like?

CW: For starters, we’ll continue more [pilot programs and partnerships] around sex trafficking. And with that what we’ll get is feedback on relevance, ease of use, effectiveness. Because the software is all open-source and flexible, it becomes easy to modify given expert feedback. And right now there’s a question: are there three tools, or ten? What kind of functionality should they have? Because it’s a new space, we don’t know. And working with these early partners lets us prioritize.