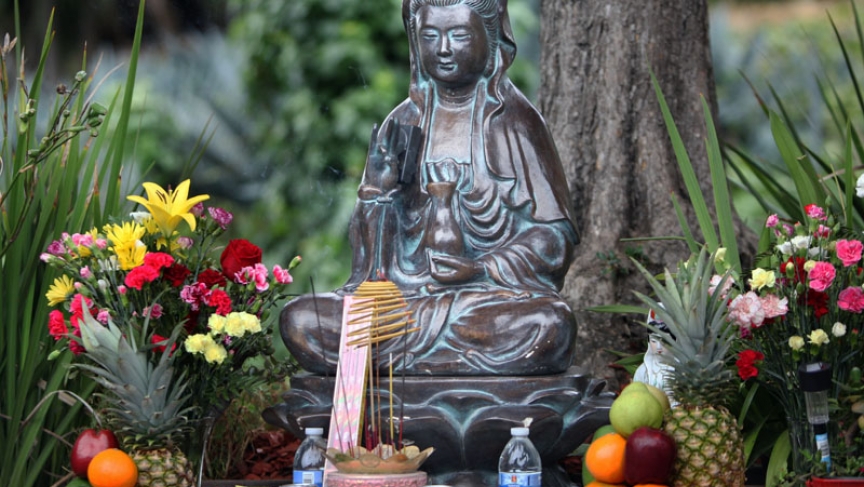 A statue of Kwan Yin, the Buddhist goddess of compassion, has been added to the shrine where a Buddha statue was placed about five years ago. Vietnamese immigrants in the Oakland neighborhood make offerings to the statues as part of a daily ritual.

In the neighborhood that surrounds the corner of 11th Avenue and East 19th Street in Oakland, California, deep potholes and trash mark the roads. But right at the intersection, there's an unxpected sight: a perfectly manicured shrine of Buddha.

It’s an elaborate structure, decked out with flags, flowers and wall hangings. And this is where Vietnamese immigrants in the community pray every day.

Not everyone is thrilled by the clacking of a wooden stick that sometimes accompanies the chanting — some of the neighbors near the shrine call it the "Buddhist alarm clock." But most people here appreciate the shrine. Before it was built, the corner was an eyesore.

“A lot of graffiti, a lot of urination and drug use kind of thing,” says Dan Stevenson, who lives nearby. “Mattresses, tables — just junk, just continual junk." He repeatedly called the city's public works department about the spot. “I practically became friends with whoever was on the other end of the line, it was so regular that we had to call them."

Stevenson isn’t religious at all. But his wife bought a Buddha at a local Ace Hardware store, and inspiration struck. They thought the statue might shift the energy in the neighborhood.

Stevenson epoxied the Buddha to a rock on the corner to ward off potential vandals. “I would have stuck Christ up there if he would have kept the mattresses off,” he says. “I don’t care who’s doing it."

Once the Buddha went up, the trash dumpings slowed down. And after a year, other stuff began to show up: flowers, oranges, small coins — and even people.

Vietnamese immigrants, including a woman named Vina Vo, had adopted the Buddha. Vo is a tiny woman, standing at less than five feet tall. She grew up in a village called Quang Ngai. As a young girl, she learned traditional Buddhist mantras from her grandmother. Every morning they would pray and walk to the local temple.

Vo’s family lived through the Vietnam War. In 1975, when Vina was 17, South Vietnam surrendered to North Vietnam. The north's forces burned down homes in the village, including Vo's; her relatives were beaten and killed and the temple she and her grandmother frequented was destroyed.

In 1982, Vina, her husband and brother left Vietnam on a small boat with 34 other people. Eventually, they made their way to Oakland. In 2010, a community member at the Vietnamese church told Vina about a Buddha that had been placed on a corner just blocks from her house.

A view of the corner this year:

“Maybe you could come take care of it,” he suggested to Vo. “Take care of that space and clean up the thing, and maybe provide a canopy for the Buddha.” She started doing just that, with the help of friends and family.

They recently built a wooden structure to protect the Buddha and put up two flags: one American, one Buddhist. There’s also incense burning and a little tape recorder that plays chants around the clock.

Stevenson, the resident who first put the statue there, is blown away by how the corner has changed. Even the Buddha got an upgrade. “His hair’s been colored. His garments are gold and red. I mean, he’s beautiful," Stevenson says. "I would never recognize him on the street."

Shrines and temples in Vietnam also serve as community meeting places — and that's exactly what the shrine on this Oakland street corner has become. Vina is now a familiar face at the corner as the caretaker for the Buddha. She says caring for the Buddha statue is symbolic of caring for oneself to help make you a better person — or maybe a better neighborhood.

This story was part of a reporting project called The Spiritual Edge.