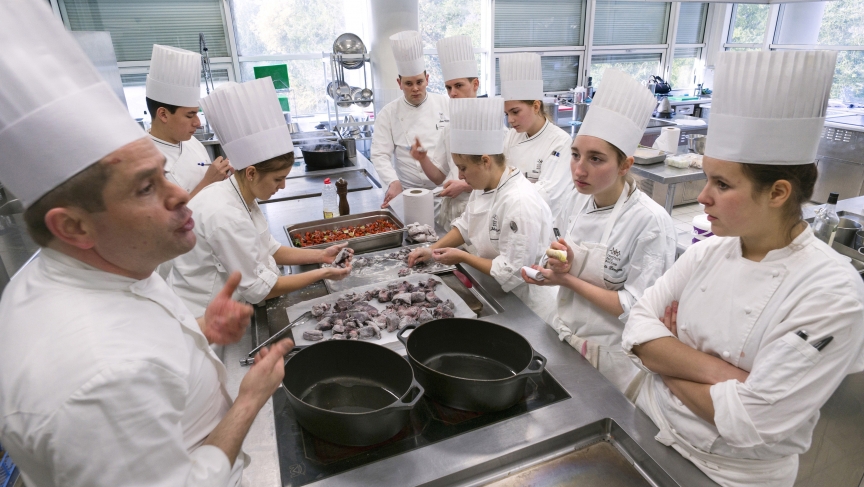 It’s no secret that the kitchens of five-star restaurants can be stressful, volatile places — just look at anything featuring Chef Gordon Ramsay.

But when it comes to verbal abuse — and sometimes even physical violence — against lower-level cooks, French chefs seem to be the worst perpetrators. Now the victims of French kitchen culture are fighting back by signing a manifesto demanding an end to the hazing.

“[French chefs] absolutely have the reputation for that, and I think there’s a lot of very valid reasons for that reputation,” explains James Oseland, former editor-in-chief of Saveur Magazine.

The tempestuous French kitchen has historical roots in royal kitchens. “I imagine there was a lot of very good reasons to get whatever dish one was making particularly right," Oseland says. "And I think it’s just a very old and very ancient legacy, perhaps, that carries on.”

Oseland, who was also judge on the competitive cooking show Top Chef, has seen unforgiving atmospheres in many professional kitchens. “I don’t think this is something particular to the kitchens of France. I think it’s something that extends quite beyond France,” he says

But the pan-throwing behavior is somewhat inherent to the tried-and-true systems of restaurant kitchens, especially French ones. Those workplaces are built on a system of apprenticeship, which creates a hierarchy of chefs — from chef de partie (line cook), to sous-chef (second-in-command), to chef de cuisine (head chef).

While that system may breed abuse of power, it does keep a kitchen running like a well-oiled machine.

“I think there are things about that system that work very beautifully — in fact, even brilliantly," Oseland says. "I mean, look at what the greatest French kitchens are capable of creating. The drive toward excellence, the drive toward perfection, can create all sorts of very, very intense behaviors. But I don’t think that violence is a necessary behavior.”

He also posits that gender may have something to do with it, too — most professional kitchens, he says, are male-dominated realms. “There’s also a very inherent machismo that happens in the kitchen. I think, really, the way to solve all of this would be to get more women in the kitchen," Oseland argues.

“For me, food comes from this very loving, very maternal, very soft place," he says. "It’s about nourishment. It’s about the bonding of culture. It’s not necessarily about throwing pots and pans and screaming at somebody.”

Gender theory aside, Oseland’s hope is that the recent effort by fed-up French chefs will make the restaurant world a more welcoming place.

“Just maybe the foods that are placed in front of us will maybe somehow be imbued with not only this wonderful and enormous history and perfectionism, but also just a little bit more love," he says. "And it’s my idea that those dishes will taste better because of it.”