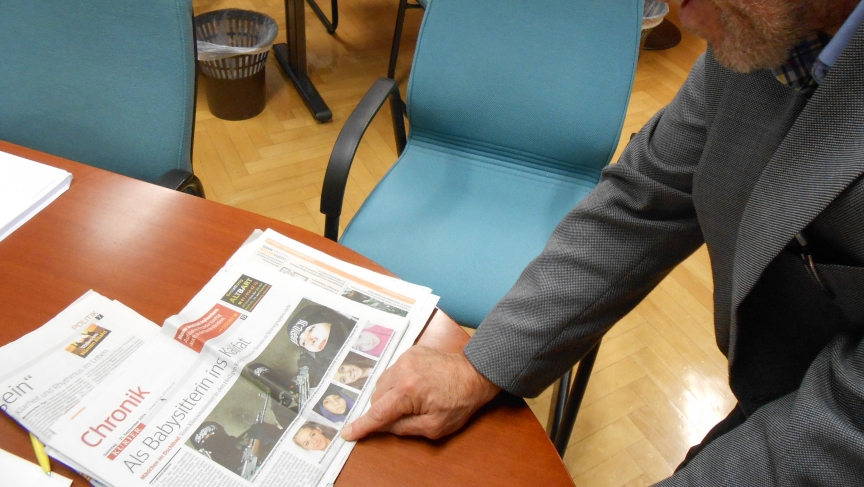 Peter Slanar, principal of Vienna’s Higher Commercial Vocational School, looks at a news story about his former student Samra Kesinovic who joined up with ISIS in Syria.

At the start of the school day, hundreds of students file into the capital’s higher commercial vocational school. Most wear sneakers and hoodies. Some wear headscarves, which isn’t unusual for a student body with a large Muslim minority.

But it was odd when one of them turned out to be Samra Kesinovic, a trendy kid who liked to wear makeup, dyed her hair blond, and danced to pop music at lunch. It was even stranger when, one day, she wrote “I love al-Qaeda” on the bathroom wall.

“She was brainwashed,” says Peter Slanar, the principal here in Vienna’s 10th district. After the graffiti incident, he had a talk with Samra. She told him she wasn’t afraid to die.

“I was shocked when she said ‘what will happen with me in the future doesn’t matter.’ I was shocked. I cannot accept this when a 15-, 16-year-old is saying this,” he says.

Samra unenrolled from school immediately after their meeting in January. In April, she and a friend headed to Syria, where they became poster girls for ISIS.

In Samra’s case, it was pretty easy to tell that something was wrong. But that’s rare.

So, this month, the school board began training middle school and high school teachers how to spot religious extremism before it gets out of hand.

“They didn’t know how to cope with that,” says Heinz Ivkovitz, a professor of religion tasked by the Vienna school board to organize the training. “Is it just, you know, showing off? Imitating someone they saw on YouTube? Or is it really the beginning of radicalization?”

Now there’s a procedure for trying to figure all that out. First, teachers look for signs of radicalization, such as glorifying the Islamic caliphate, an us-versus-them mentality, or embracing ISIS propaganda. Then they talk with parents and get a school psychologist involved. Eventually, police could be brought in.

But here’s where things get tricky.

If schools are too quick to contact authorities, students on the fringe might flee into the arms of a terrorist group, says Moussa Al-Hassan Diaw, an expert on jihadism.

“You take people like a girl who starts to wear the headscarf, or another starts to pray. And you say ‘well, this could be a sign of radicalization.’ That’s really a problem, because if you want to de-radicalize, you can’t pick people out from the classroom and bring them to the police because this would radicalize them,” he says.

So before they call police, schools are instructed to call on mediators from the Muslim community.

On a Sunday afternoon, Diaw is training 15 Muslim kids on how to intervene when classmates set off alarm bells.

He compares images of ISIS beheading James Foley to executions by the Nazis, as students weigh in and take notes. It’s an uphill battle when you’re up against slick recruitment videos online.

Abu Hamza Al Austria is among 140 Austrians believed to have joined ISIS. In a YouTube clip, complete with flashy audio effects and Islamic music, he describes not only the glory of fighting for ISIS, but the “luxury” as well. Swimming pools and grand villas await all newcomers, he vows.

“They’re using a combination of tricks and treats. ... It looks very similar to the way online predators recruit children,” says Mia Bloom, a criminology professor at the University of Massachusetts Lowell’s Center for Terrorism and Security Studies. “This is a kind of child abuse. And I’m hoping we treat them as victims and not as suspects.”

In Vienna, principal Slanar is still shaken by how ISIS ensnared Samra. He’s attended the training sessions, but he’s not convinced they’re a sure-fire way to prevent radicalism. After all, he says, Samra was your typical teenager.

“I mean Samra was integrated,” he says in dismay. “She had good marks. We don’t know why she left Austria to go to Syria. I don’t know.”

“What he does know is some students seem to be impressed by Samra’s example. More kids, he worries, might follow in her footsteps.