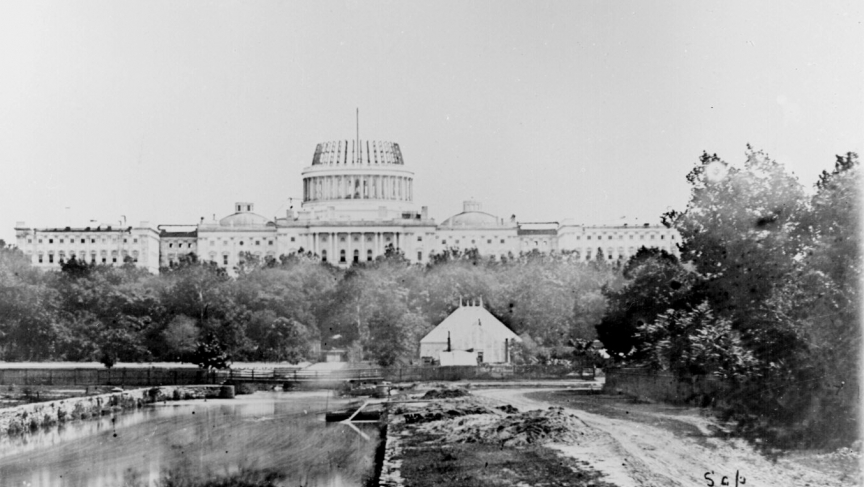 The US Capitol building is shown under construction in 1860. President Abraham Lincoln directed that work continue through the Civil War.

A lot of Americans might agree that Washington is "a contemptible hamlet." But when Pierre L'Enfant described the city that way in the 19th century, he was calling out its actual streets, not its culture.

“The city as we know it today looks very different than it did in the 19th century,” says J.D. Dickey, the author of a new book called "Empire of Mud: The Secret History of Washington, D.C." “Back then, a lot of it didn’t exist. If you wandered west of the Washington Monument, you were underwater — all of that was filled in later.”

Dickey explains that the capital city was filled with “muck” and maintained its traditionally humid climate. The areas currently occupied by the World War II Memorial and the Lincoln Memorial were once known as the Potomac Flats — a place that was more septic tank than national point of pride.

“It was known for various mosquitoes and all kinds of infectious diseases,” Dickey says. “It was also the outlet of the much-feared and dreaded Washington City Canal, which is now Constitution Avenue. The city canal was originally designed to be a fine channel for bringing commerce from one part of the city to another. It ended up being an open sewer that ran right by the Capitol, through the middle of downtown, with its outlet near the Potomac Flats.”

Many Americans are taught that George Washington asked L'Enfant, a French-American architect and Revolutionary War veteran, to design the capital city. L'Enfant laid out a visionary plan where important buildings were strategically placed by waterways and broad boulevards

But much of the plan didn't survive past the blueprints, and major stretches of the city remained cesspools.

“If we were going down Pennsylvania Avenue, we’d probably be on horseback or in a carriage because the street was unwalkable,” Dickey says. “It had huge furrows of mud during certain seasons and dust in others. Some people claimed it was unpassable, and it was really an unfortunate aspect of the city that this great thoroughfare was in such terrible condition.”

The history of Washington, DC, is also one of deep racial divides. Though many areas have improved since the 19th century, it remains one of the most economically and racially segregated places in the United States. Dickey says these divisions have roots that can be traced back to the 1800s.

For one, slave labor built Washington. “They built the Capitol and their labor may have been used on the White House," Dickey says. "They were digging trenches for the Washington City Canal, and all other aspects that you can think of that went in to the creation of the early city. People called it the ‘Great Man Market’ of the nation.”

Dickey says that slave markets operated openly in Washington, adding that “gangs” of slaves were regularly dragged through the streets on chains. At major hotels, slaves were chained to the walls of basements while their owners entertained guests on the upper floors.

“The legacy of slavery is a deep and disturbing one, and it’s one that’s really hard to get away from when you plunge into the history of the city,” he says.

While Washington has come a long way, Dickey says the city still has much further to go. The capital now anchors a booming economy, albeit one that's much kinder to richer white workers than the city's minorities.

“I think the modern development of Washington, D.C., actually makes Pierre L’Enfant look pretty good,” Dickey says. “His blueprint has come to fruition with the beautiful residences, the investments, and the original conception of gentrification — that you would put the gentry somewhere — has come to pass. But of course, this is only one aspect of the city. Co-existing with that is still a desperate poverty.”