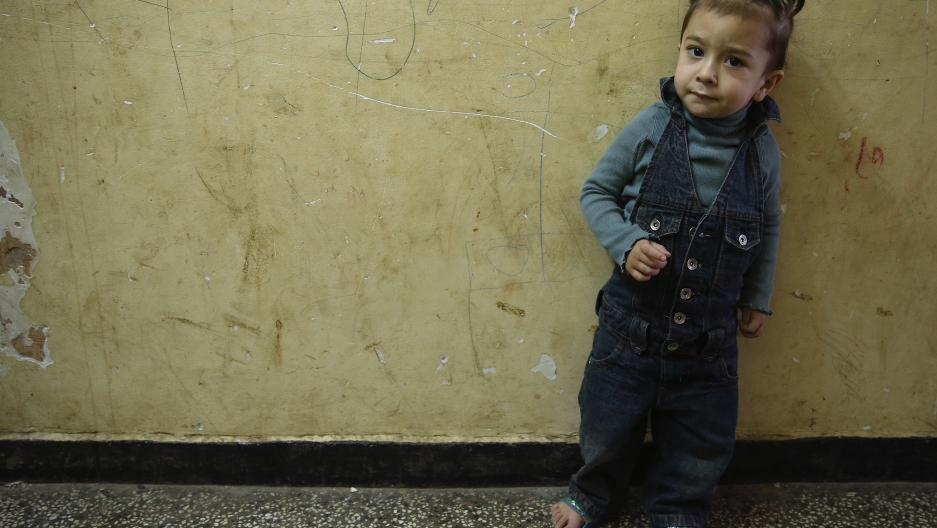 SOFIA, Bulgaria — Sitting on a park bench on this city’s outskirts, Aras Mohamad tries to explain why he fled Syria and how he ended up living in a refugee camp in the European Union’s poorest country.

Fighting was raging around the university dormitory in Homs where he lived, the 25-year-old Kurd says.

“One day I was taking a bus and IS fighters pulled it over,” he says, referring to the radical militant Islamic State. “They said they could easily kill me because I’m a Kurd, but they let me go after I gave them all my money.”

Crossing through Turkey, Mohammad arrived in Bulgaria, the EU’s easternmost country, where he lives in a communist-era woodwork academy that’s been repurposed as a refugee camp.

“I’m just trying to have the best possible life for me and to support my family,” he says.

Reaching the EU alone wasn’t enough for that. Now he plans to leave Bulgaria as soon as he obtains all his documentation in order to look for work further west.

“Bulgaria can’t help me with work,” he says. “Bulgarians can’t find a job here, so how can Syrians?”

Last year, the Bulgarian government came under strong criticism as it struggled to handle some 11,600 refugees who came flooding into the country, most of them fleeing conflicts in the Middle East. That was five times the normal level and led to overcrowded living conditions, few resources and poor communication with those arriving, many of whom were left to wait months for their refugee status to be processed.

But with more prosperous EU members grumbling about taking on refugees during a year of record levels for illegal migrants, prospects for establishing a secure life elsewhere aren't good.

Although new arrivals to Bulgaria are down to around 3,000 this year, thanks in no small part to the construction of a controversial fence along the border with Turkey, Bulgaria continues to struggle with integrating people who for the most part know nothing about the country and don’t want to be here.

Bulgaria hosts a dozen refugee camps, typically abandoned communist-era buildings now used as temporary shelters. Inside, hundreds of Syrians, Afghans, Iraqis and others wait for their papers to be processed in the hope that being granted official refugee status will enable them to move elsewhere in the EU.

“They don’t learn the language, and without that they won’t find a job or make a life for themselves,” says Nadezhda Todorovska, head of social welfare at the Bulgarian Red Cross, which offers language and vocation classes at the camps as well as other physical and psychological assistance.

They’re not the only ones who want to leave.

Bulgaria has been hemorrhaging its own workforce for years as people have gone overseas looking for better-paid opportunities.

Two years of political turmoil in the country have contributed to economic stagnation and a growing sense of crisis among many Bulgarians.

Refugees arriving in the country often find themselves greeted with suspicion and few work prospects. Earlier this year, residents of one village tried to stop refugee children from attending a local school. Racially motivated attacks have also occurred.

A humbling report issued in late September by the State Agency for Refugees showed that in the previous four months, just 19 legal refugees had signed employment contracts.

For the lucky who do find work, average wages are the equivalent of just $510 a month. Minimum wages here are around $233, the lowest in the EU.

More than 600 refugees live in the Ovcha Kupel camp on Sofia’s outskirts, where the paint is peeling and conditions are basic.

Occupants receive two meals a day and can choose to take classes in Bulgarian language, hairdressing, sewing and cosmetics in order to have at least some work prospects.

Few refugees arrive with documentation that can vouch for their professional training, if they have any.

“We left because IS is targeting Kurds,” says Ari Rasho, 27, a Kurdish furniture maker who fled Syria with his wife and 2-year-old son six weeks ago. “Most of my friends and family are also leaving.”

Rasho had paid traffickers more than $6,000 to take him and his family all the way to Britain. They were dropped off in a park in Sofia instead and left to fend for themselves.

“We didn’t know anything, how to speak Bulgarian or how to do anything,” he says, “so we were caught by the police.”

Like almost all the refugees GlobalPost interviewed, Rasho plans to leave Bulgaria as soon as he and his family are able to, although many EU countries, notably the UK, have shown a reluctance to take in additional refugees.

Seventy percent of EU asylum applications are made in Germany, Sweden, France, Britain and Italy.

Most asylum seekers entering Bulgaria try to cross the country without being stopped in order to seek asylum in Western Europe.

Although those who gain official refugee status in one EU country can travel to other countries in the bloc for up to three months, they’re expected to return to the place they were registered.

That means that if they’re caught overstaying, they’re returned to Bulgaria.

“We hear that Germany wants to send back 3,000 refugees [to Bulgaria], though so far only 100 returned,” the Red Cross’s Todorovska days.

Not all refugees have given up on making lives for themselves here, however.

“I knew nothing about Bulgaria before arriving,” says Mohamad Ajub, a 22-year-old Afghan who arrived two months ago. “I just want to live somewhere safe. If I can find work here, I'll stay.”