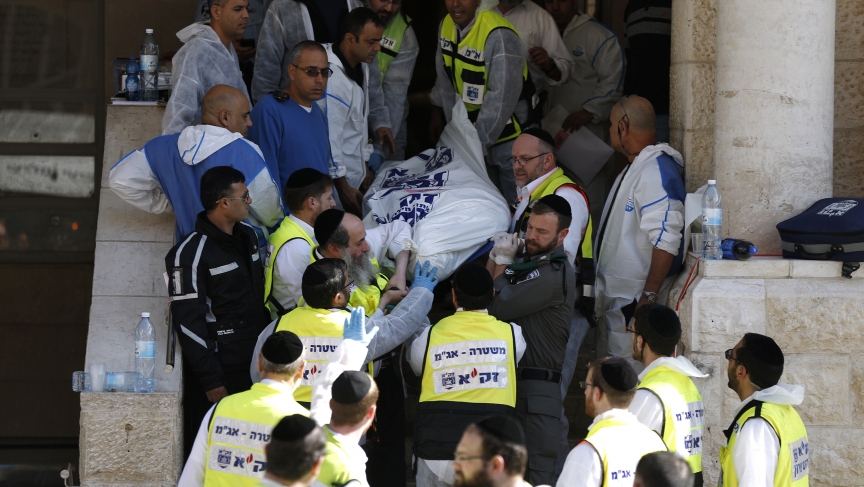 Israeli emergency personnel carry the body of a victim from the scene of an attack at a Jerusalem synagogue on November 18, 2014.

Two young Palestinians entered a synagogue in West Jerusalem on Tuesday morning, armed with meat cleavers and a handgun, attacking worshippers inside during their morning prayers. Four worshippers were killed.

“We came to pray,” one witness to the attack told the Associated Press. “We were coming into the synagogue and we heard gun shots from downstairs. We heard one shot, two shots and then a flurry of shots, at least five or six or seven shots, [and] we all ran out.”

Both attackers were shot and killed by Israeli police, and one officer died later on Tuesday from wounds he sustained during the incident. It was the worst attack of its kind in Jerusalem since 2008, but it was just the latest in a series of vehicular and knife attacks against Israeli Jews in recent weeks.

After several years of relative calm, Jerusalem has been on a knife’s edge in recent months over the war in Gaza and recent disputes over the city's holiest site, known as the Noble Sanctuary to Muslims and the Temple Mount to Jews.

"We strongly condemn this incident and do not accept under any circumstances attacks on civilians," said Mahmoud Abbas, the president of the Palestinian Authority. But his added that "at the same time we condemn these actions, we also condemn the attacks on the Al-Aqsa Mosque."

Israelis blamed Abbas and other Palestinian officials for inciting the violence, but a Marxist militant group called the Popular Front for the Liberation of Palestine claimed responsibility for Tuesday's attack. Israeli police said they are looking into any other affiliations the suspects might have have had. Other Palestinian factions praised the synagogue attack, including Islamist militants from Hamas and Islamic Jihad.

In addition to the spate of attacks, Palestinian neighborhoods in the city have seen frequent clashes between Israeli police firing tear gas and stun grenades, and young Arab men shooting fireworks and throwing rocks. For the first time in many years, Israeli Prime Minister Benjamin Netanyahu has ordered police to set up roadblocks near Palestinian areas of the city.

“As a nation, we will settle the score with every terrorist and their dispatchers, and we have proved we will do so," Netanyahu said in remarks broadcast on Tuesday evening, cautioning against vigilante attacks. "No one may take the law into their own hands, even if spirits are riled and blood boiling,”

Daniel Seidemann, a lawyer and activist from West Jerusalem, says the reality these days is a city divided. “My prime minister, Mr. Netanyahu, calls Jerusalem the undivided capital of Israel. The only place that Jerusalem is undivided is in the imagination of right-wing ideologues,” Seidemann said in an interview with the BBC.

“There is a border in Jerusalem,” Seidemann added. “And it is as impermeable a border as if it were an electrified fence.”