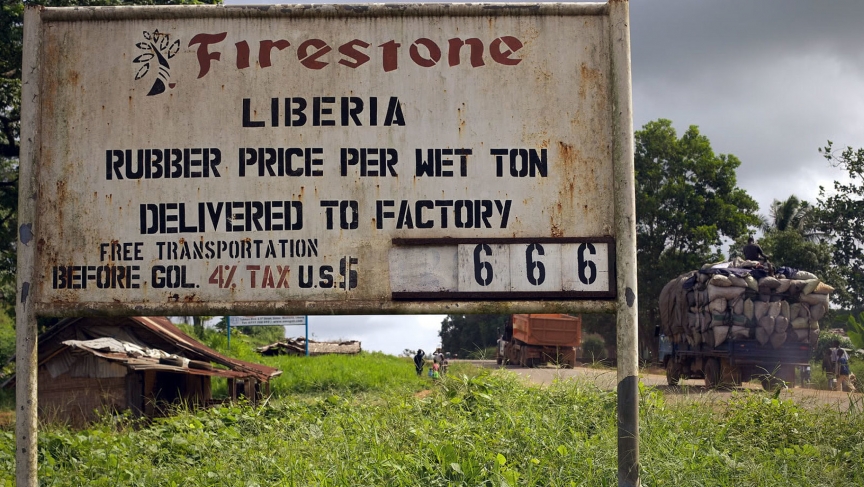 Firestone has operated a rubber plantation in Liberia since 1926.

The Firestone brand is synonymous with tires. Over the years, much of the rubber used to make those tires has come from Liberia in West Africa.

A new documentary, Firestone and the Warlord, a joint investigation by Frontline and ProPublica, tells the story of Firestone's Liberia rubber plantation, especially during Liberia's civil war.

Frontline producer Marcela Gaviria says the documentary focuses on the uneasy relationship between the US tire company, which by then had been purchased by the Japanese company Bridgestone, and the American educated Liberian warlord Charles Taylor.

"I think [Charles Taylor] had huge ambitions from the get go, and in 1989 when he decided that he was going to overthrow [former Liberian president] Samuel Doe, he knew he needed to find the most strategic spot in Liberia," Gaviria says. "The Firestone Liberian rubber plantation is right next to the airport, it's got everything a rebel army would want, communications, fuel, supplies. So Charles Taylor, being an intelligent man, looked at this spot and said that's where I'm headed. I need this plot land if I'm ever going to reach Monrovia."

The relationship between Firestone leadership and Taylor is remarkable, Gaviria says. He used the plant as his base of operations in a civil war that ultimately killed 300,000 people.

"We managed to get a trove of documents and state cables that really document the relationship," Gaviria adds. "We actually have the correspondence of the managers at the time and one of the diaries of the main managers, who kept meticulous notes about what happened."

The investigation reveals that between 1989 and 1992, Firestone struck a deal with the warlord and channelled millions of dollars to Taylor in exchange for being able to keep the profitable rubber business in operation. That money, in Taylor's own words, provided the "financial assistance that we needed for the revolution."

Eventually the chaos and the brutality of the civil war came to an end. Taylor was tried at the International Criminal Court at the Hague and found "responsible for acts of terrorism, murder, rape, sexual slavery, cruel treatment, recruitment of child soldiers, enslavement and pillage.” The warlord is now serving a 50-year prison sentence.

At least one US diplomat who was serving in Liberia during those years of conflict comes down harshly on Firestone's secret dealings with Taylor. Former US Chief of Mission Gerry Rose says he believes Firestone has blood on its hands. "I believe they facilitated a warlord in his insurrection and in the atrocities that he created. Sometimes, people make decisions they regret. I don't know if Firestone regrets the decisions they made in Liberia during the insurrection," he adds.

For its part, Firestone defends its decision to stay in Liberia, and insists it did not collaborate with Charles Taylor as it sought to keep its profitable rubber business up and running. The company says its decision "to remain in Liberia was very costly for the company. ... Firestone was able to preserve an important economic asset for Liberia, and we are proud of that.”

The nagging questions that emerge from the film are, did Taylor turn the plantation into a rebel base that he used to wage war — and if so, what was Firestone's complicity in the civil war?

Gaviria says she hopes people will watch the film and decide that for themselves.

Firestone and the Warlord airs Tuesday, November 18 at 10 p.m. on PBS and will stream in full, for free, online on PBS.

You can read the full story behind the joint investigation by PBS's FRONTLINE and ProPublica at propublica.org.