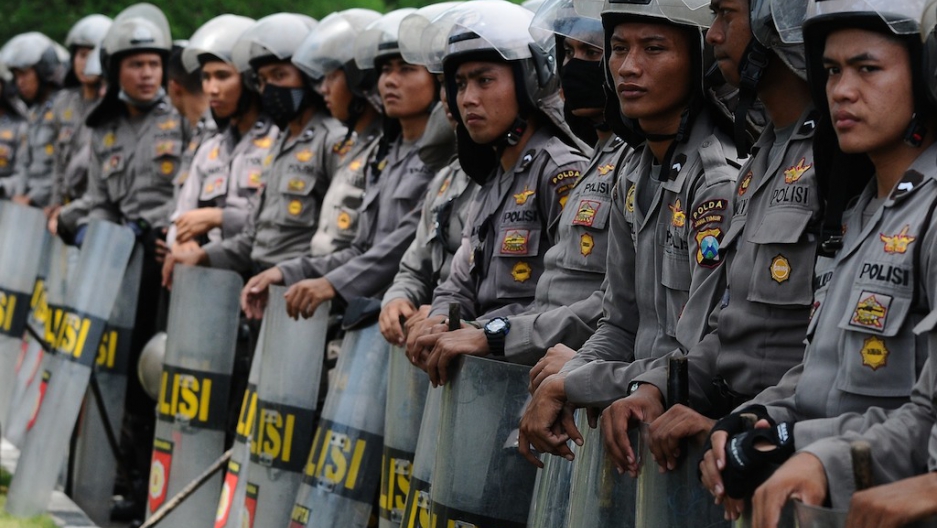 Indonesia wants more women to join the police. But invasive requirements, including virginity tests, is not making it easy.
Credit: Robertus Pudyanto
Share

But becoming a policewoman in Indonesia is not easy. Requirements for female candidates include being 17.5 to 22 years old, not being or having been married, and having completed high school.

Other general requirements, head of the policewomen academy Sri Handayani explained to Indonesian magazine Tempo last year, include “fearing God” (meaning following one of the six officially recognized religions), not needing glasses, and being at least 165 centimeters tall (about 65 inches).

What she failed to mention at the time is that female applicants are also expected to be virgins.

This “discriminatory and degrading” requirement, as Human Rights Watch (HRW) calls virginity tests in a report published Monday, is actually clearly stated on the national police jobs website. “In addition to the medical and physical tests, women who want to be policewomen must also undergo virginity tests,” the website says. “So all women who want to become policewomen should keep their virginity.”

But several of the female applicants interviewed by HRW said they found out about the test just before it took place.

One of the women, who applied in 2013, said she was “shocked” when she was told that the health tests included “checking our insides” and a virginity test. “I felt embarrassed, nervous, but I couldn’t refuse,” she says, clearly distressed.

“If I had refused, I couldn’t have become a policewoman.”

Another woman said the conditions in which the test was conducted were far from ideal. She had to fully undress in front of 20 other candidates, and the virginity test took place in a separate room that had no door, alongside a second applicant.

“Entering the virginity test examination room was really upsetting. I feared that after they performed the test I would not be a virgin anymore. They inserted two fingers. It really hurt. My friend even fainted because ... it really hurt,” she said.

While she understood the point of health checkups, she called virginity tests “unnecessary” and “irrelevant.”

“It was painful and humiliating,” she said.

At the police headquarters in Jakarta, the head of the health center, Rusdianto (who like many Indonesians only goes by one name) would rather not talk too much about virginity tests. “It’s not only a virginity test, it’s also a genital and urinary examination to check for diseases and infections,” he insists. He also says the virginity tests do not eliminate candidates.

Asked why virginity tests are needed, he stays vague. “All tests” conducted are meant to get “the best” applicants, he says.

The tests are a longstanding practice. One retired police officer told HRW her class had to undergo virginity tests in 1965.

“It’s an old practice based on belief that a [female] virgin is healthier and morally fitter,” HRW Indonesia researcher Andreas Harsono says.

He called for the authorities to immediately abolish the “humiliating” practice, which he says goes against Indonesia’s human rights law. He also notes Indonesia has ratified the Convention on the Elimination of All Forms of Discrimination against Women, and that the national police principles for recruitment need to be “nondiscriminatory” and “humane.”

National Police High Commissioner Sri Rumiati told HRW she had been trying to have virginity tests banned for years.

She herself had to undergo the test thirty years ago. Last time she raised the issue, at a human resources meeting in 2010, she says a colleague responded with, “Do we want to have prostitutes joining the police?”

But she says the official in charge of human resources ended up requesting an end to the tests. “I don’t know why it’s still taking place,” she says.

Sri Mulyati, a women’s rights activist who has long worked on the subject, says the practice is not limited to the police. She says women in the army also have to undergo the test, as well as women willing to “marry a member of the police or the army.”

Andy Yentriyani, commissioner at the National Commission on Violence Against Women, notes that it’s not the first time Indonesia has had this debate.

In 2013, the education agency in the city of Prabumulih (Sumatra) announced a plan to add virginity tests to high school admission requirements. The agency said it had noticed increasing instances of premarital sex and prostitution. The project faced strong opposition, and has been abandoned for the time being.

Yentriyani laments that for women, virginity is still seen as a “symbol of purity” in this Muslim-majority country. She says she believes sexual education would be more efficient than what she calls a “misogynist” practice that goes against “basic principles of human dignity and human rights.”