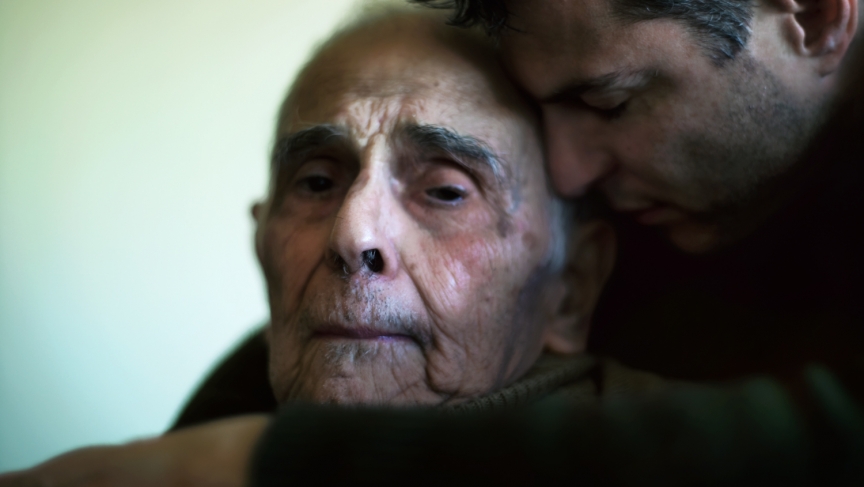 Phil Toledano hugs his father in a photo from his book, "Days With My Father."

When photographer Phil Toledano's mother died in 2006, Toledano — an only child — became his father's main caregiver. He brought his camera with him.

In the beginning, Toledano says, "I was taking photographs for myself. I was recording something for myself." But when he started sharing the pictures online, the response was overwhelming.

(Editor's note: This is the most recent installment of a full series on death and dying produced by To The Best of our Knowledge. Several pieces will be featured here on PRI.org in the coming weeks — but you can see all of it at TTBOOK.org.)

"I remember very clearly thinking to myself when I was taking photographs or writing about my dad that it was such an extraordinarily personal project for me that there was no way that anyone else would be interested in it," Toledano says. "And I couldn’t have been more wrong."

He produced a book of the photos, called "Days With My Father," in 2012, which he describes as "not really a book about death. It’s a love letter from me to my father and it’s a book about our last few years together."

The book served many purposes for Toledano, including leaving a record of the good moments he had with his father.

He also thinks capturing those moments helped connect readers to his work, showing more than simply grief or sadness.

"A lot of the work I’ve seen is so unremittingly sad about that particular stage of life, and I think that I just happened to be lucky about the way my father and I lived those last few years together," Toledano says. "There’s, of course, sadness in there. But there’s also everything else that makes up life, which is beauty and strangeness and humor and, you know, heartbreak.

This story is based on an inteview from PRI's To The Best Of Our Knowledge. You can view some of Phil Toledano's photos below thanks to a collaboration with FlakPhoto, an independent photo/arts collaborative that promotes the discovery of photographic image-makers from around the world.