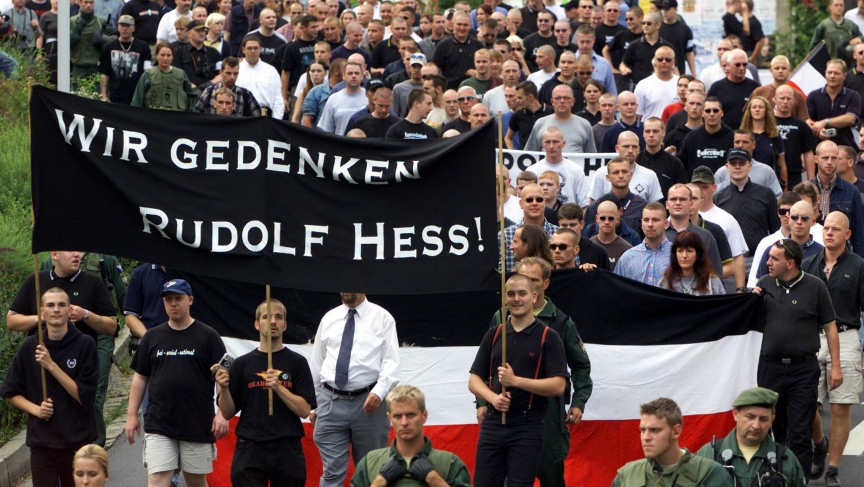 Protestors hold up a banner reading "We remember Rudolf Hess" during a demonstration in Wunsiedel, some 120 kilometres northeast of Nuremberg August 18, 2001.

For more than a decade, neo-Nazis have marched in the German town of Wunsiedel every year to pay tribute to World War II-era Nazi leader Rudolf Hess, who was buried there. The marches have drawn counter-demonstrators and have led to violent clashes. The town tried to end the marches by removing Hess from the cemetery in 2011. No luck. So this year, townspeople tried a new tactic.

Instead of attempting to stop the march, they embraced it. They turned the march on its head by transforming it into a walkathon to support an NGO that works to reform neo-Nazis. Local people and businesses donated 10 euros ($12.50) to the reform group for each meter traveled by the neo-Nazis.

According to the Washington Post, residents who had long stood back and avoided the march now cheered on the neo-Nazis. All told, 10,000 euros were pledged. The money will be used to help neo-Nazis abandon their discriminatory beliefs and integrate into society.

Norway’s new passport is a work of art

While Sweden is busy promoting its national visual identity with a new font, Norway is putting its creativity into its passports. Norway’s National Police Directorate this week announced the winner of its competition to redesign the passport, giving the prize to Oslo design studio Neue.

The new version of Norway's international travel document is being called a work of art. On the outside, it looks pretty typical, except it comes in bold white, turquoise or red, depending on the type of passport. The magic, though, happens on the inside. In addition to an artistic design that depicts the country's natural beauty, the passport transforms itself under a UV light to reveal the bands of northern lights that often grace the Norwegian night sky.

The Guardian has photos of the passport and says it will take about two years to get the new documents into circulation. It turns out the art isn't enough. Now designers have to add the security features required for modern passports.

America's special relationship with Liberia is all about history

When Abraham Lincoln signed the emancipation proclamation, setting millions of African Americans free, he also set in motion a series of events that led directly to the founding of the country we now know as Liberia. Lincoln, and many other white Americans, thought free black Americans would never be able to live side-by-side with their former oppressors. Some black Americans thought the same — so they decided to leave the US and form their own country, in Africa.

Of course, this new form of colonialism had several problems, not the least of which were that people were already living in the territory that would become Liberia. The new arrivals from America often treated the locals as slaves were treated in the US. That created some of the conflict that has marred Liberia's recent past. PRI's The World has a short video explaining the complicated history that has joined Liberia to the US.

International travel itself can even be downright artful

Every day and every night, thousands of planes fly the skies all over the world. And they have intricate, and logical, patterns. For example, flights leave the US East Coast in the evening and arrive in Europe in time for dawn. When the data is tracked on a map of the world over time, you see not just the flight lines, but beautiful depictions of our cycles and globe-trotting.

The National Air Traffic Services in the UK gathered its flight data and put together a video that shows the ballet of modern air traffic control, complete with music. Quartz has some highlights from the video, including that early morning rush to Europe from the US, the holding patterns over busy London airports and even the lanes used to shuttle traffic from one spot to another. It's well worth watching as you contemplate the human condition.

A photographer shared his personal experience with loss with the world

Photographer Phil Toledano spent half a decade as his father's primary caregiver, helping him through ordinary and extraordinary days. In order to process, and come to terms with, his father's imminent death, he took pictures — dozens, hundreds of pictures that capture all aspects of life and death. While Toledano took the photos for himself, he ultimately decided to publish the photos.

When he did, he was amazed by the reaction. He shared the photos with PRI's To The Best of our Knowledge as part of a special project on death and dying. While the photos unquestionably capture the end of someone's life, Toledano says he doesn't view the published work as being about death. Rather, "it’s a love letter from me to my father and it’s a book about our last few years together." Check out the photos at PRI.org.

Delhi was accused of having some of the worst pollution in the world earlier this year, but, so far, this fall has been good to Delhi residents. Usually as temperatures drop, the air becomes heavy and static, trapping pollution. Then northwesterly winds bring in smog from fires in agricultural areas. But this month's inconsistent winds and sparse moisture have allowed the worst of the smog to escape, leaving city residents breathing ease, at least for the moment, according to the Times of India.