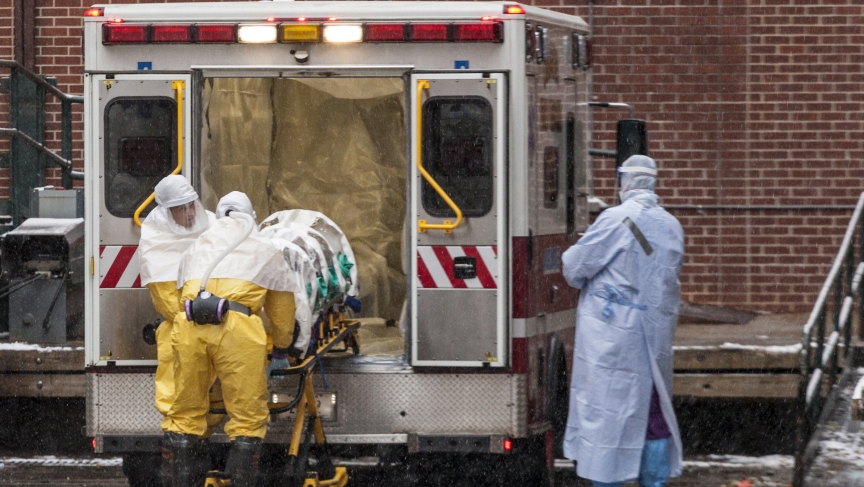 Dr. Martin Salia is placed on a stretcher upon his arrival at the Nebraska Medical Center Biocontainment Unit in Omaha, Nebraska, November 15, 2014. The Sierra Leonean surgeon who is critically ill with Ebola was flown to the United States from West Africa on Saturday and was transported to a Nebraska Medical Center, where he died Monday.

The global response to the Ebola outbreak in West Africa has relied heavily on volunteers — those from the medical community who have sacrificed their time, skills and safety to help the victims of the crisis.

President Barack Obama recently said that despite waning news attention, “we are nowhere near out of the woods yet in West Africa” — meaning volunteers are still desperately needed.

Sharon McDonnell is one of those volunteers. She will soon be leaving her home in Yarmouth, Maine, for Monrovia. Throughout her stay, we will check in with her about her experience.

“I think I’m a lot like a journalist — if something’s on fire, or something big is happening, I tend to run toward it,” she says. “If I’m scared of anything, it’s really missing my family.”

During her stay in Liberia — a country whose Ebola outbreaks have been lessened, but not eliminated — McDonnell will be offering her skills as a nurse, physician and epidemiologist.

“As a physician and nurse, I am at the three-foot level — I’m taking care of people directly,” she says. “As an epidemiologist and a public health practitioner, I am the doctor of the community — I’m at the 30,000-foot level, and I’m trying to say what makes people well, what makes them unwell.”

Though she doesn’t have experience with an outbreak on the scale of the current Ebola crisis, her experience working during the AIDS crisis of the 1980s offers her a leg up — and some perspective.

“In 1983, when we had our first case of AIDS at UCSD Hospital, we were all in suits — we were wearing full gear to see a single patient with HIV/AIDS. We didn’t know how it was transmitted. We didn’t know an awful lot,” she recalls.

McDonnell claims that some of what she is witnessing during the current Ebola epidemic — widespread quarantine and unfounded public fear — reminds her of the early days of the AIDS crisis.

“There is something about uncertainty that does not bring out, necessarily, the welcoming side of people. And I think we forget how scary that is.”

For McDonnell, and a lot of others in her field, a major problem when it comes to fighting Ebola is a lack of infrastructure — and thus a lack of communication.

“When you’re in an Ebola treatment unit, you have to be completely isolated from every other part of a hospital. So the information you have in there to help you manage cases and keep track of things you can’t easily take out,” she explains.

According to McDonnell, there are some treatment centers where, due to lack of technology and electricity, clinicians have had to memorize charts, take off their equipment, and then transcribe — by hand — what they can remember.

“It turns out the combination of the incredible quarantine and containment that comes in place with not good electricity [means that] simple sorts of networks are not necessarily in place.”