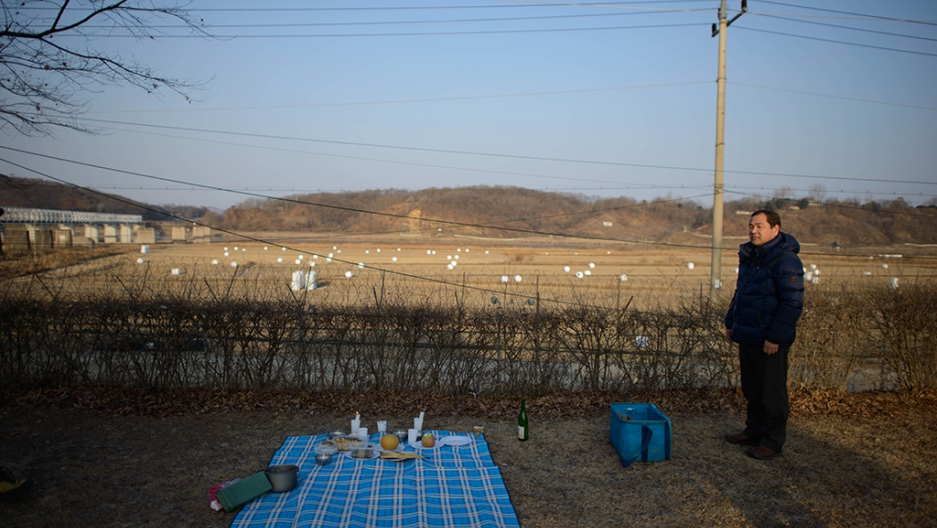 A man prepares to conduct a memorial ceremony for his relatives in North Korea, near the Freedom Bridge (far L) at the Demilitarized Zone (DMZ) at Imjingak, Paju, in South Korea's Gyeonggi Province.
Credit: ED JONES
Share

Editor's note: This essay is the second in a series, “Conservation Innovation: Voices of a New Generation,” which has been produced by the Lincoln Institute of Land Policy in collaboration with The GroundTruth Project on GlobalPost. The essays were written for presentation in Sydney, Australia during the November 2014 World Parks Congress organized by the International Union for the Conservation of Nature.

CALGARY, Alberta, Canada — Picture a nature reserve and the first images that spring to mind are lush forests, fresh water and wildlife in pristine national parks or designated conservation areas.

And indeed the estimated 200,000 protected areas in the world, encompassing more than 18 million square kilometers of land, do directly promote global endurance of biodiversity and ecosystem services. But what about past and present military lands?

Though military activities and wars have taken their toll on the earth, it is becoming increasingly apparent that military landscapes serve as de facto protected areas and wildlife refuges, complementing the global inventory of officially protected lands.

The fact that geopolitics can create unofficial and unanticipated nature reserves was evident even in the early 19th century, when Lewis and Clark observed heightened wildlife numbers living on land in western North America that stood between native nations at war with one another.

More contemporary examples include the Iron Curtain Trail, a public green space along the military border that once separated the Soviet Union from Western Europe, and the North-South Korean demilitarized zone, a four-kilometer-wide, 250-kilometer-long corridor that since 1953 has served as a human-excluded wildlife sanctuary.

Beyond areas where armed conflicts have played out, military training areas also conserve large tracts of natural areas and wildlife habitat. These lands amount globally to over 100,000 square kilometers across a wide variety of ecosystems, used by the armed forces of countries around the globe to support the preparation of troops. In some cases, such military training grounds now host more rare and endangered species than nearby national parks, and may even represent landscape and ecosystem types no longer in existence elsewhere in a given nation.

Why are military lands now in this somewhat paradoxical yet pivotal role in the field of land conservation? Such lands are: often relatively large in size; largely restricted from public access; and generally absent of cultivation, urban and residential development, and resource extraction activities, including forestry, oil and gas development, and mining.

Still, these lands are usually not in pristine condition. Regular military activity on military lands, including the explosion of munitions, heavy vehicle tracking and chemical contamination, produces significant localized destructive impacts. Generally, the patterns of use vary greatly across space and time, depending on recent intensity of use. Interestingly, such patterns of intermittent disruption mimic the biodiversity-promoting effects of otherwise suppressed natural disturbances, such as wildfires and movements of large herds of animals.

As a biologist for the Canadian Department of National Defence (DND) for over a decade, I have noted and assessed first-hand the remarkable environmental assets found on Canadian military lands. I have also championed the need for more sophisticated land management practices that promote consistent and informed decisions aligned with sustainability objectives.

The need for greater land management capacity is especially evident for Canadian Forces Base (CFB) Suffield, the largest military base in Canada. This base within southern Alberta extends across 2,690 square kilometers, a land area roughly equal to that of Rhode Island.

A veritable North American Serengeti, CFB Suffield hosts over 1,100 documented species including over 25 species at risk, as well as massive herds of elk, deer, and pronghorn antelope. This uncultivated expanse of native prairie also encompasses a large, nationally designated protected area. Out of over 50 areas designated as a National Wildlife Area under the Canada Wildlife Act it is the only one managed by a department other than Environment Canada.

For over 75 years, military use has passively co-existed and even promoted the natural bounty at CFB Suffield. However, the military now occasionally finds itself constrained by environmental regulations that apply only because specific natural systems and species have been allowed to survive there.

Furthermore, military lands, despite their specific and somewhat dangerous purpose, are increasingly under pressure to allow other non-military land uses, most notably resource extraction. CFB Suffield, for example, is now feeling the cumulative effects of the 1970s intergovernmental decisions to enable oil and gas development within its borders.

As thousands of oil and gas wells have been placed on the CFB Suffield landscape – albeit with the strict caveat that they must be placed below ground so as not to impede military maneuvers – the environmental status of the area is increasingly threatened by habitat fragmentation, invasive species introduction, and contamination.

In effect, resource extraction activities that started with the installation of only a handful of wells have, over time, altered the integrity of the landscape. The situation presents an extraordinary management challenge for military land managers attempting to achieve acceptable military training and environmental outcomes atop a subterranean, three-dimensional expanse of oil and gas deposits.

To meet this challenge, DND has, in consultation with land users, engaged in a multi-sector land use visioning exercise. This effort is intended to explore the varied land use values, needs, and forecasted requirements, and conceptualize a suite of spatially-modeled land use scenarios. DND hopes to use this process at CFB Suffield to refine its decision making amidst the legal, social, economic, and environmental risks, benefits, and trade-offs inherent in active sustainable land management.

With so much at stake at CFB Suffield, sustainable land management can no longer be a passive act for the military. Rather, it is an active, ongoing effort that aims to fulfill military mandates, protect wildlife, wetlands, and archaeological sites, maintain regional ecosystem function and honor oil and gas mineral rights.

This Canadian example illustrates the ecological challenges faced by military lands around the world. It is one demonstration of the important role being taken by modern militaries across seven continents to promote national and global land stewardship. Global ecological sustainability should only benefit as more military organizations embrace active sustainable land management practices.

Arguing the politics of war is a minefield well beyond the reach of this short missive. Still, it is important to acknowledge that military organizations have been delegated as the unexpected caretakers of some of most environmentally relevant lands in the world, including those in Canada. As advisors to the Canadian Department of National Defense, my colleagues and I honor our nation and its natural heritage by seeking to improve our readiness to take on this task in the 21st century with increased intelligence and effectiveness.

Delaney Boyd is a Ph.D. candidate in the Faculty of Environmental Design at the University of Calgary in Calgary, Alberta, Canada. She has served as a biologist and advisor for the Canadian Department of National Defence (DND).

Read Part One of the series: How to keep the American Southwest from drying up altogether