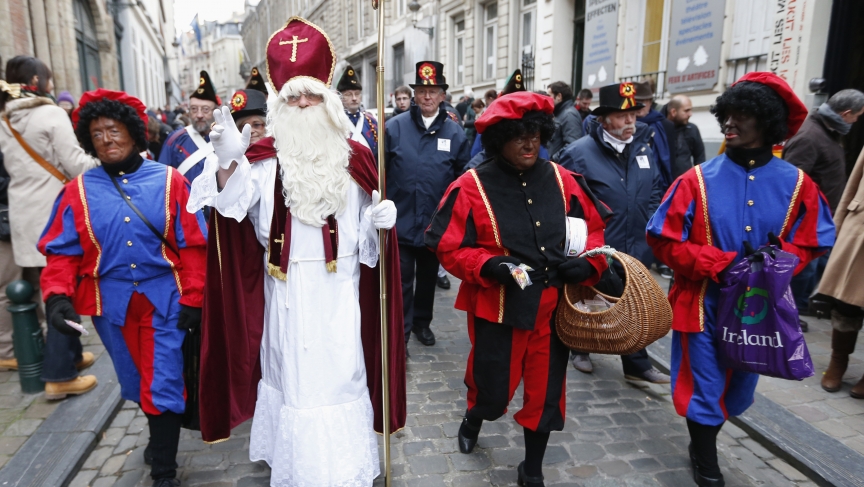 Saint Nicholas (2nd L) is escorted by his three assistants called "Zwarte Piet" (Black Pete) during a traditional parade in central Brussels December 1, 2012. The Netherlands and Belgium are two countries that pride themselves on progressive laws and open societies, but critics say they are stuck in the dark ages when it comes to depictions of Santa Claus and his helpers.

The Dutch traditionally launch the holiday season with a national festival where Santa Claus arrives in the European country to give presents to all the good boys and girls.

He's accompanied by a helper, known as Black Pete, who is portrayed by a white man wearing blackface. And though blackface has been largely excised from all other aspects of polite society, it endures in the Netherlands — hailed as an integral part of Dutch culture and history.

But that history is being challenged in a country that's becoming increasingly diverse. Reuters reports that, at this year's opening festivities in the Dutch town of Gouda, dozens of protesters clashed with police and participants in a bid to put an end to what they argue is a racist tradition. At least 60 people were arrested. PRI's The World has the story behind the Black Pete tradition.

His argument that Muslim explorers arrived some 300 years before Christopher Columbus is just the latest in a series of competing claims as to who were the first Europeans to sail to the Americas — whether it was the Vikings, Muslims or Columbus and his shipmates. Of course, all these claims largely ignore that a well-developed civilization was already on the continent.

But setting that larger issue aside, Erdogan presented as proof of his claim a passage from a journal by Columbus saying he spotted "a mosque on a hill on the Cuban coast." Most historians believe Columbus was comparing the natural features of the mountain to a mosque. Still, some make similar claims to Erdogan, including one who claims West African Muslims sailed the Mississippi River after arriving in the Gulf of Mexico in 1312. According to Al Jazeera, Erdogan offered to build a mosque on the hill where Columbus first "saw" one.

Ever wonder why there was an English-speaking Native American waiting for the Pilgrims?

If you've heard the traditional Thanksgiving story, you've most likely know the crucial role a Native American named Squanto played in bringing Pilgrims and Native Americans together to share a meal — and in keeping the Pilgrims from starving during their first years in North America. But have you ever wondered how Squanto came to speak English?

PRI's The World went to Plymouth, Massachusetts, where the Pilgrims first landed, to tour a new exhibit that looks at life through Squanto's eyes. According to the exhibit, Squanto could speak English because he was kidnapped by slave traders years before and forced to sail to Europe and on other European expeditions before eventually escaping and making his way back to his native village, near where the Pilgrims landed. The new exhibit, organized and researched by Native Americans, is a first look at the other side of the Thanksgiving story.

China's air pollution is hazardous to its citizens — and embarrassing to its leaders. So when Beijing recently hosted the Asia-Pacific Economic Cooperation (APEC) summit of world leaders, it went to great lengths to turn the skies over the city from gray to blue.

Across a half dozen of China's largest cities, officials passed special regulations and held inspections affecting tens of thousands of factories, construction sites and gas stations. Special rules took millions of cars off of the country's highways. And with all that work, Beijing managed to drive its air pollution to, well, slightly less embarrassing levels in time to greet the leaders.

According to a report from the South China Morning Post, pollution levels zoomed back upward as soon as the conference left town. US Embassy data indicated that the air pollution levels remained very unhealthy throughout the conference, though they were largely not in the hazardous category. Most surprising of all?  The government-run China Environmental News actually published details of China's extensive efforts to reduce its pollution for the conference.

No one is sure when, exactly, George Washington Carver was born. It is believed that this year or next would have been his 150th birthday. So in his honor, scientists gathered at Tuskegee University in Alabama earlier this year to celebrate a man who left an incredible legacy to education and agriculture in the United States.

PRI's Science Friday talked about Carver's impact with Cathie Woteki, a scientist and undersecretary at the US Department of Agriculture. She credited Carver with developing crop-rotation techniques that remain popular today, as well as popularizing peanut farming. Still, his impact goes far beyond that, including developing the agricultural extension service model, which many of America's colleges and universities continue to provideas a service to farmers to this day.

The best optical illusions to bend your eyes and blow your mind – in pictures http://t.co/XblF11ohmn pic.twitter.com/Ke0JI6R37m

Sky watchers can catch one of the natural world's best fireworks shows tonight, when the Leonid meteor shower reaches this year's peak. Though it won't be like the 1833 edition, when the skies were filled with as many as 100,000 meteors per hour, tonight's storm is expected to produce a more reasonable 10 to 15 meteors each hour. If you live in a city where seeing the sky is tough, or if it's too cold for you to get out, the Slooh Community Observatory will have a live feed all night long. Best viewing is between midnight and dawn local time, according to Wired.