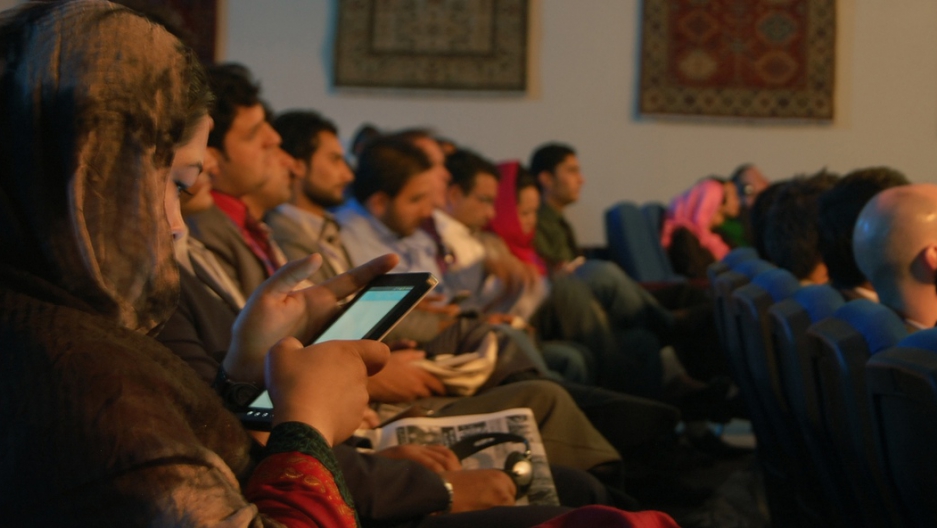 An Afghan looks at her tablet during Afghanistan's Social Media Summit in Kabul in September 2013.
Credit: Daud Yardost
Share

KABUL, Afghanistan — It all started with a short article on a popular Afghan news website. Khaama Press reported that two members of the Taliban had been caught in a rather compromising position in the northern province of Badakhshan.

According to the account earlier this month, the suspects were found in flagrante delicto with a cow. The alleged offenders were soundly beaten by local villagers, and then fled.

That might — and probably should — have been the end of it.

But social media had other ideas. For a solid 48 hours, Twitter and Facebook crowds were consumed with tasteless jokes and semi-offensive cartoons at the expense of the Taliban and the unfortunate bovine.

One tweeter put this armed bull into the fray, apparently to avenge the honor of its womenfolk.

The Khaama website is known to alternate serious news with some of the more arcane tidbits floating in the ether. GlobalPost, regrettably, could not independently verify the cow sex report. But in the cyber tsunami that followed, the story became true almost by default.

The incident was a testament to the growing power of social media in an environment where very few of the conditions for a vibrant digital universe actually exist.

This is a country with one of the world’s lowest literacy rates, where more than half the people live below the poverty line. It has also been at war for almost four decades.

And yet today Afghans of all sorts, from educated city youths to rural mullahs to opium poppy farmers to the Taliban, are hitting social media with a vengeance.

“Facebook really shapes public perception these days,” said Abaceen Nasimi, the 32-year-old head of Duran Research and Analysis, a Kabul-based consulting company. “People of my age and in my circles use it for political debates, for discussion of issues.”

The effects reach far beyond Kabul.

“After the mudslides in Badakhshan this spring we used social media to raise money for the victims. We use it for advocacy. It is an extremely important force,” Nasimi added.

They’re even catching the social craze in southern Helmand province, a world opium-poppy hub and a powerful center of the Taliban insurgency.

“We depend a lot on social media,” said Zainullah Stanekzai, head of the Helmand Independent Journalists Association. “Journalists get many leads from Facebook, for example.”

An official hoping to expose corruption can create a fake account and post an entry about wrongdoing in a government department, he added.

“It is usually enough for journalists to catch the scent and find the story. We’ve had a lot of success with this,” Stanekzai said.

Journalists in the south also use social media to keep in touch with the insurgency. Many of the Taliban are avid Facebook users, and Taliban spokesperson Zabiullah Mujahed has his own Twitter account, with 6,850 followers.

This got him in hot water last month, when he accidentally geotagged his location in Pakistan. Since he’s supposed to be in hiding, this caused a stir, and prompted the angry Talib to insist the tag was an enemy plot and, in fact, he’d been in Afghanistan all along.

Helmand’s Stanekzai grumbles that social media has a dark side.

“A lot of people use it in a bad way,” he said. “They backbite and stir things up. Sometimes I think the negative outweighs the positive.”

Stanekzai is not alone.

During Afghanistan’s very messy presidential election campaign this spring, Facebook and Twitter users were spreading a level of vitriol that many found alarming. Some Afghan parliamentarians even called for a temporary ban on social media, but none was ever enacted.

"Social media can be a negative phenomenon anywhere in the world. In Afghanistan it is a reflection of the society."

“Banning Facebook is not the solution,” said Ahmad Shuja, co-founder of Impassion Afghanistan, the country’s first digital media agency. “Social media can be a negative phenomenon anywhere in the world. In Afghanistan it is a reflection of the society, a mirror image of what is happening in Kabul and Kandahar.”

Only 5.9 percent of the population uses the internet, which is fewer than 2 million people, according to United Nations data, although other studies estimate a higher rate. Of those, of course, the vast majority are in the cities, where fiber optics have made cyberspace fairly affordable. Three years ago an acceptable rate of internet speed in Kabul would run close to $700 per month; now consumers can obtain the same connection quality for about $50.

But almost everyone has a cellphone: According to the Information and Culture Ministry, more than 90 percent of Afghans now have access to telecoms services, with 20 million of them mobile users.

The United States has tried to capitalize on this. In 2011, the State Department awarded a contract ultimately totaling some $5.7 million to UStronics, a US-based company, that used the startup funding to develop Paywast, the country’s first social media network. Based on mobile messaging (SMS), Paywast gives those without internet a way to stay in touch.

“It was a way to leverage basic technology to reach out to the masses,” Jes Kaliebe Petersen, co-founder of Paywast, told GlobalPost.

In April, Petersen told The New York Times Paywast had no political agenda: no connection to the US development agency's reported “Cuban Twitter” fiasco.

The US government paid for a huge chunk of message time, and for about a year young Afghans were texting each other like crazy. “At one point we had close to 30 percent of all SMS traffic in the country,” Petersen said. But when the money ran out, so did many of the subscribers.

Paywast still boasts 1.6 million users, but most of them are not engaging in SMS group chats, as had been the original vision.

Now Paywast markets itself to TV and radio, NGOs and Afghan government ministries seeking to get into “mobile governance.” People now use it for things like voting for their favorite singer on Afghan Star, renewing identity cards or getting help to internally displaced people.

Now smartphones are all the rage here, too. Voters busted them out with glee especially during the elections to choose President Hamid Karzai’s successor.

“There is little doubt that social media contributed to the euphoria during the first round of the elections,” Impassion’s Shuja said. “All of these selfies of people with ink-stained fingers encouraged others to go out and vote.”

Impassion organized Afghanistan’s first social media summit last year; it was such a success that it was expanded for 2014, with sponsorship from a variety of groups, including the US Embassy.

Shuja, who himself is gaining a pretty solid Twitter following, acknowledges that the digital world is not without its drawbacks.

“Social media is a particularly easy way to be more bigoted, due to the anonymity of the internet,” he said.

The answer, he insisted, is a legal framework to punish bullying and harassment online.

“The best way to combat the situation is to institute cyber laws,” Shuja said.

Social media here is still in its infancy, but it is growing up fast. Shuja maintains that the formal statistics are misleading.

“In five years the numbers will be exponentially higher, due to the increasing urbanization of the society,” he said. “There will be a big boom. We should look to the future, look at where we are headed.”

Social media can harness and channel the frustrations of Afghans who have been nursing grievances for generations.

“The development of the media in Afghanistan has been fantastic, but it has been one-sided,” Shuja said. “There has been no cross-talk, no echo in the society. Social media can allow this to happen. Afghans can become a part of this great, boisterous debate.”