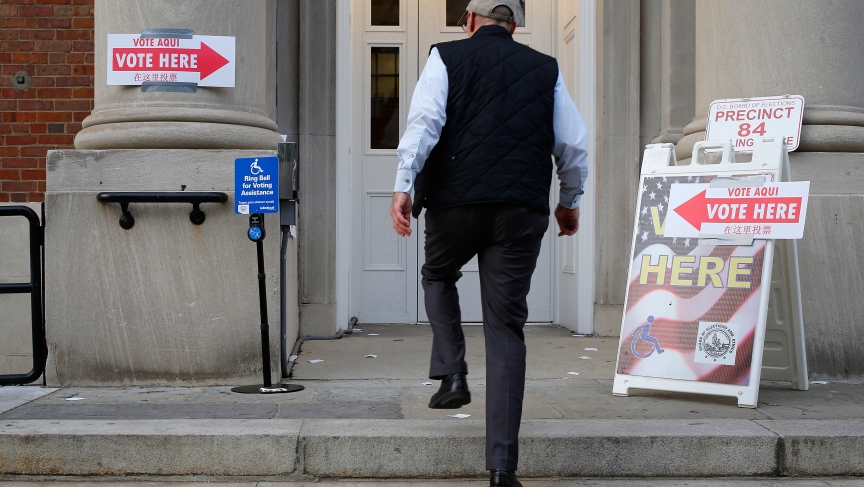 A voter enters the polling place on Election Day at Stuart-Hobson Middle School in Washington, DC, on November 4, 2014.

Voters made history during the 2014 midterm elections, though not in a good way: Just 36.4 percent of eligible voters came out to cast their ballots in the midterms, the lowest voter turnout in 70 years.

There are many reasons for the low turnout, but Seth Flaxman, the co-founder of Democracy Works, believes one major reason is the voting process itself. Voting should be "as easy as renting a DVD from Netflix," he argues. Instead, it's still stuck centuries in the past.

"We have a long tradition in the US of making voting fit the way we live," Flaxman says. "The problem is that it fits the way we lived in the 1700s.”

Take Election Day itself: Back in the early days of the United States, many Americans went to church on Sundays, which is one reason why polls weren't open on the weekends. Tuesdays fit the campaign style of the time and the agricultural lives of most voters.

“On Tuesday morning, the two candidates would line up in the square and then, one at a time, you’d shake the hand of the candidate you supported in front of everyone,” Flaxman says. “You’d be back home in time for market day on Wednesday."

And that's far from the only deterrent. The US Census Bureau asks people why they choose to not to vote, and Flaxman says they cite "everything you can imagine: registration, inconvenient polling place, had to work, weather, transportation problems ... We can do a lot to address those problems without leislative changes — we just need to work on the technology."

Flaxman is hoping to tackle some of these issues with TurboVote, an online platform he's developing to help voters eliminate many of those hurdles.

“Someone should be able to sign up once and get help with everything they need to stay registered and vote in all of their elections for the rest of their life,” he says. “That’s what we’re trying to achieve.”

TurboVote will actually do a lot of the leg work for voters — the site will even fill out forms for people will all of their pertinent information. Completed voter registration and Board of Election forms can then be emailed to a user or delivered by a postal worker with a pre-addressed envelope.

“We’ll also send text messages and email reminders to make sure you meet all of your deadlines,” Flaxman says. “We’ll remind you when to send in your vote-by-mail application or your ballot. If you’re voting in person, we’ll send you a reminder that says, ‘Tomorrow is your primary election, here’s where your polling place is.’”

No technology can fix widspread dissatisfaction with candidates and politicians. But Flaxman argues that if it becomes easier for people to vote, then more people will come out to the polls — something that will make politicians care more about what the people are saying.

"Politicians are ultimately only going to represent the people who vote,” he says. “If only 30 to 40 percent of people are voting, those are the only people politicians will worry about serving. If we can increase participation by those 50 percent of people for whom process is the main part of the issue, we’ll already have changed the game significantly.”