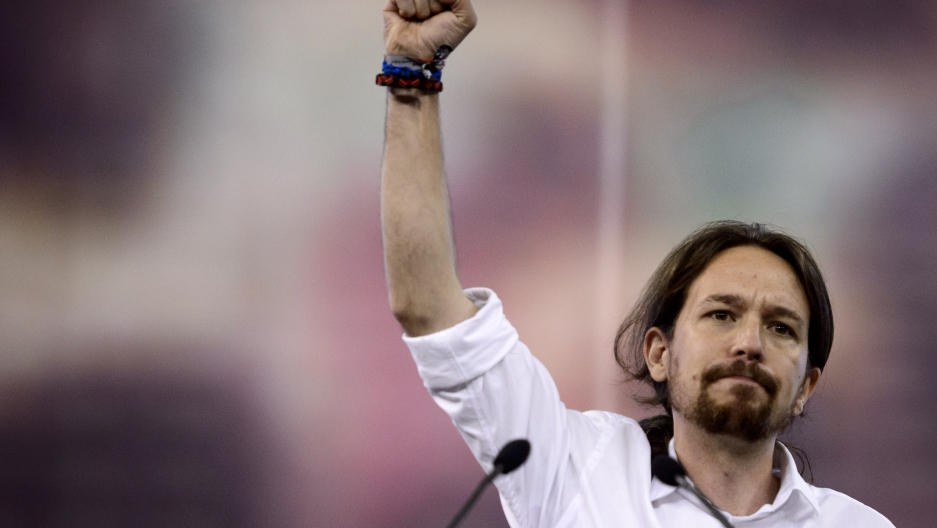 LISBON, Portugal — Judging from the official portraits, the last man to rule Spain while sporting a ponytail was King Carlos IV, who stepped down in 1808.

Now there's a growing nervousness among Europe's political and financial establishment that "la coleta" may be poised to make a comeback in Madrid's corridors of power.

Iglesias fronts a radical left-wing party called Podemos, or We Can, that's threatening to rock the foundations of Spanish politics and sending shockwaves around Europe.

"The best moments in the history of our continent were forged by the revolutions, made by the people whose rights mean more than kings, gods, nobles or grand landowners," Iglesias proclaimed during his maiden speech to the European Parliament in June.

"Europe's greatest heritage is the will of its people to be free, to be nobody's servants,” he said. “That's what democracy means."

Iglesias is a leading light among a new generation of European leftist leaders riding a wave of voter dissatisfaction with the political mainstream, which has been discredited in the eyes of many voters by their handling of the euro zone economic crisis.

While the rise of parties on the radical right — including the French National Front, the United Kingdom Independence Party and the Dutch Freedom Party — has captured headlines, far-left parties have also been making spectacular gains.

Polls show the Coalition of the Radical Left, or SYRIZA, is now Greece's most popular party. A survey last month gave it 35 percent of support — more than the combined total of the conservative and socialist parties that have ruled the country since democracy was restored in 1974.

In Ireland, a poll last week showed the radical Sinn Fein (Ourselves) Party is now the country's most popular despite the country's recent re-emergence as the European Union's fastest-growing economy.

Even in Germany, the far left is making gains.

Die Linke, or The Left, which grew out of the old East German Communist Party, is set to take control of one of Germany's regional states for the first time. The party's 36-year-old co-leader Katja Kipping made international headlines this summer proposing the government give all poor families vouchers worth $625 to pay for vacations.

Germany may be able to fuel such schemes, but elsewhere, fear of far-left profligacy is spooking financial markets. Speculation last month that Greece would call early elections next year together with the prospect of a SYRIZA victory sent stocks crashing, bond yields soaring and revived fears of Greek exit from the euro currency zone.

That's despite a decision by SYRIZA's leader, 40-year-old Alexis Tsipras, to tone down some of his firebrand rhetoric to talk about renegotiating rather than tearing up Greece’s bailout agreement with its creditors.

"The great change has begun," Tsipras told the parliament in Athens recently. "The old is on its way out. The new is coming, No one can stop it."

In Spain, the rise of Podemos has been even more remarkable. The party grew out of the indignados street protests that erupted at the height of the economic crisis in 2011. Founded only in January, it captured five seats in Spain's elections to the European Parliament in May.

A poll in the Madrid daily El Pais earlier this month put Iglesias's party in first place with 27.7 percent of the vote — ahead of the governing conservatives and the main center-left opposition, who have dominated Spanish politics for four decades.

Podemos's rise has been boosted by a spate of corruption scandals smearing the pillars of Spain's establishment, including the royal family, business leaders and dozens of mainstream politicians.

The country’s economic woes been a boon for the new left. Although the economy has made a hesitant return to growth in recent months, millions are trapped in unemployment. The young are hit hardest: Spain's jobless rate for the under-25s stands at 54 percent, the EU’s highest.

"The crafty character nicknamed Littlefinger reminds us that we live in a world where some men are lucky to be born in the right family, while others must seek their own way," he wrote, alongside a photo of the series' blond heroine stroking a diminutive dragon.

Critics say Podemos — like its far-left partners across Europe — is stronger on style than substance, particularly when it comes to credible economic policies.

The radical left shares much of the far right's analysis on the causes of Europe's economic woes, placing the blame on EU bureaucrats and international bankers.

"When Podemos is in government, JP Morgan is not going to be able to pick up the phone and tell us what to do," Iglesias told the TV channel Cuatro in an interview on Wednesday. "The investment banks that buy and speculate with Spain's debt are not going to decide our economic policy... the people vote for governments, not investment banks."

Although the party is still working up its economic program, proposed policies include a selective default on Spain's national debt, state takeovers of "strategic" companies, lowering the retirement age to 50 and taxes on the wealthy that would fund a universal basic income for all families.

He and other Podemos members once sat on the board of a foundation that received $4.6 million from the Chavez government over 10 years up to 2012, according to an El Pais report in June. Podemos has acknowledged that Iglesias and the others also once acted as advisors to Latin American countries, but denies the party receives any foreign government funding.

Even if Podemos emerges as the biggest winner in Spanish general elections due next year, polls put it well short of an overall majority. That means it will have to find coalition partners among the mainstream parties it reviles — or that they will have to join together to keep Podemos out of power

More from GlobalPost: This week in lonely battles: David Cameron vs. the EU

The economic crisis has thrown bitter rivals from the mainstream left and right into uneasy coalitions in Greece and Italy, not to mention Germany's government, where Angela Merkel's center-right party shares power with Social Democratic partners.

But many warn that such "grand coalitions" ultimately boost support for radical forces by reinforcing voter perceptions that parties on the far left and right are the only alternative.

"A grand coalition would be harmful for our democracy," warned Pedro Sanchez, new leader of the center-left Socialist Party, last week.

A 42-year-old who also favors jeans and open shirts — but no ponytail — Sanchez was picked as party leader in July in the hope of reviving the party's fortunes and holding off the threat from Iglesias.