We've all got creative aspirations that we've put aside --- that novel in the drawer, half-completed album, or sketchbook gathering dust --- in the pursuit of practical goals. At the end of last year, we askedfor volunteers to make creative New Year's resolutions, and as 2014 comes to a close, we're checking in with our resolution-makers. 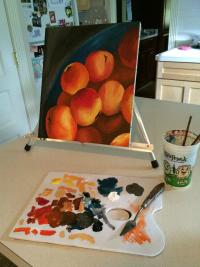 Adrienne Ognibeneof Maryland set a goal of making six paintings and 12 charcoal drawings by the end of the year. So far, she's finished six pieces in total, which isn't bad considering that she also switched jobs, and her studio is in the high-traffic zone of the family kitchen. She tells Kurt Andersen that she goes back and forth on whether she thinks her work is good. "Some of the things I like a whole lot, and some of the things I've done I'm going 'Um, that's not great,'" she says. "I think some of it's the time pressure. I can tell when I rush things and I don't like it as well." 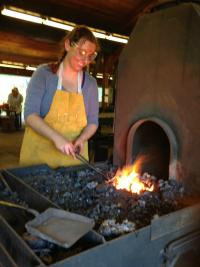 But she has found that the practice has improved her painting and drawing technique. "I think I'm getting better at it," she says. And returning to visual art has inspired her to try new outlets for her creativity: she took a course in blacksmithing. "I always thought it sounded really cool and a lot of fun," she says. "I like playing with fire."

But working in the kitchen has proven more problematic. "I have to be very careful" not to get paint in the food, she says. "It's definitely easier in the warmer months when I can go outside and have space. It might become more of a seasonal activity for me."