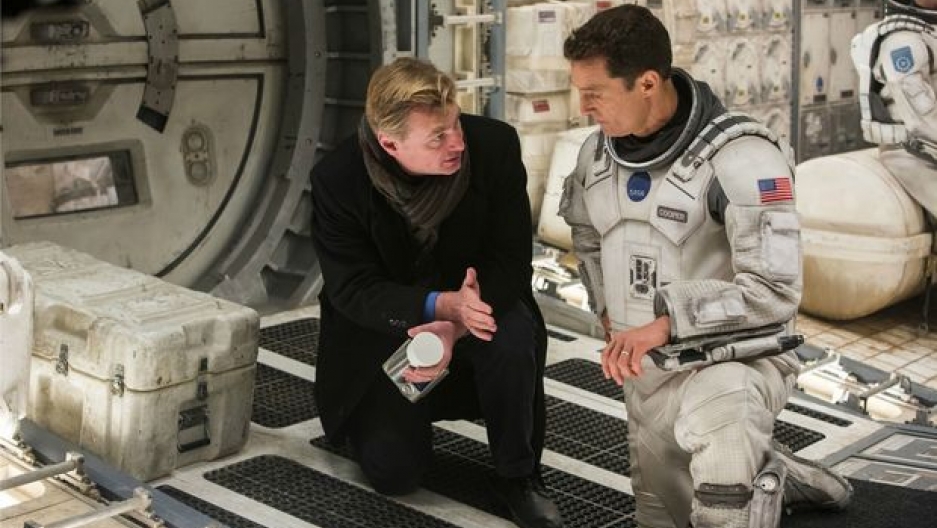 Christopher Nolan with Matthew McConaughey on the set of Interstellar
Credit:

In Christopher Nolan's latest film, Interstellar, a group of space explorers — among them a devoted, single father — heads off to find a new home for humanity as our near-future Earth turns into a doomed dustbowl.

“Somebody I was talking to about the film put it very politely,” Nolan recalls. “They said, ‘The film is in conversation with 2001: A Space Odyssey’ — which I took to be a polite version of ‘ripping it off.’ But I [couldn’t] make Interstellar as if 2001 didn’t exist. I live in a world where it exists and it’s my chief inspiration for making the film. So, I really tried to simply be inspired by it and try to add something.”

Interstellar differs from many of Nolan’s previous films in that it is so grounded in human relationships and the peculiar bonds and conflicts within families, even while it explores time and space and has plenty of action.

“The thing that drew me to the project was the contrast between a very intimate story of a father and his children and the cosmic scale of the test of that relationship — in this case, man leaving the Earth to live somewhere else, finding our place in the universe,” Nolan says. “Seeing that [contrast] by looking over the shoulder of a relatable protagonist and his family seemed brilliant and really fascinating to me.”

Being the father of four children was one reason he gravitated towards this material, Nolan says. “My oldest child is a daughter and the relationship between Cooper, Matthew McConaughey’s character, and his daughter is a very important thing in the film,” he explains. “I think as I get older and as I make more films, I find that it’s the emotional connection with the stories that keeps me obsessively interested in the projects.”

Though Interstellar is set in an unspecified era in the future, its vision of Earth is still early 21st-century — physically, nothing is very different. Nolan says he and his artistic designer, Nathan Crowley, made this decision early on.

“We didn’t want the appearance of things to be guessed at,” he says. “We’re asking so much of the audience in terms of absorbing a set of ideas, going on a big journey. I wanted everything to be relatable.”

Nolan’s movies tend to unfold in non-linear narratives. Memento, Inception, Interstellar — all of them explore in some way the subjectivity of time and the malleability of its direction. The films often seem to present a puzzle the viewer needs to solve, but Nolan encourages the audience to enjoy them as entertainment first and foremost.

“What I found with my films is if people just sort of sit back, relax and try to enjoy them as a ride, they understand them much better than people who approach them like they’re some sort of crossword puzzle to be solved,” he says. Even so, Nolan adds, he constructs his films knowing they are likely to be veiwed more than once.

Plus, he says, he has years to make his films, whereas an audience gets only two-and-a-half or three hours to watch it. “So I feel a burden to be putting layers in — to be putting in things that could enhance a second or a third viewing, if you’re interested. [But] obviously, that first viewing has to be everything — otherwise you aren’t bothered to take a closer look.”

Interestingly, while Nolan’s films often deal with technology, he does not have an email address or a smartphone; he prefers shooting on location rather than using a green screen; and he still shoots his movies on film. In an increasingly digitally-produced medium, he is by far the exception.

“I don’t regret the transition [to digital], I deny that it’s even taken place. I live in massive denial,” he says with a laugh. “I shoot on film because it’s technically the best medium. So I carry on working that way until something better comes along.”

He points out that most technological advancements over the last couple of decades have been “very much to do with what’s in our pockets or what’s in the corner of our living rooms or how we communicate.” He thinks it would be interesting to see those advancements "turn outwards again."

“When I was a kid, people were looking off the planet,” he says. “They were asking, ‘How can we use technology to explore our place in the universe?’ I think one of the themes of Interstellar is that maybe we should get back to that. Wouldn’t that be exciting?”