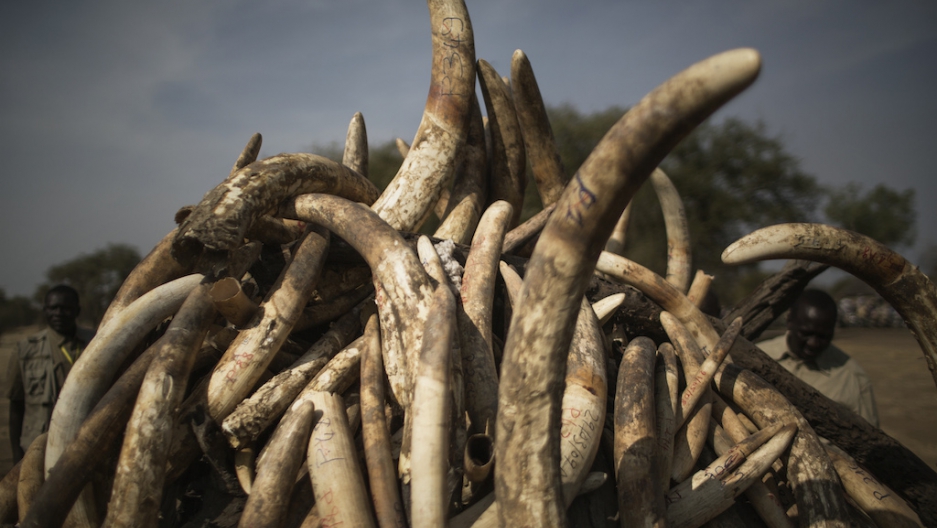 A pyre on which over a thousand kilos of elephant tusks will be incinerated at the Zakouma National Park, Chad's oldest natural park, in Goz Djarat.
Credit: MARCO LONGARI
Share

NAIROBI, Kenya — Hollywood director Kathryn Bigelow has made a 3-minute animated short called "Last Days," telling the story of ivory poaching and the threat it poses to elephants. The film begins in the markets of Beijing and New York, then rewinds to Africa, where elephants are being hunted and killed at an astonishing rate.

It is mostly a 2-D animation but also features footage from last year’s Westgate Mall attack in Nairobi because, according to Bigelow’s film, Al Shabaab, the Somalia-based Al Qaeda group responsible for the attack, earns money from poaching elephants.

Terrorists killing elephants to fund their atrocities is a powerful, troubling story that deftly taps two hot-button issues linking them in one awful, unified narrative. No wonder it grabs attention.

But is it true?

At first glance the weight of evidence for poaching funding terrorism appears overwhelming.

Former Secretary of State Hillary Clinton talks about it on behalf of the Clinton Foundation and Clinton Global Initiative; so does her former British counterpart William Hague and an array of US legislators.

Kenya’s president Uhuru Kenyatta linked ivory and the Westgate attack in a Wall Street Journal op-ed. The former head of the Kenya Wildlife Service and the UN Office on Drugs and Crime have highlighted Shabaab’s role in elephant poaching, while many of the world’s leading elephant protection advocates and charities eagerly repeat the allegations.

Unsurprisingly, the world’s press has plastered the Shabaab-ivory story across their pages and websites, and the story gained new momentum in the wake of the 2013 Westgate attack.

“Al Shabaab mounted September’s attack on Nairobi’s Westgate shopping mall in which more than 70 people died. By some estimates, just ten tusks would have been enough to finance that operation,” said Britain’s Daily Mail.

The UK’s Independent reported on the issue as part of its campaign to protect elephants. The New Yorker has made passing reference to the link as if it were accepted fact. Slate and New Scientist have both posted on the subject. The Financial Times has expanded the allegations to include rhino poaching. We here at GlobalPost have also reported on the issue.

The trouble is that all of the above reference the same study published online by a US-registered nonprofit called the Elephant Action League (EAL) in early 2013.

"Africa’s White Gold of Jihad: al-Shabaab and Conflict Ivory" outlines findings from what the EAL describes as an 18-month undercover investigation and asserts that Shabaab earns “up to 40 percent” of its income from poaching and trading illegal ivory.

“According to a source within the militant group, between one to three tons of ivory, fetching a price of roughly US$200 per kilo, pass through the ports in southern Somalia every month. A quick calculation puts Shabaab’s monthly income from ivory at between US$200,000 and US$600,000,” the report states.

The citing of a single, unnamed source and the scale of the claim has led some to question the veracity of the investigation on which media reports, advocacy, fund-raising and increasingly policy is based.

Nir Kalron, chief executive of Tel Aviv-based Maisha Consulting, conducted the investigation back in 2010. He said the version published by EAL is “a journalistic summary” and insisted that his sources cited in the report were reliable and cross-referenced. He added that he has video and photographic evidence to back the thesis that Shabaab is involved in the ivory trade, if not the figures.

“You could argue that that had we put a more deep disclaimer on that specific piece of evidence, of one to three tons a month saying ‘an unconfirmed source claimed,’ then we wouldn’t be in this debate,” said Kalron, “but the bottom line is confirmed 150 percent and we stand 200 percent behind our sources and our work.”

A bull Elephant forrages in the evening light on August 7, 2014 at the Ol Jogi rhino sanctuary, in the Laikipia county, approximately 300 kilometres north of the Kenyan capital, Nairobi.

In the days after the Westgate attack Kalron and the EAL’s executive director Andrea Crosta, together with author Laurel Neme, wrote op-pds in the LA Times and NatGeo. Similar arguments were published in the opinion pages of The New York Times, Washington Post and elsewhere.

Yet there is a great degree of skepticism among others who have investigated the link, and come up with nothing.

“It’s total nonsense,” said Christian Nelleman, one of the authors of "The Environmental Crime Crisis" published this year by global anti-crime agency Interpol and the UN Environment Programme (UNEP).

Nelleman’s research failed to find any evidence to back claims that Shabaab was shipping an amount of ivory equivalent to “3,600 elephants per year … or nearly all ivory from killed elephants from west, central and eastern Africa.” The report concluded that EAL’s findings were “highly unreliable.”

The EAL’s Crosta bristled at the criticism. He said that Interpol and UNEP “always criticized our research and yet they were the only two organizations that never bothered to get in touch with us to ask [for] more info.”

“The current elephant crisis happened under UNEP and Interpol's watch, so my suggestion [to them] is to be more humble and collaborative,” he said.

But it is not just Interpol and UNEP who have raised questions about the investigation.

The leading authority on the illegal wildlife trade is monitoring network TRAFFIC. The organization’s elephant and rhino program coordinator Tom Milliken said of the report: “TRAFFIC has never been able to verify the claim that 40 percent of al-Shabaab’s revenues is related to ivory trade.”

“Operationally, Al Shabaab lies well beyond most extant large elephant populations so it is difficult to see how they could possibly sustain ivory trade on the scale that EAL claim,” said Milliken.

“Occasional, opportunistic trafficking in small volumes of ivory is a possibility, but not sustained large-scale involvement in the trade,” he said.

Milliken runs the Elephant Trade Information System for CITES (the Convention on International Trade in Endangered Species), which has been gathering information on ivory seizures since 1989. In that database, “Somalia is noticeably absent from any hint of trade,” he said. Somalia has only been implicated in 10 seizures totaling a tiny 39 kgs in 25 years, most recently in 2003, before Shabaab formed.

Nelleman agreed that the possibility some people linked to Shabaab (or, just some Somalis) may have some involvement in the illegal ivory trade could not be ruled out, but argued that it was a “peripheral” activity at best. For Shabaab there are less risky, highly lucrative and much closer sources of income, including charcoal, taxation and extortion.

“The whole issue of terrorists getting income from poaching is vastly exaggerated,” said Nelleman.

Somali men carry weapons during a demonstration organized by the islamist Al-Shabaab group which is fighting the Somali government in Suqa Holaha neighborhood of Mogadishu, on July 5, 2010.

The UN Monitoring Group for Somalia and Eritrea, investigators tasked with uncovering Shabaab’s sources of finance, has never found evidence of ivory trading in any of its reports.

Matt Bryden, director of Nairobi-based Sahan Research, ran the UN Monitoring Group for four years until 2012. “We saw nothing and we heard nothing about ivory, and that’s strange because we were looking at the exact same smuggling routes,” he said.

Bryden said a more likely scenario might be one in which Somali poachers, who have operated in Kenya for years, smuggle their contraband through Shabaab territory paying taxes along the way. He said this would represent a barely significant source of funding for the terrorist group.

Despite the paucity of evidence, Shabaab is routinely lumped in with the Lord’s Resistance Army (LRA) and Sudan’s janjaweed militias, both of which have a well-documented involvement in poaching. Recently, Nigeria-based terror group Boko Haram has also been slipped into the terrorism-ivory discussion, though without apparent evidence.

There is no doubt Africa’s poaching crisis needs addressing. Those responsible are sophisticated, well-resourced, well-equipped and well-armed criminal gangs that pose a very real threat to security in the often-poor countries where elephants are still found.

Shifting attention toward the alleged involvement of terrorists has seemed to distract from the real and likely much bigger poaching threats posed by criminal gangs and, to a lesser extent, armed militias. Yet environmental activists have eagerly repeated the terrorism allegations. After all, it’s a good story: it grabs attention and therefore funds.

At a panel discussion after Bigelow’s film was shown at the New York Film Festival in September, the "Point Break" and "Zero Dark Thirty" director was joined by, among others, the chief executive of WildAid, an animal charity that will help distribute the film. “It’s not about the facts,” said Peter Knights, “it’s about the emotion.”