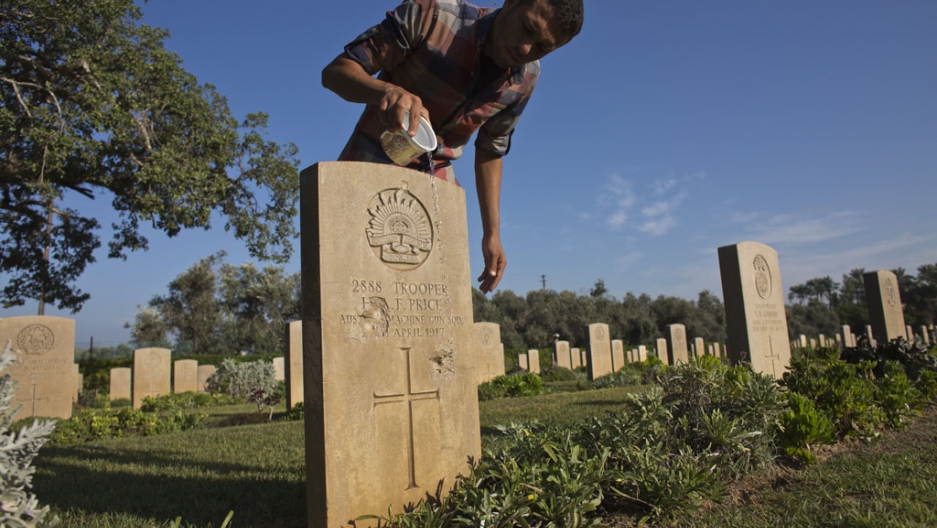 Editor’s note: This post is part of a Special Report called “The Eleventh Hour: Unlearned lessons of World War I” launching in full this week, nearly a century after the Armistice Day of Nov. 11, 1918 that ended the war.

DEIR AL BALAH, Gaza — For decades Palestinian Mohammed al-Wajar has raised his family in the shadow of World War I, while trying to protect them from the violence of the Israel-Palestine conflict.

Just at the edge of al-Wajar’s home sits the Deir al Balah Commonwealth Cemetery, in which 724 fallen WWI soldiers are buried.

Their limestone headstones glisten with the sun's first morning rays. Even the sound of birds manage to somehow neutralize the buzzing of Israeli military drones flying overhead and the crackling noise of old generators, often the only source of electrical power for Gaza’s population.

In the late afternoon, a sprinkler system pops up and waters the perfectly groomed grass, despite the shortages that leave so many in Gaza without running water and electricity for hours.

“I take care of each of these graves as though they were my children,” said al-Wajar, 57, who has worked for 28 years as a gardener and is paid a monthly salary of less than $300 by the British Commonwealth Commission.

Al-Wajar’s parents used to live in the village of Yifne—today a town in Israel called Yavne—but they fled to Gaza in 1948 during Israel’s War of Independence, along with the thousands of other Palestinians. According to the United Nations Relief and Works Agency, refugees in Gaza now number 1.2 million.

Al-Wajar’s son Khalil, 27, unemployed and divorced, helps him scrub the dirt and algae off of the headstones and clean off the occasional snail that manages to nestle itself inside an engraved cross.

Some of the headstones have been damaged by stray bullets during the battles between the Israeli military and Palestinian fighters. Some look as though the conflict has left them wounded — standing but battered, like they may not survive even one more battle.

By nightfall, the headstones lose their golden color and turn a shade of grey, like the mosques, buildings, and homes in Gaza that lay in a maze of twisted metal and rubble.

Al-Wajar’s family has been fortunate not to have lost any family members or their home during the years of fighting, but two of Khalil’s friends were killed last summer by shelling during the 50-day war between Israel and the Hamas-controlled Gaza Strip.

“I have lost hope for everything here, and in both the Israeli and Palestinian governments. We do not know whom to support and I would not bother to even vote in another election,” said Khalil. “I just want to live in peace and have a job and one day be able to feed my children.”

When asked how he thinks World War I has impacted his life, Khalil leaned against a tree in the yard of his family's home, only steps away from the cemetery headstones and said, “If the divisions of the Arab countries did not happen in the past, we could live in one country with peace and away from divisions.”

This post is part of "The Eleventh Hour." See the more the series:

Part One: Why World War I still matters, 100 years after it began