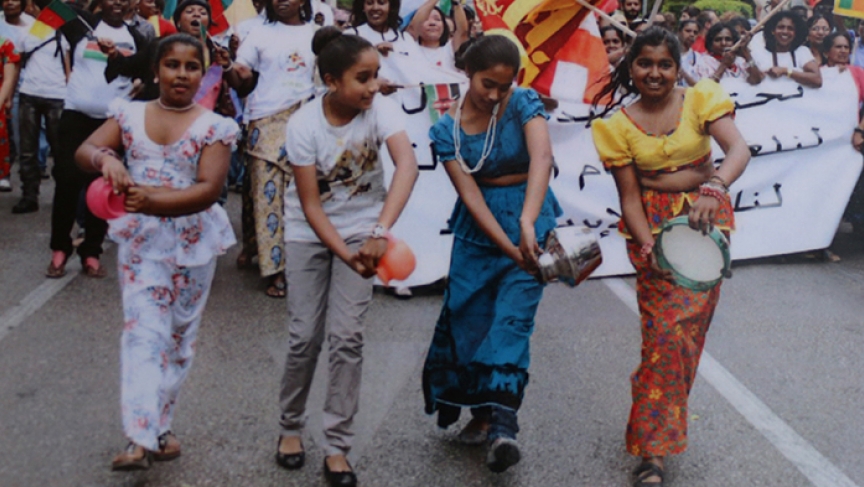 Rainey takes part in a Sri Lankan parade in Lebanon.

Rainey is 13, her hair is tied back in a long ponytail. One of her favorite foods is tabbouleh, served on top of rice. She was born in Lebanon and she has grown up here, which explains her love of tabbouleh, a Lebanese salad made with parsley and bulgur wheat. But the Lebanese would never eat it with rice.

“My family is from Sri Lanka,” she explains. In Sri Lanka, everything is eaten with rice.

Rainey’s parents came to Lebanon from Sri Lanka 20 years ago to get away from their country’s civil war. In fact, Lebanon has almost a quarter million migrant workers who tend to be employed as maids, trash collectors and gas station attendants. They come from countries across Asia and Africa, often to escape economic and political hardship.

At their home in the Beirut neighborhood of Sed El Bouchrieh, Rainey’s parents speak Sinhala with her. And while they have worked here as cleaners, Rainey has spent her time going to a local public school, and studying. She says her classes include “biology and chemistry and physics, and geography and Arabic and French and English.”

Some of Rainey’s friends are Sri Lankan. Some are Lebanese. She been to Sri Lanka a few times to visit, but Lebanon is home. When she is asked to write down her nationality, she writes Lebanese.

Counting who is Lebanese

But Lebanon thinks differently. Citizenship rules are strict. Lebanese nationality is conferred only through the father (and not the mother). Unlike the US, being born on Lebanese soil does not necessarily make you a citizen. This means that every three years, Rainey has to renew her Lebanese visa. It is up for renewal next week, and she is concerned.

Rainey says, “My friend, when she go to renew her visa, they tell her to go to Sri Lanka.”

When her friend was not able to renew her visa, she had no choice but to leave. Rainey went with her friend all the way to the airport, where they said goodbye through tears.

According to Human Rights Watch, kids from nearly a dozen migrant worker families have already had their visas refused, and many were told to leave the country quickly, sometimes in just a couple of days. In the span of a year, Rainey has had to say goodbye, one by one, to ten of her friends. And very soon, she worries that she will have to leave Lebanon too.

“I don’t know why they make these rules,” she admits. 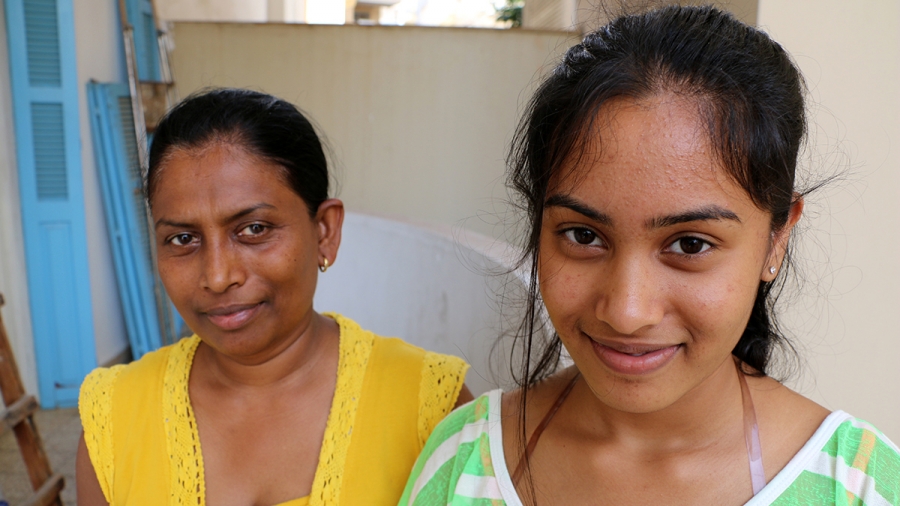 Rainey and her mom stand outside the Migrant Community Center, which provides language classes, cultural programming, and social services for the Asian and African communities in Beirut.

Rainey’s mom, who goes by Souji, is just as baffled. And she is very upset. Souji has worked as a maid in Lebanon for two decades, primarily to give her daughter a better life. All she wants is for her to complete her studies, but she says that Rainey has lost her motivation.

“But now everything finish,” Souji says through tears. “She’s not small baby now — she understand everything.”

This policy comes from the Security General, the government office in charge of immigration and deportation in Lebanon. A senior official there said that they are simply beefing up the enforcement of an existing law that blocks the renewal of a child’s visa if one or both of the parents are working illegally in the country. And the reason for the new enforcement, according to the Security General, is to deal with growing numbers of non-Lebanese in Lebanon. This includes people who cannot be asked to leave, like Palestinian and Syrian refugees.

But a group in Lebanon called the Anti-Racism Movement, says that the parents of some of the kids who have been told to leave do have legal status.

As for Rainey, she is spending what may be her last days in Lebanon playing with friends, learning how to drive, and drawing.

She takes one of her pencil sketches out of a folder. A seashell occupies the center of the page. Behind it, a sailboat floats on the horizon. Rainey says her plan is to become a graphic designer. And when she finishes with that, she wants to try her hand at sailing. As for where she will sail, she says, “Maybe in Sri Lanka ... maybe in Lebanon also.”

Rainey wants to draw and paint as she sails. And when she makes port calls, she will display and sell her paintings. Her goal, she eagerly admits, is “to make people happy.”

To make people happy, in both Sri Lanka and Lebanon.

This story, which is part of our series Young Lebanon, is supported by the Pulitzer Center on Crisis Reporting.