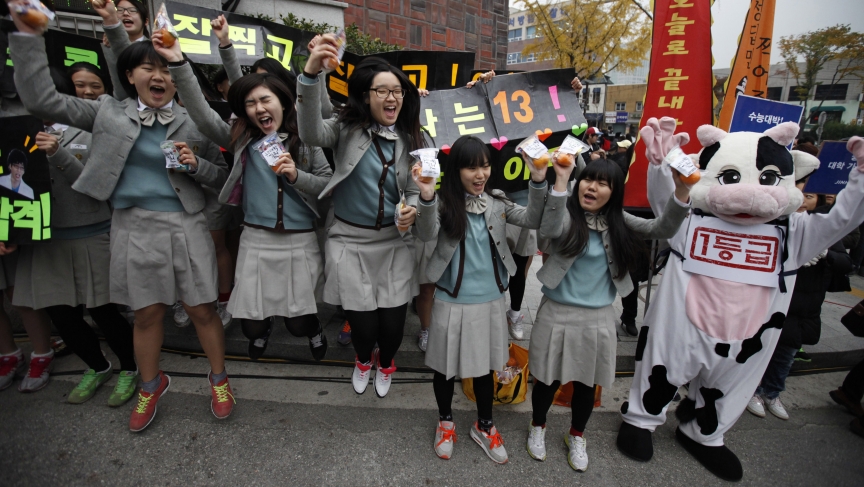 Students from a high school cheer for their seniors in front of a college entrance examination hall before the exam begins in Seoul, South Korea.

This morning, Seoul was surreally quiet. The normally bustling city stopped in its tracks — government offices and private businesses were closed, cars were scarce and no planes flew overhead.

This was the result of official orders issued by the Korean government — all to make sure the country’s high school seniors were clear-headed and prepared for the College Scholastic Ability Test.

“This is the day that every Korean student has feared, but knew it must come,” says Jason Strother, an American reporter based in Seoul. “It is the day, they say, that will decide the rest of their future.”

The exams determine which universities students can get into, much like the SATs in the United States — but the pressure on South Korean students to score high is much more intense.

It's generally an eight-hour ordeal that students have been preparing for, night and day, for years. Many parents even opt to have their children enrolled in after-school tutoring for the exams that go well into the night.

In addition to the flight bans and business closures, a hotline was set up for students running late to get police escorts, more subway cars were dispatched, an extra 1,500 taxis were on the streets to give students rides and cars were banned from the area directly around the test centers.

This obsession surrounding the exams is part of the larger culture of the country, one that is firmly rooted in academic — and, thereby, economic — success. Teenagers are told that by doing well on the exam, that means you’ll get a spot at one of the top three or four Korean Universities, then get a job at a top company — Samsung or Hyundai, generally.

And the implications go beyond that for South Koreans, Strother says. “[South Koreans believe] that will even increase your marriage prospects — that you’ll marry a man or woman of equal social and economic and educational background. ... It all traces back to how well you do on this test.”

Once you understand how much emphasis is put on doing well on these tests, maybe it’s not so shocking that the government is willing to bring life to a standstill for the sake of the students — every adult has been there too, after all.

“Any South Korean will know of the pressure and the intense stress that these students have been going through for the past few years, just preparing for this very one day,” he says.

The pressure on students to succeed has increased in recent years, however. After the 1997 Asian financial crisis, South Koreans began to reprioritize.

“A lot of South Korean families realized that they could lose everything overnight,” Strother says. “It was after that [when] parents started encouraging their children not to go off the beaten track and to follow the example of other successful people, who went to the top universities, who got jobs at the top companies — it was the sure-fire way to success in the eyes of many parents here.”

All that pressure has paid off, too. Currently, South Korean students are some of the world’s most high-performing, especially in math and reading.

But with that statistic comes another, more troubling one.

The nation has one of the world’s highest youth suicide rates.  Also, according to a recent survey of South Korean households, the country’s teenagers are some of the world’s most depressed. Out of the 30 countries involved in the poll, South Korea ranked at the very bottom.

“It cited the educational pressure, especially surrounding this university entrance exam, as the main reason why these kids are all so bummed out,” Strother says.

This was illustrated Wednesday, when a 17-year-old South Korean teen — evidently overcome with stress over the upcoming exam — threw himself out the window of his parents’ apartment building.

“I think this boy’s death was a reminder to all Koreans about the pressure they’ve put on kids,” Strother says. “Every Korean knows that this is a horrible time for students to go through. But they kind of resign themselves to this system, because there’s no other way right now.”

But even for those students who refuse to give in to the academic pressure, there is a huge amount of familial pressure to conform.

“Slackers are few and far between,” Strother says. “I think many South Koreans wouldn’t want to be seen as slackers, because it would be an embarrassment to their family, and there’s a real culture of shame here. And if you’re seen as someone who has disgraced your family by not doing well on the university entrance exam, or messing up in university, that’s a real source of embarrassment.”