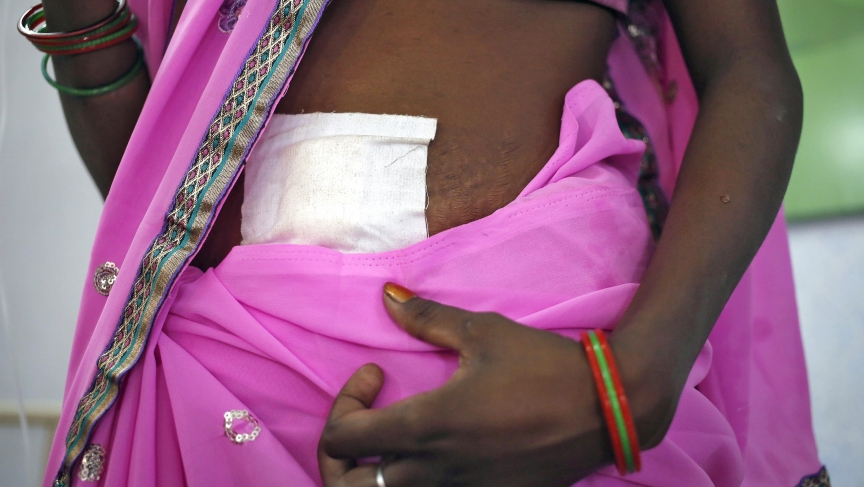 A Indian woman, who underwent sterilization surgery at a makeshift government facility in the Indian state of Chhattisgarh where at least 13 women died.

Authorities in India aren't saying what they think went wrong when a doctor attempted to sterilize 83 women in less than six hours last weekend in the eastern district of Chhatisgarh — with deadly consquences.

At least 13 of those women are now dead. Some 20 more are in critical condition.

The physician who performed the surgeries, Dr. R.K. Gupta, has been arrested — but he insists he was doing nothing wrong. He says, though, that he was working under pressure to meet sterilization quotas set by authorities.

BBC correspondent Yogita Limae has been to the makeshift facility where the botched operations were performed.

"It looked like it hadn't been cleaned in a while. There were cobwebs hanging from the ceiling and from the walls," she says. The building's caretaker told Limae that on the day of the mass sterilization camp, patients were lying on mattresses on the floor just outside the operating theater.

Improvised sterilization "camps" like the one in Chhatisgarh are frequently held in impoverished rural India, where women often don't have access to a hospital or clinic. Last year, at a makeshift facility in West Bengal, women were transferred to open fields for recovery after surgery.

Indian authorities have promoted sterilization since the 1970s, when India became the first country in the world to launch a national family planning program. Prime Minister Indira Gandhi mandated vasectomies, and in just one year, some six million men underwent the procedure. Popular opposition, however, brought the program to a halt.

Today, India is the world's second most populous country with 1.27 billion people. Its burgeoning population is likely to overtake China in 2028. India's federal government has stopped setting quotas for sterilizing men and women, but at the state level, the quotas often still exist.

Although Indian women aren't coerced into sterilization, the government does offer incentives for them, as well as for local officials and healthcare providers.  The women who agree to have the procedure might receive cash — often the equivalent of about $20 — or a cooking utensil or new sari, according to Limae.

She isn't certain whether the deaths in Chhattisgarh will spark changes in how the sterilization camps are run.

"Although we've got national news media all over the story, it is probably something that will be forgotten very soon," Limae says.

The most immediate result, she notes, is that poor rural women in villages like one she recently visited are now afraid of sterilization.