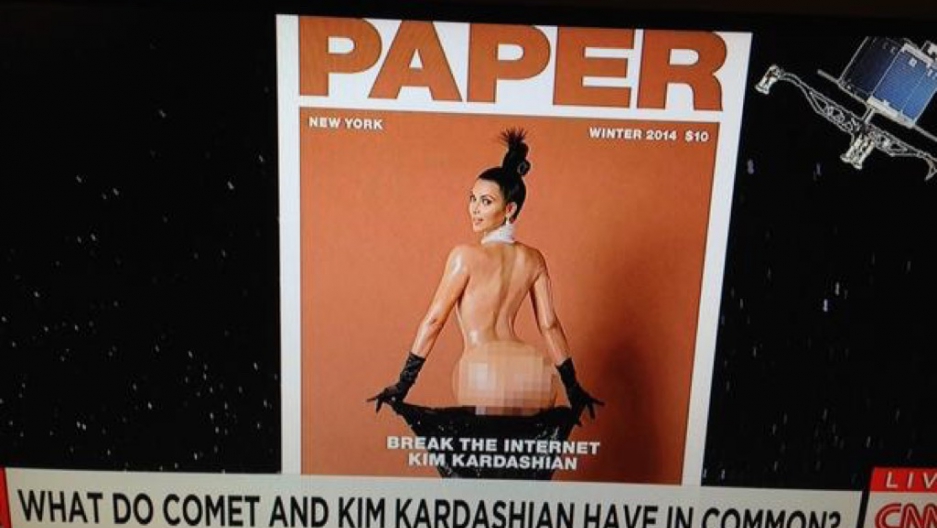 This photo more or less sums up yesterday's news cycle. Kim Kardashian got naked. Humans landed a probe on a comet. That's it.

So what else happened while Kim and the comet were busy ruining our Twitter feeds? Kind of a lot.

Here are seven important stories you might have missed. Finally, there's good news about Ebola in Liberia. The government has ended the state of emergency that it declared three months ago. At the outbreak's peak, Liberia was seeing 500 new cases per day. That number's down to 50. It's a great sign considering Liberia has been the country hardest hit by the epidemic. Of more than 5,000 people who've died, more than 2,800 of them were Liberians. There's still a lot to do there, but at least things are moving in the right direction.

Elsewhere, things aren't so good. There were 421 new Ebola cases in Sierra Leone last week, where the outbreak is worsening, and health workers are striking. Mali, meanwhile, has quarantined nearly 100 people after the death of a nurse who'd treated a man from Guinea who likely died from Ebola, although he was never tested for it. There have now been four cases of Ebola in Mali. The United Nations Human Rights Council is trying to investigate whether Israel committed war crimes during its 50-day offensive against Hamas in Gaza this summer that killed 2,104 Palestinians, almost all of them civilians, and 73 Israelis, most of them soldiers.

There's just one problem: Israel won't let the UN investigators enter Gaza, and refuses to cooperate with the inquiry.

Turning away UN investigators is a very rogue-state thing to do. Remember how big a deal it was when Iraq shut out UN weapons investigators?

Meanwhile, Israel is getting dangerously close to inciting a third intifada. It just approved 200 new settler homes in East Jerusalem, which Palestinians consider the capital city of Palestine, in addition to the 1,000 settler homes approved last month. And there have been weeks of violence surrounding access to the Al Aqsa complex, which sits on one of the holiest sites in both Islam and Judaism. Israel briefly closed the mosque at the end of October, but Palestinians are concerned about more than access.

Some right-wing Israelis hope to tear down Al-Aqsa and build a temple on the site. It's a fringe position, but when the fringe has political power, an occupying army, and a disregard for international censure (see above), anything can happen. Just ask Israeli Housing Minister Uri Ariel, who endorsed the plan while doing a radio interview last week. People in Mexico have been furious since the forced disappearance of 43 students from La Escuela Normal Rural Isidro Burgos de Ayotzinapa in the southern state of Guerrero. And demonstrations are starting to turn violent, understandably, after authorities announced last week that cartel thugs had admitted to kidnapping, killing, and burning the bodies of the students in collaboration with local police.

On Wednesday, protesters set fire to the headquarters of Guerrero's ruling political party, the Institutional Revolutionary Party (PRI). It seems to be a new tactic. A few days earlier, protesters in Mexico City tried to light up the wooden door to the presidential palace.

It's looking like Mexico is officially fed up with its police, politicians, and their failed drug war.

5) US and China struck a major carbon emissions deal Okay, you probably heard about this one. But it's IMPORTANT. So let's revisit it.

Good news for the environment yesterday. The United States and China have brokered a major deal on reducing carbon emissions. China said it planned to "slow, peak and reverse the course" when it came to its own emissions. The peak will come around 2030, apparently. The US will aim to reduce its carbon emissions by 26 to 28 percent of 2005 levels. That should happen by 2025. We've spent the last few months hearing two things about the US strategy to fight the Islamic State in Iraq and Syria — that President Barack Obama is sending more and more "military advisors" to help train and equip groups doing the fighting, and that the US is not putting "boots on the ground," meaning US soldiers won't have combat roles. Obama promises that won't happen

Well get prepared for a broken promise. General Martin Dempsey, the chairman of the joint chiefs of staff, told the House of Representatives armed services committee on Thursday that he'd consider using US troops in combat against IS.

“I’m not predicting at this point that I would recommend that those forces in Mosul and along the border would need to be accompanied by US forces, but we’re certainly considering it,” he said.

7) US urges Myanmar to grant citizenship to the Rohingya and, you know, stop oppressing them Obama's in Myanmar and, happily, it seems his administration won't be ignoring the country's continuous oppression of its 1.1 million Rohingyas. The Rohingyas are a stateless Muslim ethnic minority group that live in deplorable, apartheid-like conditions in western Myanmar. The government wants them to self-identify as "Bengalis," and has a plan to construct detention camps for those who refuse.

US deputy national security adviser for strategic communications Ben Rhodes spoke out against the plan, which he said violated "universal rights," while speaking to reporters.

"We would like to see a new plan that will allow the Rohingya to become citizens through a normal process without having to do that type of self-identification," he said.

Those are very strong words, and they suggest Obama might be ready to wade into a complex, historical, and troubling human rights situation.