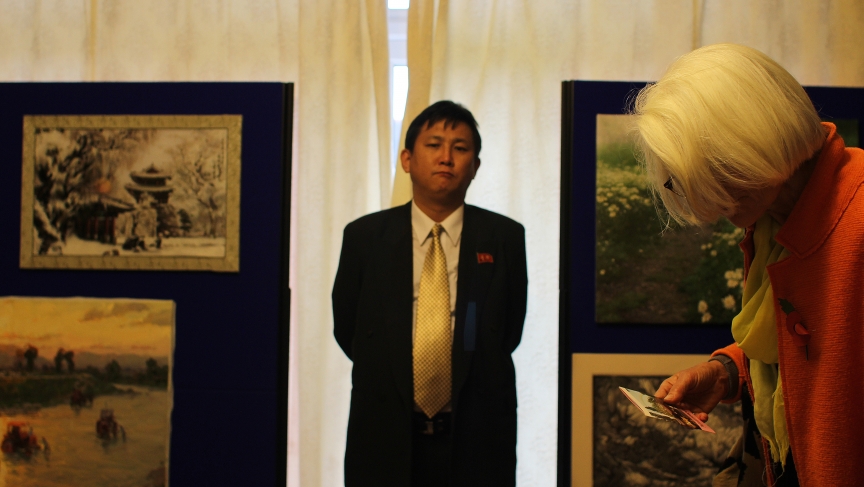 “Would it be OK to take the afternoon off? I’m thinking of visiting North Korea."  As the London producer for The World, I sometimes get to chase stories that are difficult to cover for the rest of the team in Boston.  But in this case, a trip to the Democratic People’s Republic did not involve visa negotiations, hidden identities or convoluted flight plans.

In fact, all I needed was an underground ticket to West London.

For one week only, North Korea’s embassy in the UK was doing something rather out of character: opening its doors to the general public, and holding an art exhibition. A selection of North Korea’s finest paintings had been flown in to show the breadth and grandeur of North Korean culture. Korean artists had even been brought in to paint portraits of London street life.

For me, (and most visitors I imagine) the art was important, but even more intriguing was the chance to see a glimpse of one of the most mysterious states on Earth. That mystery extends even to the London embassy itself. Most national embassies are boastfully palatial buildings in the centre of the city; the Israeli and Russian embassies take up most of one street in Notting Hill. But just as Pyongyang tends follow its own path in global affairs, so does its choice of London real  estate.

The hermit kingdom’s British outpost is an anonymous English family house in the otherwise sleepy West London suburb of Ealing. Like most of the neighbors, it has a family car in the driveway, and a well maintained hedge in the front garden. Unlike its neighbors, it also has a  12-foot flagpole with the North Korean flag fluttering at the top.

On the day I attended, there was a tangible tension between what the embassy wanted to show us, and what most visitors were interested in seeing. Every effort had been taken by the exhibitors to show North Korea in as plain and uncontroversial light as possible. There were no belligerent posters of triumphant marching workers or anti-American caricatures. Instead most of the art was defiantly banal: apolitical oil paintings of frolicking horses, happy children playing apolitically in an apolitical stream, or a pretty ballerina playing a flute (apolitically). When asked questions, the artists and diplomats gave up platitudes about how much they enjoyed painting, and how painting requires study to master correctly.

No one could blame them for playing safe, but the sense of disappointment was tangible. No one comes to a North Korean embassy exhibition to learn about painting. We were there for an old fashioned cold war frisson, some fiery rhetoric and some fanatical leader worship. And what we got were horse pictures.

It was telling that by the far the most photographed pictures in the room were not part of the exhibition — but a shrine to departed leaders Kim Il Sung and Kim Jong Il. At one point there was even a line to get a photo under their portraits, to the irritation of the embassy officials. Of all the strange sights in a strange place, perhaps this was the strangest: North Korean diplomats shooing Londoners away from taking photos of the Dear Leader, and encouraging them to pay more attention to a nice painting of a ballerina instead.