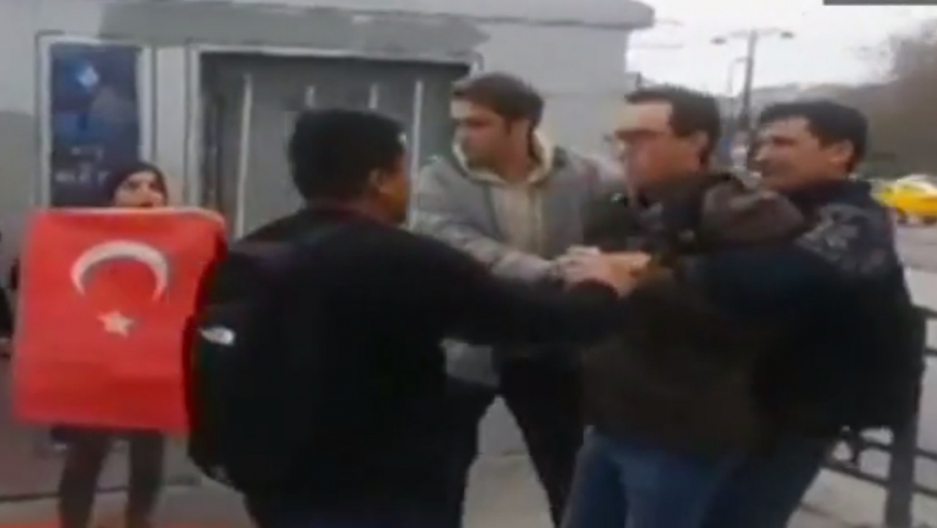 There are endless reasons why people around the world might be angry at the US military. But there's no reason to attack a civilian-clothed Navy sailor on the street. Really not okay.

That's what seems to have happened today on a street in Istanbul, when a gang of Turkish ultra-nationalists harassed and assaulted three US Navy soldiers who were there on leave. As video below appears to show, the soldiers seem genuinely frightened and not at all down for a fight as they're surrounded by members of an extremist group called the Turkish Youth Union. The attackers call them "murderers" and chant "Yankee, go home" while pushing, grabbing, throwing paint, and trying to pull plastic bags over their heads.

It's all very disturbing.

The US Embassy in Turkey responded to the attack in a series of tweets.

(1/4)The video showing an assault on three visiting American sailors is appalling.

(2/4)While we respect the right to peaceful protest and freedom of expression,

(3/4) we condemn today’s attack in Istanbul, and have no doubt…

(4/4)… the vast majority of Turks would join us in rejecting an action that so disrespects Turkey’s reputation for hospitality.

The video is a startling reminder that while Turkey remains a close US ally, the United States is deeply unpopular there.