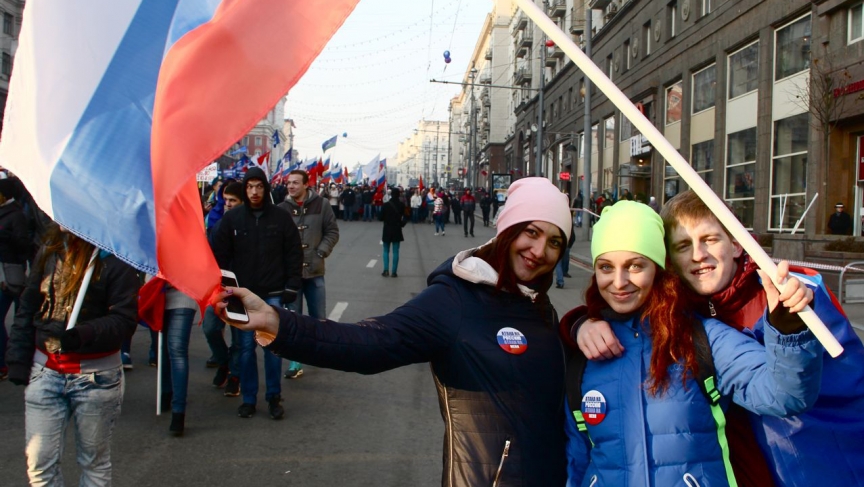 Faced with western sanctions, the Kremlin has pushed for a renewed sense of patriotism among younger Russians. At the National Unity Day celebrations in Moscow, students sport buttons that read, "An attack on Russia is an attack on me."

At a small park across from the one-time headquarters of the  KGB, hundreds of Russians lined up last week for the “Return of the Names.”

It was an annual rememberance of the thousands upon thousands of Soviets executed during the mass purges of the 1930s. It’s organized by the human rights group, Memorial.

All day long, people read the names of Soviet engineers, artists, priests, pilots and others, all shot by their own government. 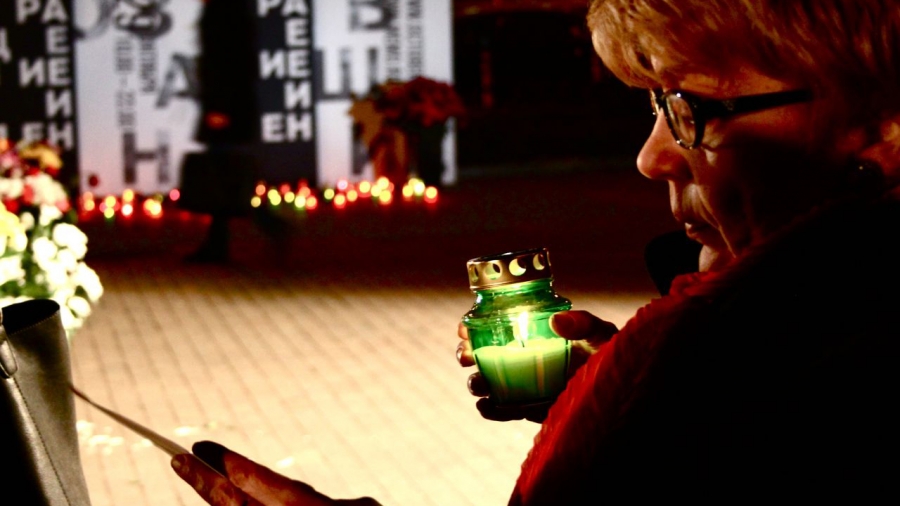 A Moscow woman prepares to read the names of those killed in the Soviet repressions at the annual Return of the Names.

Valentin Zhuralev, whose grandfather was among those purged in 1937, says while it's important to honor the dead, he can't help but notice who wasn't here to take part.

“There’s not one representative here from the government,” Zhuralev says. “I would think that the authorities could join us because they also have relatives who died in the purges.”

The Soviet repressions are an inconvenient truth in today’s Russia, says Zhuralev.

And Memorial is increasingly an inconvenient organization.

It was just a few hundred feet from where the names were read that tens of thousands of pro-democracy demonstrators cheered in 1991 as a monument to KGB founder “Iron Felix” Dzerzhinsky was toppled and carted away.

Those were heady days for Russia's human rights movement, with Memorial in the vanguard.

It was never easy: From Russia’s wars in Chechnya to politically motivated trials and migrant rights, Memorial’s voice of conscience has often been a lonely one. But it has run into particular trouble since Vladimir Putin’s return to the presidency two years ago.

Authorities initially tried to brand Memorial a “Foreign Agent” — a term many Russians associate with traitors and spies — under a wider law that banned foreign funding of Russian NGOs.

Then, in the wake of the war in Ukraine, state TV ran reports accusing Memorial of defending the legacy of Soviet gulag prisoners who they described as Ukrainian “fascists” and “terrorists.” Gulag prison guards were now featured as heroes.

Last month, Russia’s justice ministry announced it would appeal to the courts to “liquidate” Memorial — on a legal technicality. A Supreme Court hearing is scheduled for November 13.

All this government pressure amounts to a “slow suffocation,” says Oleg Orlov, head of Memorial's Human Rights Center. Whatever the the court's decision, Orlov says the attacks are already discrediting Memorial's work in the public eye.

“Everything we learned about the past, it's all being cleansed away,” Orlov says.

These days, it's Putin who has been drawing his own lessons from Russia's past. Over the weekend, the Russian president raised eyebrows when he insisted the 1939 Ribbentrop-Molotov pact that Moscow signed with Nazi Germany to divvy up Eastern Europe wasn’t such a bad thing after all.

In another speech, Putin said the time has come for Russia to stop focusing on the negative aspects of its history and instill a sense of patriotism among a new generation.

This renewed sense of national pride was on display during the weekend's mass National Unity Day. As Europe was celebrating 25 years since fall of the Berlin Wall, thousands of Russians marched near Red Square to show they were united and strong in the face of western sanctions that threaten a new Cold War.

They wore buttons that said, “An attack on Russia is an attack on me.” Signs professed support for President Putin, Russian Orthodox values, and separatist fighters in East Ukraine. And speakers denounced the US and so-called “Fifth Columnists” for seeking to destroy Russia from within. 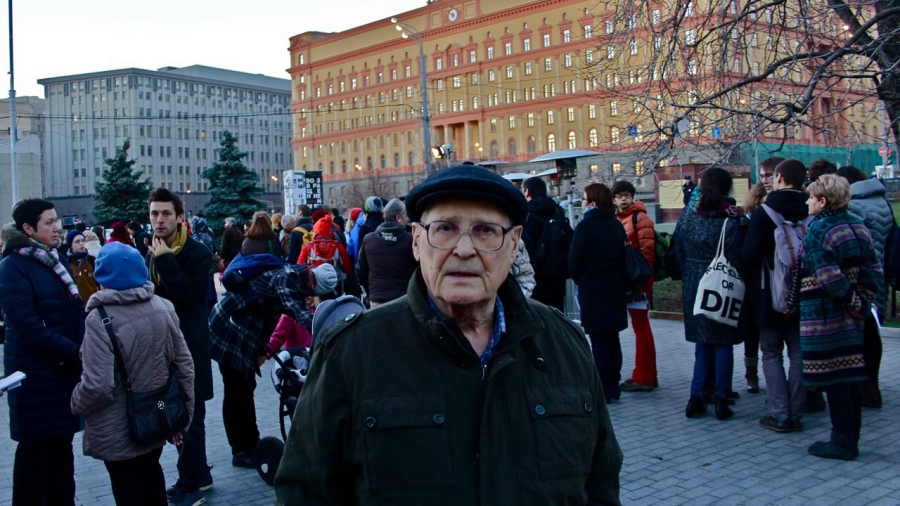 Gulag survivor and human rights activist Sergei Kovolev at Memorial's Return of the Names in Moscow, 2014.  The yellow building behind him is the Soviet KGB headquarters, now home to its successor agency, the Russian FSB.

Sergei Kovalev says he's seen all this before. He spent a decade in the gulag and exile before becoming Russia's human rights ombudsman in the 1990s, and he says this nationalist fervor reminds him of Soviet group think. Only now, he says, the propaganda is more effective, the methods more subtle.

“Closing Memorial like they would have under Stalin — arresting and shooting everyone — that method is now considered unacceptable. But accusing Memorial of following orders from abroad? By all means.”

And here Kovalev can't help but marvel at how everything — and nothing — has changed in Russia: A KGB officer still runs the country, human rights activists are still fighting for their existence, and "Iron Felix" Dzerzhinsky, though gone from his pedestal, still casts a shadow.